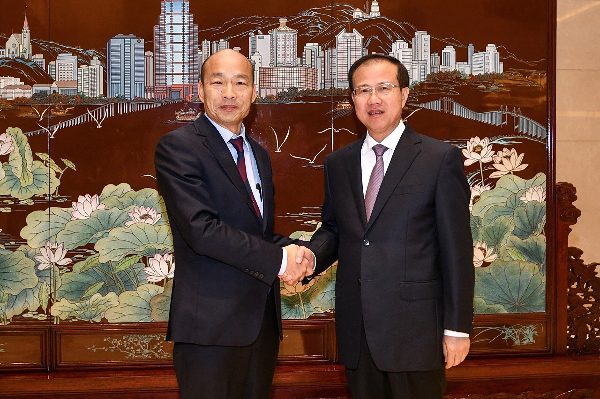 TAIPEI (Taiwan News) – In recent days, Kaohsiung Mayor Han Kuo-yu (韓國瑜) has met with officials in Hong Kong, Macau, and with top liaison officers of the Chinese Communist Party (CCP) in the region, drawing sharp criticism in both Taiwan and Hong Kong.

On Saturday, March 23, Taiwan’s President Tsai, who is on a tour of allies in the South Pacific, was asked by reporters about Han’s meeting with the CCP's Director of the Hong Kong Liaison Office, Wang Zhimin (王志民).

Tsai speculated on whether Han is aware of the “One Country, Two systems” framework being forced upon Hong Kong, and if Han was cognizant of the how his meeting with Wang might be viewed.

President Tsai was quoted by Liberty Times, “I’m just not sure the mayor of Kaohsiung is really alert to this issue.”

Tsai expressed concern that Han’s visit to the China government office in Hong Kong would be propagandized to promote the CCP’s designs for a “One Country, Two Systems” framework in Taiwan. Activists in Hong Kong expressed dismay at Han’s meeting with Wang, warning that if Taiwan is not careful, it may experience a similar fate as Hong Kong.

Han, seemingly unaware of the criticism following his visit with Wang, on Saturday evening proceeded to meet with the CCP’s Director of its Macau liaison office, Fu Ziying (傅自應).

Liberty Times reports that Mayor Han’s meetings with the CCP liaison officers were not reported in advance, or approved by Taiwan’s Mainland Affairs Council (MAC). Following his meetings with Wang, the MAC chided Han, saying that such unannounced meetings with members of the Chinese government should be open and transparent.

Shrugging off the question, Han exclaimed that the contents of the meetings were just “really boring.”

Replying to another reporter, Han exclaimed “What are you worried about? That I am going to sell out Kaohsiung?”

Han is expected to meet the chief of China’s Taiwan Affairs Office (TAO), Liu Jieyi (劉結一), in Xiamen on March 26. Upon his return to Taiwan, the MAC expects Han Kuo-yu to complete a thorough debriefing with the Ministry of the Interior concerning his meetings with CCP officials, reports Liberty Times.