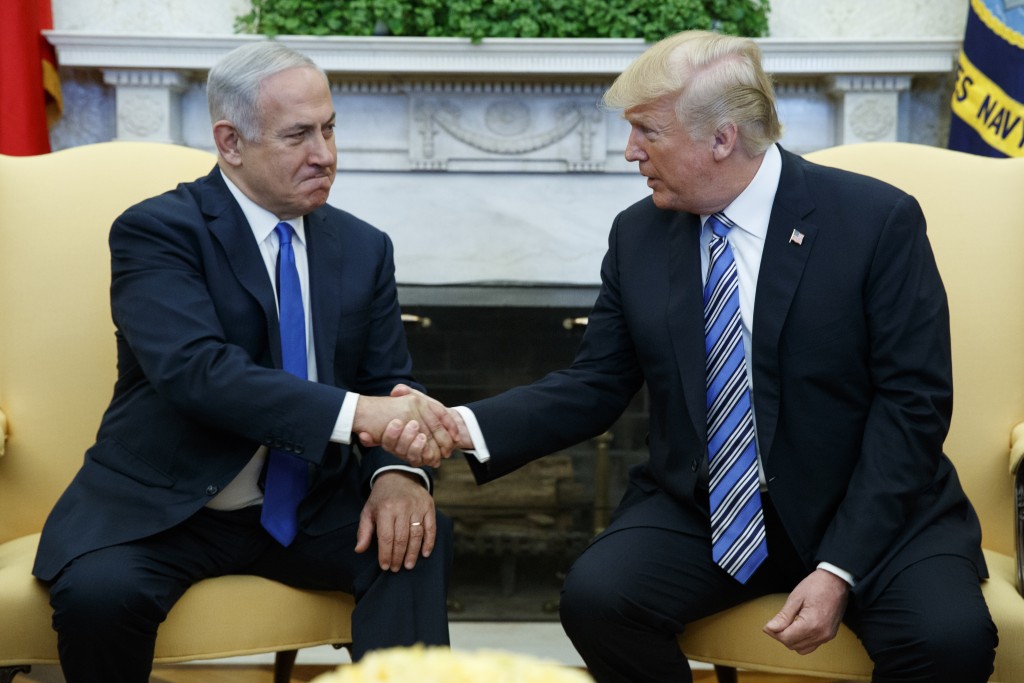 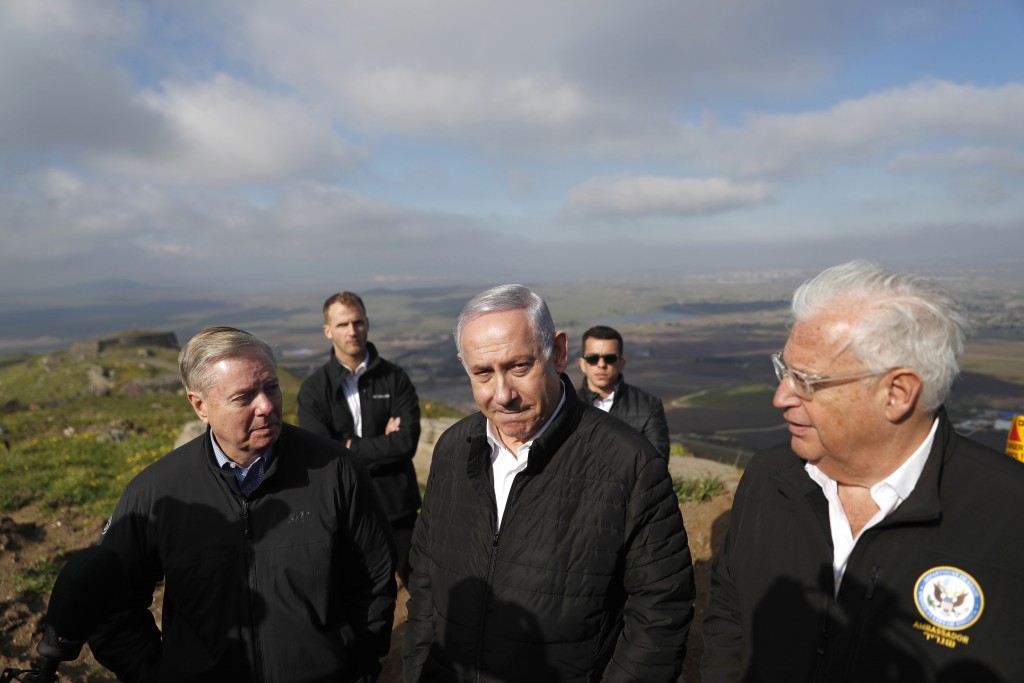 JERUSALEM (AP) — Israeli Prime Minister Benjamin Netanyahu was glowing as he stepped up to a podium in the backyard of his Jerusalem home to welcome U.S. Secretary of State Mike Pompeo to a holiday dinner.

Less than an hour earlier, President Donald Trump had surprised the world by announcing that the U.S. would reverse policy and recognize Israeli sovereignty over the Golan Heights, a strategic plateau that Israel seized from Syria after the Six-Day War of 1967.

Senior U.S. and Israeli officials had been told privately that such an announcement was in the works, but that it wouldn't come until Netanyahu visited Washington next week.

Instead, Trump abruptly tweeted the news, delaying the Thursday dinner celebrating the Jewish holiday of Purim so Netanyahu could call the president to thank him.

"We have a miracle of Purim," Netanyahu said, beaming broadly at his wife, Sarah, the secretary of state and U.S. Ambassador to Israel David Friedman, as they sat outside on a chilly evening. "President Trump has just made history."

The effusive praise of Trump by Netanyahu is characteristic of their mutually beneficial relationship, more pronounced than perhaps any previous alliance between leaders of the two countries. The surprise recognition of the Golan was just the most recent of many examples.

"The Trump-Netanyahu relationship has no precedent," said Alon Pinkas, a former Israeli consul-general in New York. "They see eye to eye."

Their unusual connection began as soon as Trump took office, when Netanyahu was among the first foreign leaders to visit the White House. Trump appreciates the praise Netanyahu has lavished upon him — compared with the more restrained reaction from other foreign leaders. And boosting Israel plays well with his political base, which is heavy with conservative Christians who see it as a top priority. Trump has deputized son-in-law Jared Kushner, whose family has longstanding personal ties to Netanyahu, to work on a Middle East peace plan, though details of that strategy remain unclear.

The value of the Golan announcement for Netanyahu appeared obvious at the backyard podium at the Purim dinner. He exuded a confidence that belied whatever concerns he may have about a series of corruption scandals and looming possible criminal charges that have engulfed him in recent months and turned Israel's April 9 election into an unexpectedly close race between him and a popular former military chief. Netanyahu has denied all charges.

"For those on the fence, it will enhance his standing for sure," said Eytan Gilboa, professor of politics at Bar-Ilan University. "The Golan Heights recognition, warm White House reception, personal dinner with Trump. It will both divert attention away from his pressing domestic concerns and make him appear as a great world leader."

Their relationship will be on display again this coming week. Netanyahu will be in Washington for the American Israel Public Affairs Committee annual conference and will be hosted at the White House for a meeting and a dinner - his third trip there since Trump took over.

Even before the Golan move, Trump has repeatedly and radically altered U.S. policies related to Israel, siding with Netanyahu at the expense of the Palestinians and to the dismay of longtime U.S. allies in Europe and others.

He recognized Jerusalem as Israel's capital, moved the U.S. Embassy from Tel Aviv, eliminated hundreds of millions of dollars in aid to the Palestinians, closed their representative office in Washington, and ended the decades-long practice of opposing Israeli settlement activity in the West Bank in what would be the core of a future Palestinian state.

Trump also withdrew from the landmark 2015 Iran nuclear deal, which Netanyahu had fiercely opposed, and re-imposed stringent new sanctions on the country that Israel regards as an existential threat. And he pulled the U.S. out of several U.N. organizations, the U.N. Human Rights Council and UNESCO, citing anti-Israel bias in their agendas.

But their association has not helped Trump win over Jewish American voters, and has complicated Netanyahu's relationship with the American Jewish community, who vote overwhelmingly Democratic. Many have expressed dismay over Netanyahu's close ties with the president.

And Trump has used his Israel policies to needle his Democratic opponents. He routinely cites his support of Israel, not to mention his friendship with Netanyahu, as proof that critics are wrong when they say he fails to denounce white nationalism or anti-Semitism. And, he has used it as a cudgel to bash Democrats who are not in lockstep with his policies.

"The Democrats have very much proven to be anti-Israel," Trump said Friday. "There's no question about that. And it's a disgrace. I mean, I don't know what's happened to them but they are totally anti-Israel. Frankly, I think they're anti-Jewish."

A strong majority of American Jews supported Democrats in the midterms and in 2016, but the party is divided over the U.S.-Israeli relationship. That came to a head last month, when freshman Democratic Rep. Ilhan Omar of Minnesota, one of the first Muslim women in Congress, insinuated that lobbyists with the American Israel Public Affairs Committee, or AIPAC, were paying lawmakers to support Israel, a remark that drew bipartisan criticism.

Nearly all of the declared 2020 Democratic presidential candidates, including Elizabeth Warren, Bernie Sanders, Beto O'Rourke and Kamala Harris, have said they won't attend the AIPAC conference this year, though other prominent party officials will be there.

Jeremy Ben-Ami, president of J Street, a liberal pro-Israel organization, said the Trump-Netanyahu alliance has tested the committee's traditional commitment to bipartisanship. J Street has encouraged Democrats who attend the upcoming AIPAC conference to use the stage to denounce Netanyahu's hardline policies.

"When your role as an organization is to support those in power, you end up getting dragged along," he said.