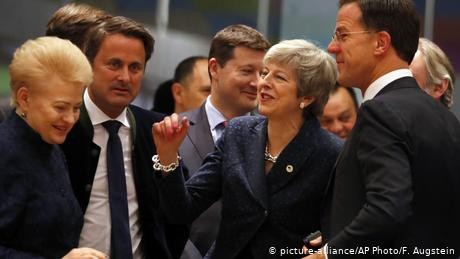 The UK has been seeking an extension on the Article 50 exit process to allow for an orderly exit.

European Council President Donald Tusk said at a press conference: "The UK government will still have a choice of a deal, a no deal, a long extension, or revoking article 50. The 12th of April is the key date in terms of the UK deciding whether to hold European Parliamentary elections. If it has not decided to do so by then, the option of a long extension will automatically become impossible."

European Commission President Jean-Claude Juncker said the remaining 27 member states had backed up his legal offers to the UK on the Irish backstop, also known as the Strasbourg Agreement.

British Prime Minister Theresa May said after the meeting that she had accepted the EU's offer and welcomed the confirmation of the Strasbourg Agreement. "This should give extra assurance to parliament that, in the unlikely event the backstop is ever used, it will only be temporary." She called on British MPs to accept the deal, saying it would be wrong to participate in the European elections.

The new offer will grant May critically-need time to push her twice-rejected deal through parliament and avoid a hard Brexit. The offer could also keep alive the remainers' dreams of staying in the EU as well help scare Brexiteers into accepting the deal to avoid such a scenario.