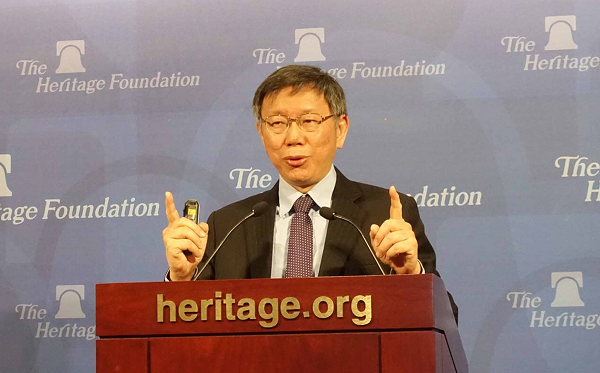 In an address titled, “The Present Situation and Prospects for Taiwan,” Mayor Ko characterized his policies as representing a third option for Taiwan’s cross-strait relations, asserting that Taiwan can be “close to America, but also friendly with China.”

According to Ko, both current KMT and DPP platforms make it difficult for Taiwan to build “mutual trust” or have meaningful dialogue with China. The U.S. is a longstanding friend and ally of Taiwan, but that does not mean China should be seen as an enemy, Ko said.

Speaking in English at the conservative think tank, Ko explained how he envisions electoral campaigns as social movements directed at changing culture in Taiwan. Ko specified that he views his political career as an opportunity to transform the political culture of the country.

A key aspect of Ko’s remarks was his discussion of “Taiwan values,” which are the same as many values considered to be universal throughout developed Western nations. Ko said “democracy and freedom” are "core values" for Taiwan.

Ko’s tour of the United States and his address in Washington are seen by many observers as a stepping stone toward a bid for the presidency in Taiwan.

In his remarks, Ko touted his unique position on Taiwan’s political landscape and emphasized his pragmatic outlook, based upon his background as a surgeon.

Taiwan must be "wise" in the midst of a conflict between China and the U.S. says Ko, and not attempt to manipulate relations with either side to Taiwan's advantage. Ko stressed that the well-being of citizens should always be first priority.

In comments after his address, Ko recognized that Taiwan’s value system is much closer to that of the United States than China. Even so, Ko said that Taiwan and China share a clear cultural affinity with one another.

Using a metaphor to illustrate his point, jokingly mentioning Chinese tech giant Huawei, Ko said “(Taiwan’s) hardware is made in China, but the software is from the United States.”

Ko’s full address at the Heritage Foundation can be viewed below. 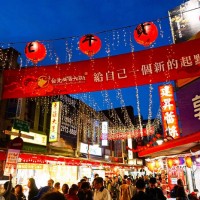