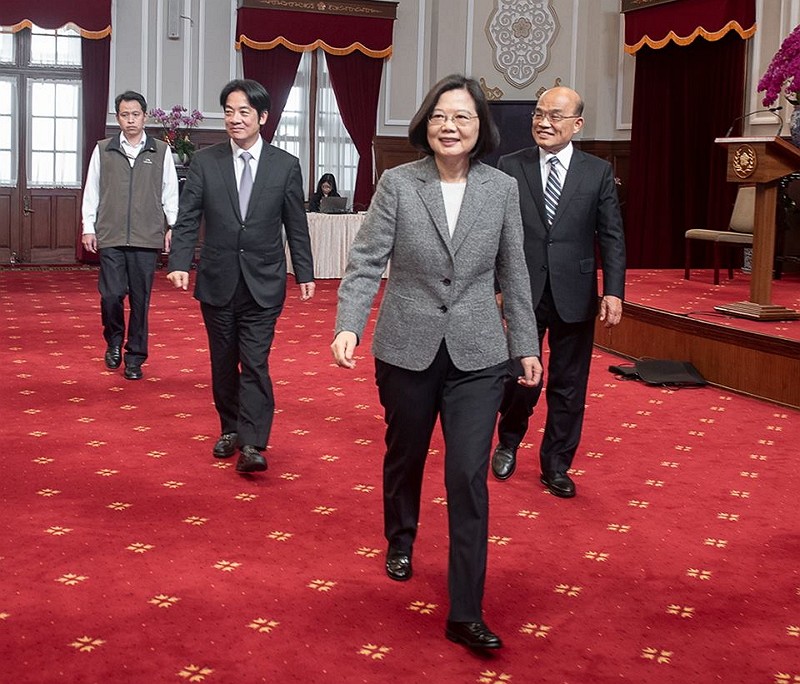 President Tsai Ing-wen (蔡英文) will embark on a visit to three Pacific allies Thursday, a trip that will include a stopover in Hawaii on her way home, according to the itinerary released by the Ministry of Foreign Affairs (MOFA).

Tsai will visit Palau, Nauru, and the Marshall Islands from March 21 to 28 on her sixth overseas trip since taking office in May 2016.
She will visit Palau from March 21 to 23 and Nauru on March 24 and 25 before arriving in the Marshall Islands on March 26 for the first-ever Pacific Women Leaders' Coalition Conference, to be held March 26-27, the MOFA said.

Tsai will fly to Hawaii from the Marshall Islands on March 27, and is scheduled to return to Taiwan at 8:20 p.m. on March 28.
She will be accompanied by Foreign Minister Joseph Wu (吳釗燮), Health Minister Chen Shih-chung (陳時中) and Icyang Parod, head of the Council of Indigenous Peoples, as well as several lawmakers, the ministry said.

During the eight-day trip, Tsai will deliver speeches at the Parliament of Nauru and the Pacific Women Leaders' Coalition Conference.
Meanwhile, the Presidential Office unveiled Tuesday the gifts prepared by Tsai for her counterparts in the three Pacific allies. They include an oil painting, titled "Life in Endless Succession," by Miru Hayung, an artist from Taiwan's aboriginal Atayal tribe.

The gift prepared for Nauru President Baron Divavesi Waqa, who is passionate about music, is a guitar made of driftwood from the flooding triggered by Typhoon Morakot in southern Taiwan in August 2009.

The "wild guitar" was crafted as a reminder of nature's power, Chang said.

Another item made of driftwood created by Amis artist Iyo Kacaw, called "Seed Lamp," has been prepared for Tsai to present to Nauruan Parliament Speaker Cyril Buraman when she delivers a speech in Nauru's parliament.

Tsai will present Marshall Islands President Hilda C. Heine a rush-woven artwork that depicts the deep love that exists between a mother and her daughter, Chang said.

Heine is the first female president of a Pacific island nation.