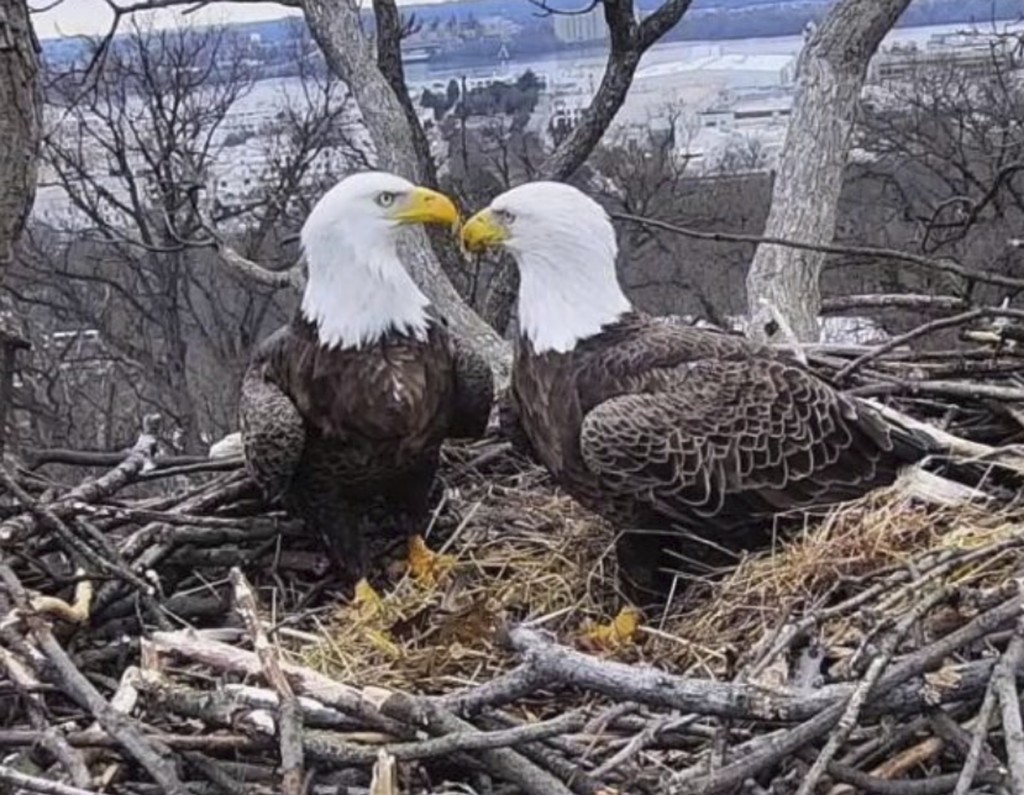 WASHINGTON (AP) — It's a tale with everything you'd need for a soap opera: star-crossed lovers, a stable relationship threatened by younger suitors, pregnancy and loss, and a hungry raccoon.

Washingtonians, along with a global community of eagle-watchers, have been transfixed this winter by Liberty and Justice, bald eagles who've nested and raised eaglets together for 14 years on the grounds of the city's police academy.

Their annual mating ritual, egg-laying and hatching process normally draws thousands of viewers to a special eagle cam. But this year has been unusually dramatic, with twists and turns that became headline news outside the eagle-watcher community.

"It's been a roller-coaster ride," said Tommy Lawrence, managing director of the Earth Conservation Corps, which runs the eagle cam and has been instrumental in repopulating the local bald eagle community. "People kind of take ownership of the eagles and really become invested in their well-being."

The saga of Justice and Liberty isn't the capital's only eagle drama. Last Wednesday, the Blue Line of Washington's Metro was delayed to rescue an injured bald eagle from the tracks . The bird later had to be euthanized.

But the bigger drama involved Liberty, the female, and Justice.

Their mating season started normally. Together they prepared the nest they've shared for 14 years. They mated on Feb. 9. Normally at that point, Liberty would lay eggs — usually two — and spend most of her time sitting on them while they incubated and the male sought food for the family.

But this year, Justice disappeared almost immediately after mating, leaving Liberty with no way to gather food while keeping the eggs warm. During his absence a younger male eagle began appearing at the nest and courting Liberty. Researchers named him "Aaron Burrd" and speculated that he had fought Justice and driven him from the territory. A second young male rival also made some appearances.

After about 10 days, Liberty began making short flights away from the nest, meaning the temperature of the eggs dropped too low to hatch. On Feb. 23, Liberty flew away with one of her new suitors for two days, essentially abandoning her nonviable eggs. The next day, Justice reappeared after a more than two-week absence to reclaim his place. When Liberty returned, she didn't accept him back at first but gradually they reconciled.

Then came a final Darwinian twist. While the reunited pair was away from the nest, a raccoon climbed up and ate both eggs live on camera . Nothing was actually lost. The eggs were never going to hatch. But Lawrence said some newer eagle-cam devotees didn't fully understand what had happened.

"The reaction was intense," Lawrence said. "People would start freaking out on Facebook and asking why we didn't rescue the eggs and then some older members of the community would calm them down."

When interviewed Friday by The Associated Press, Lawrence announced breaking news: Justice and Liberty, after slowly rekindling their relationship, had mated the day before. Now the watch is on to see if Liberty is still fertile this late in the mating season and will lay more eggs. Justice, by the way, has continued his mysterious disappearances. On March 7, he vanished for five days before returning.

"We don't know where he keeps going," Lawrence said. "Our minds go to 'Does he have a second nest somewhere?' "

The twists and turns have been covered by multiple local media outlets with Kardashian-level of detail. Now speculation is running hot as to whether Justice and Liberty have a long-term future together or whether the younger suitors are a glimpse of the future.

"It does seem like there's all these young bucks out there looking for some action," Lawrence said.

If the aging Justice is going to face regular challenges from younger males going forward, Lawrence said he might discover that his mate is fiercely loyal — to the nest.

"The female will give up her mate before she gives up her nest," he said. "Liberty basically has the keys to the house and she decides who she lets in."

The cult-like following for the eagles is a testament to the wildly successful mid-1990s campaign to bring them back after they had died out locally in the late 1940s. Starting in 1994, the Earth Conservation Corps brought 16 new eagle hatchlings — four per year — from Wisconsin and raised them locally so they would develop an affinity for the area. Mature eagles leave the nest after four months to six months, and leave their home territory for several years, then frequently return to their home area to mate — "like going to college," Lawrence said.

Eagles generally live about 30 years, so that first batch of eaglets would be a middle-aged 25 now, but much of the now-healthy local bald eagle population is presumed to be the children and grandchildren of those first few hatchling batches.

Dan Rauch, a wildlife biologist who is responsible for Mr. President and The First Lady, praised the following that has developed around both local eagle cams.

"The community is great! Some people are very involved and are watching all day. They really have an emotional investment in these birds," he said.

Rauch attributes the popularity to the comeback story, the eagle's status as America's national symbol, and the natural fierce magnetism of the winged predators.

"The bald eagle itself is a very charismatic animal," he said.

Lawrence said he has learned not to underestimate the power and devotion of the eagle-watcher community. He recalls last year when a special cable malfunctioned and knocked out the eagle cam. Lawrence put out an appeal on Facebook asking if any IT professionals could donate their time and take a look.

"Literally a few hours later I get a call from the people who lobby for Verizon saying, 'We've received a bunch of phone calls, including from two congresswomen, asking us to fix this,' " he said.