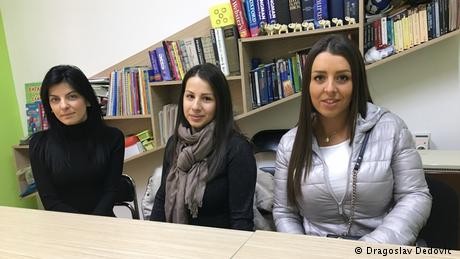 "A whole group of medical staff from the local emergency room took our German classes," says Filip, who 10 years ago founded a language school in the Serbian city of Leskovac, adding that "now, they're all in Germany." Filip says people used to want to learn English. But today, German is all the rage. Filip, incidentally, does not want us taking his picture — typical for people living in rural Serbia, who by and large prefer to avoid saying or doing anything, even mentioning facts, that could be read as criticism of the government.

Young Serbs eager to move away

Jovana, Angelina and Miljana are three trained nurses from Serbia who have taken special German classes at Filip's language school. Now, they're ready to work as nurses in Germany. Jovana and Angelina have already signed contracts with Hamburg's Asklepios clinics. And Miljana will relocate to the German town of Tübingen, where she will work at the university hospital.

None of them objects to being photographed or filmed, because they are no longer worried about what other Serbs think of their plan to pack up and leave. Jovana offers a simple yet convincing argument for her decision: "There was no work for me here." And that's why she's now relocating to Germany.

No jobs in Leskovac

The impoverished city of Leskovac was once the heart of Serbia's textile and pharmaceutical industry. Yet the days when some affectionately referred to Leskovac as "Serbia's Manchester" are long gone. Back in the day, almost 100,000 called this city home. Today, the population has fallen to fewer than 70,000.

Jovana, who is 24 years old, has been to Germany three times already to look for jobs. Employers in Hamburg and Berlin were happy with her and she liked the look of the work. "When I was there I realized that there is very little difference between how we do our jobs in Serbia and how they're done in Germany," says Jovana. But, she says, in Germany nursing and caring are two distinct vocations, and the number of patients is limited — which she says isn't the case at home. "In Serbia, a nurse will also care for patients and may even look after an entire hospital floor."

There is even paid overtime...'

Angelina, who is just 19 years old, had wanted to work as a nurse in Serbia. But she says it's not really about what qualifications you have. "My neighbor used to work as a hospital cleaner," Angelina recalls. "And then she took a crash course and started working as a nurse." Proper qualifications, apparently, matter very little in Serbia, as 26-year-old Miljana agrees. "People get jobs for other reasons; that's why I want to make a better life for myself in Germany."

Jovana says that unlike in Serbia, job qualifications really do matter when working in Germany. And the pay is better, she says. "There is even paid overtime, and the employer pays for your public transport ticket." In addition, at her new job there's a canteen; they will help her find an apartment and pay for two-month language classes. Jovana, Angelina and Miljana all praise the Cologne-based job agency that helped them find work in German hospitals, as well as their experiences while dealing with their future employers.

The average monthly income in Serbia is just €400 ($453). And according to official figures, 12 percent of Serbs are without work. Some experts say that without people leaving the country, the number could rise to 20 percent. Young Serbs, in particular, struggle to find gainful employment; the unemployment rate among them is almost 30 percent.

The mass exodus of Serbs looking to find work abroad is a blessing and a curse for the country's government: it helps artificially lower the unemployment rate but is not sustainable in the long term. Serbia's Labor Ministry has now created a special commission to come up with ideas on how to reduce the emigration of Serbian nationals.

This has no implications for Jovana, Angelina and Miljana. They all plan on starting a brand new life in Germany and never returning to Serbia. They want to start families in Germany, though their parents aren't too happy about this. Even though they admit that finding work in Serbia is tough — even for medical professionals.

When Serbia was part of socialist Yugoslavia under Josip Broz Tito's rule, unemployment was a major problem, too. Yugoslavia dealt with this by exporting workers abroad, so to speak. Then, in the early 1990s, Yugoslavia began falling apart and descending into bloody wars. Between this time and the present, some 1 million people left Serbia — a huge problem for a nation with a population of just 7 million. And the population continues to shrink, with 35,000 people emigrating each year — one of the highest emigration rates in the world.

A third of Serbs have considered emigrating

Jovana says that Serbia is suffering great harm through the fact that she and many others like her are leaving the country. "Those with good qualifications are moving away, and I know plenty of people who have already gone," she says, adding: "It's not just young people who go; sometimes it's entire families, or people with more than 20 years of work experience."

According to a 2018 survey by the Regional Cooperation Council (RCC), 32 percent of Serbs said that they had toyed with the idea of leaving their country. That is far more people than in any other Western Balkan country.

And so, rather unsurprisingly, German remains a popular foreign language in Serbia. This means good business for Filip and his language school, though he does wonder what the future holds if everyone leaves. "When everyone goes to Germany, who will look after me and my kid if we need medical treatment?"