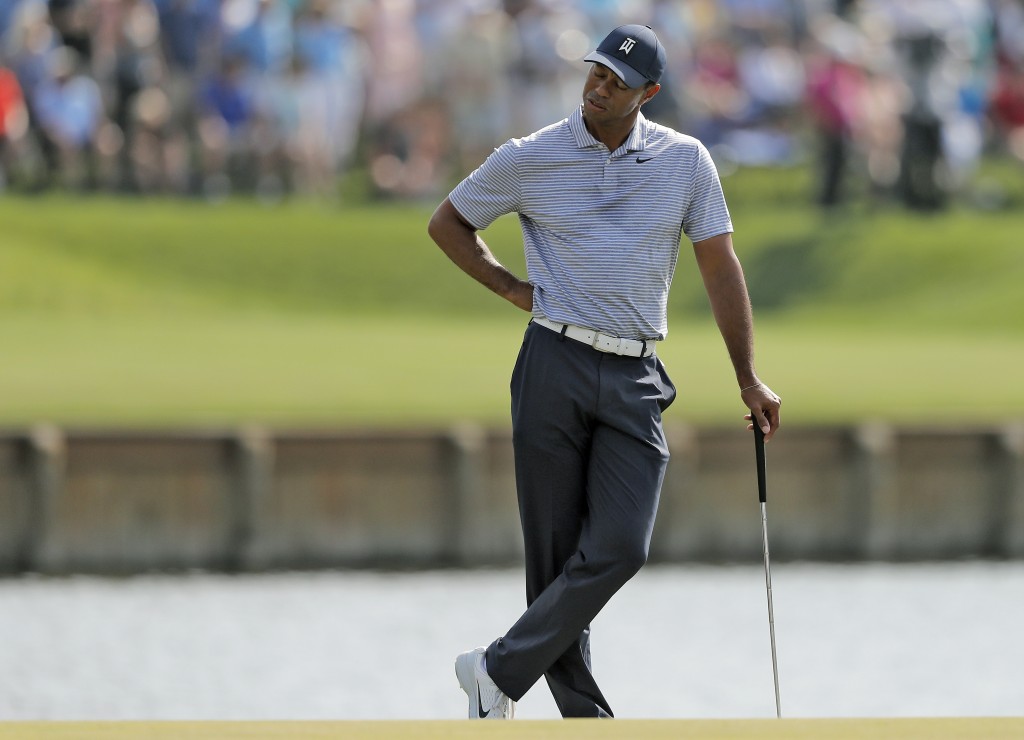 PONTE VEDRA BEACH, Fla. (AP) — Tiger Woods could have avoided the water on his second attempt to the island-green 17th under the new Rules of Golf.

Instead, he hit a second shot into the water and made quadruple bogey.

It raises anew the semantical question that has been around as long as The Players Championship has been held on the TPC Sawgrass: Is the notorious island green really an island?

Woods hit his pitching wedge to a back pin on Friday that was a little left and a little long. It rolled off the green and started to go down the walkway when it tumbled over the wooden frame and into the water.

Typically, players hit again from the tee or go to the drop area some 90 yards away. Woods did the latter. That shot was too strong and one-hopped over the green and into the water. It was the first time Woods hit two balls into the water on the 17th hole, and it led to a quadruple bogey. He was nine shots back going into the weekend.

But under the new rules — and based on where his first shot went into the water — Woods could have dropped on the grass walkway some 40 feet away and had a straight chip, or even a putt, toward the pin for par. Odds are the worst he would have made was bogey.

There were questions on social media, and Golf Channel's crew of analysts — David Duval, Brandel Chamblee and Frank Nobilo — went back to the spot in darkness Friday night to inspect the option.

Because players now can use one club length for the drop involving a yellow hazard, Woods could have used that to his advantage.

"It was interesting," Duval said Saturday morning. "I texted with Tiger last night. He didn't know. I think in the future they should have a spotter there to let guys know. Because the assumption is you have to go to the drop area. The rules are there to protect the entire field."

Previously with a yellow hazard, one option for players was to determine where the ball entered the hazard, keep a direct line between that point and the pin, and go back on a straight line as far as they wanted.

In this case, there would have been no place to stand because the walkway is right next to the water.

Under the new rules for yellow hazards, the relief area is one club length in any direction no closer to the hole (two club lengths for a lateral drop from a red hazard). That means Woods could have indicated where his ball crossed the yellow line, moved it one club length to the right (away from the wooden frame) and had a chip or a putt.

Li Haotong hit a similar shot Friday, went to the drop area, hit to 20 feet and two-putted for double bogey. Li missed the cut by one shot.

On the 17th hole, the option most likely comes into play with a back pin. Duval believes having a spotter there would let players know what's possible. That said, it's still up to the player to understand what the rules allow.

Jordan Spieth had a similar incident on the fourth hole Friday when his ball went into the water. Instead of dropping short of the green — for a shot over the water not nearly as daunting as the 17th — he called an official and was able to go back in a straight line on the back side of the green, and hit a flop shot to 6 feet to escape with bogey.

So is it an island?

"It's not now," Duval said with a laugh.