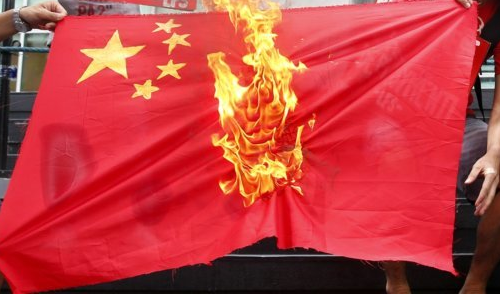 The India Times reports that a prominent network of trading companies, the Confederation of All India Traders (CAIT) announced a mass demonstration for March 19, and called on its 70 million member-strong group to burn Chinese products across India to “teach China a lesson.”

The anger erupted after China’s use of its veto power in the UN to protect terrorists operating under the protection of its ally, Pakistan. Masood Azhar is the leader of the militant Islamic group known as Jaish-e-Mohammed (JeM).

Masood Azhar and the JeM group arm and train militants in the Kashmir region to attack Indian forces. They are also thought to be responsible for a number of terrorist attacks in Indian cities and international kidnappings over the past two decades.

Hashtags like #BoycottChina, #BoycottChineseProducts, #BuyIndian , and even #Chinabacksterror are spreading across the Indian internet, with many users urging Indians to purchase domestic products or those from nations like Taiwan, Japan, or South Korea instead of supporting Chinese companies, reports Yeni Safak.

Other Indian netizens are calling on companies with Chinese sponsors or partners to cancel their business arrangements to support the national cause.

According to the India Times, India imports about US$75 billion in Chinese products every year. In response to China’s support of the JeM organization and its refusal to recognize its leader as a terrorist, CAIT has declared an nation-wide attack on China’s economic influence in the country.

"It will be a Holi of Chinese goods and we will burn them across the country on March 19," the secretary general of the trade organization declared in a Friday statement.