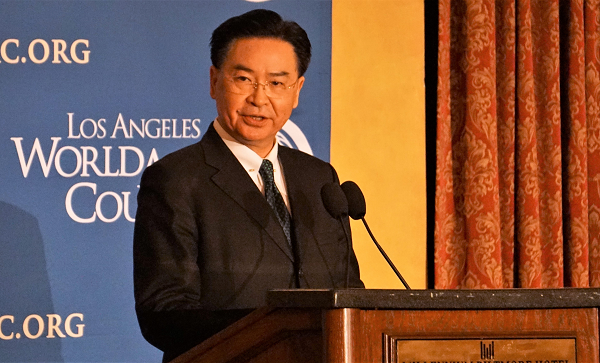 Wu said that Taiwan and Japan have mutual interests and face similar threats in the region. He noted that there is ample room for closer ties and cooperation on issues of maritime security, cyber-crime, as well as natural disaster response and climate change.

The Foreign Minister’s remarks echo those of President Tsai Ing-wen, who gave an exclusive interview with the Japanese newspaper, the Sankei Shumbun, at the beginning of March. Tsai called for renewed security dialogue in light of the increasing threat China poses to the region.

In Thursday’s appearance before the press, Joseph Wu voiced his support for establishing a permanent diplomatic mechanism to streamline communication between the two nations in situations that require an emergency response, reports NHK.

Wu declared that Taiwan must be proactive in preparing for China’s ever-expanding campaign of political suppression and military threats aimed at Taiwan. He also mentioned Beijing’s efforts to erode the faith of the Taiwanese public in their own democratic institutions, reports VOA.

Earlier this week on March 11, Joseph Wu gave a brief address at the Los Angeles World Affairs Council in the United States, where he shared a message calling on partner nations throughout the world to help defend the democratic values which Taiwan represents.