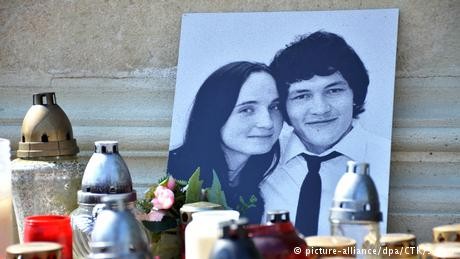 A man has been charged with ordering the killings of investigative journalist Jan Kuciak and his fiancee, Martina Kusnirova, last year, Slovakian authorities announced on Thursday.

Special prosecutors identified the suspect as Marian K., withholding his last name as is standard practice in Slovakia, adding that they believe the contract killing was tied to Kuciak's investigative work.

"The motive for the murder was Kuciak's work as a journalist. The investigator (has based the charge) on objective evidence that can't be specified at the moment," one of the prosecutors said.

Kuciak and Kusnirova were gunned down in their home in February 2018.

Businessman believed to be behind murders

Slovakian media reported that the suspect was a politically connected businessman who had long been suspected of being involved in the crime.

Kuciak had been investigating the man's business activities at the time of the killing.

The 27-year-old had also gone to the police a few months before his death, saying that Marian K. threatened to collect information on him and his family. Police did not press charges at the time.

Kuciak had also been investigating possible government corruption as well as ties between Slovakian politicians and the Italian mafia.

Prosecutors added that no Italian nationals were believed to have been involved in the murders.

Four other people have been charged over the slayings, including a woman who was also charged with ordering Kuciak's murder.

The other suspects include a person who allegedly financed the contract killings as well as the person who prosecutors believe carried out the crime.

Kuciak and Kusnirova's deaths sparked massive protests in Slovakia, leading to the eventual dismissal of the national police chief as well as Robert Fico's resignation as prime minister.