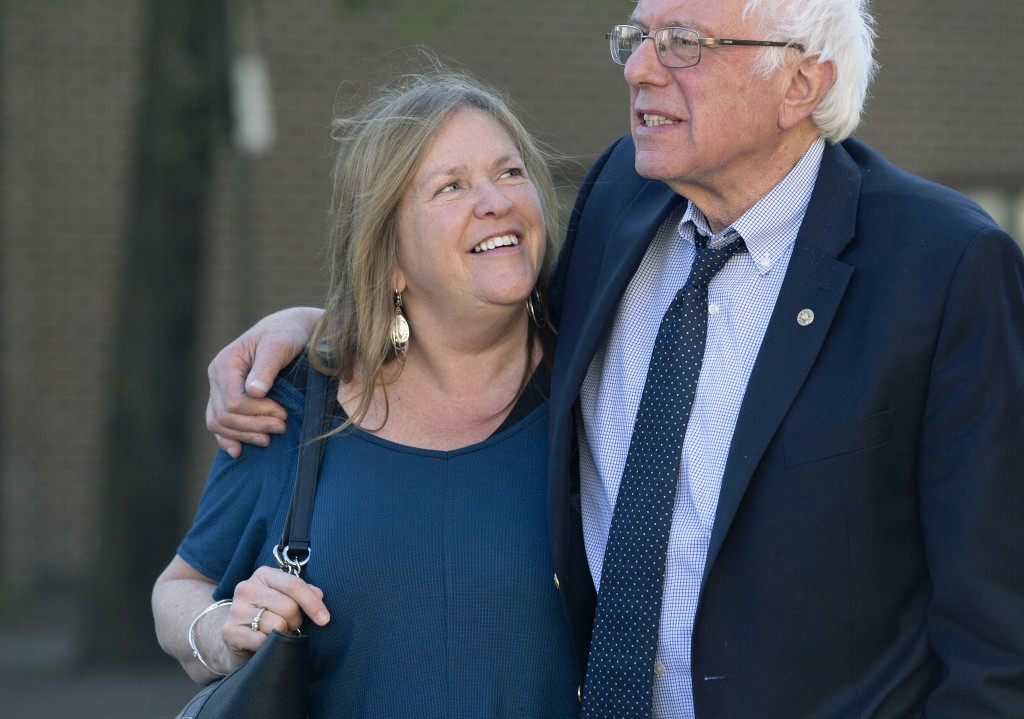 CONCORD, N.H. (AP) — The Sanders Institute, a think tank founded by the Democratic presidential contender's wife and stepson, is shutting down, at least for now, hoping to quash criticism that the nonprofit has blurred the lines between family, fundraising and campaigning.

The Vermont-based institute has stopped accepting donations and plans to suspend all operations by the end of May "so there could not even be an appearance of impropriety," Jane Sanders told The Associated Press.

The unexpected move by the institute's board of directors comes as Sanders, a leading candidate for the Democratic nomination, prepares for a wave of intense scrutiny into his political network and his family's role in its operation.

As a candidate in 2016, Sanders criticized Hillary Rodham Clinton over her family's nonprofit, saying the foundation run by Clinton's husband and daughter amounted to a backdoor for foreign leaders and others seeking to buy access and influence. The Sanders Institute could open the Vermont senator to charges of hypocrisy.

The institute was founded to promote liberal policies less than two years ago by Sanders' family with the backing of pro-Sanders celebrities and advocates— although Sanders himself had no formal role. While it operates at a fraction of the scale of the Clinton Foundation, it has accepted hundreds of thousands of dollars during its brief existence and has declined to disclose its donors.

Jane Sanders, who also serves as a chief adviser to her husband's presidential campaign, is not compensated for her role at the institute. Her son, David Driscoll, is a paid $100,000 a year as co-founder and executive director. Driscoll previously worked for a Vermont snowboarding firm and had no previous nonprofit experience, according to his LinkedIn profile.

The lack of transparency and the family ties has drawn criticism from good-government advocates.

"For a politician who runs on fairness and socialist principals, this looks like the old political games," said Lawrence R. Jacobs, director of the Center for the Study of Politics and Governance at the University of Minnesota's Humphrey School of Public Affairs. "It's a product of running a political operation in which family rules the roost."

Jane Sanders said the institute will not accept more money so long as her husband is a presidential candidate. Driscoll and the organization's two other employees would be laid off with no severance by the end of May, and its Burlington, Vermont, office would be closed, she said. Sanders said questions of nepotism have no merit because the senator himself played no role in the organization, which was led by an independent board of directors.

"I think that was the most important thing to do — to not accept donations, because nobody should think that they're giving money to an organization and that gains them access or favor to anybody else and anybody running for office," she said in an interview this week. She added: "It just seemed the responsible thing to do."

In her own founding role at the institute, Jane Sanders acted as the organization's curator, both on the web and in person. She was the star of the organization's December "Gathering" in Burlington, an assemblage of progressive speakers ranging from her husband to environmentalist Bill McKibben to actor Danny Glover.

Her continued involvement with the institute and her active role in her husband's campaign could have raised questions about the nonprofit's tax status under federal law. The institute was founded under Section 501c3 of the U.S. tax code, which prohibits it from substantial involvement in influencing legislation or participating "in any campaign activity for or against political candidates."

The institute's only available federal tax return showed it raised $459,000 in 2017. Jane Sanders told AP that the group has raised a total of about $700,000 since it began operations, much of it in "small donations from about 10,000 donors."

When she unveiled the think tank in June 2017, Jane Sanders said she and her husband had donated $25,000. The institute also received a $105,000 loan from the Sanders-affiliated political action nonprofit, Our Revolution, which was repaid last summer.

"We haven't disclosed names and contribution amounts because we've relied mainly on small donor contributions from thousands of people. The bulk of our donations come from donors that contribute less than $100," Driscoll said. "Some of our biggest contributors were organizations that came on to partner with us for the Sanders Institute Gathering, such as National Nurses United, Healthy Housing Foundation and Our Revolution."

Sanders' Senate campaign has stressed that both Our Revolution and the Sanders Institute have independent boards and are not directed either by his presidential campaign or his Senate office. But some figures have crossed easily between the groups. Institute fellow and Ohio State Sen. Nina Turner, recently resigned as president of Our Revolution to be co-chair of Sanders' presidential campaign. Turner could not be immediately reached for comment.

Some in the Sanders' orbit expressed disappointment at the shutdown, suggesting concerns about nonprofits and disclosure were unfair and unnecessary.

Actor and activist Danny Glover, a founding board member, defended the Sanders' family involvement but acknowledged that critics within the Democratic Party would question the legitimacy of the institute whether the criticism was fair or not.

"It's sometimes important to play it safe," Glover said in an interview. "This is a very dangerous moment."

One of the many fellows at the institute, the former public policy director for the California Nurses Association, Michael Lightly, said he was proud of the policy work the institute spearheaded. As a fellow he worked on an exhaustive report examining the cost of Sanders' Medicare for All plan that was later presented to members of Congress.

The report was one of several accomplishments highlighted by the institute, which also produced a six-video series about climate change, a video series on threats to voting rights and additional content on student loan forgiveness and federal budget priorities.

"From my point of view, we went very far in terms of policy development and promotion," Lighty said in an interview. "In this political environment, the optics sometimes come to the fore in ways I wish they didn't. ... The dissolution will be seen by good-government people as a good thing."