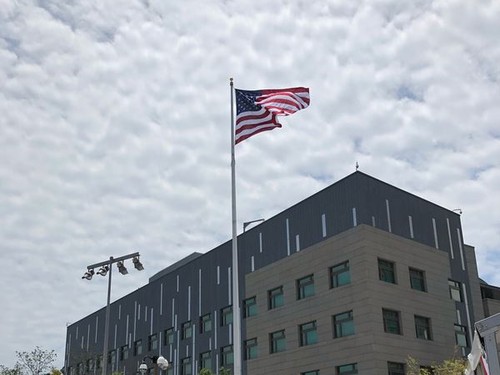 In a Facebook post, it said the United States continues to be concerned by the situation in Xinjiang.

U.S. Ambassador-at-Large for International Religious Freedom Sam Brownback said recently in Taipei that the U.S. continues to be concerned by the "horrific situation that's taking place in Xinjiang."

Brownback recognized Uighur human rights advocate Rushan Abbas for her courage during decades of activism in helping the Uighur people share with the world the truth about what the Chinese government is doing to them, according to the AIT Facebook post.

"We appreciate Taiwan's ongoing efforts in support of religious freedom," AIT said, including a link to the MOFA tweet on March 10.

The tweet states that no one should be persecuted, interned or brainwashed on the basis of race or religion.

Taiwan cares deeply about the suffering of Muslims in Xinjiang and will keep fighting to advance human rights and religious freedom, it said.

The Facebook post came after Brownback said at a religious freedom conference in Taipei March 11 that the U.S. has designated China as a "Country of Particular Concern" under the International Religious Freedom Act of 1998 for having engaged in or tolerated particularly severe violations of religious freedom.

China later issued a protest over Brownback's remarks in which he criticized Beijing's policies on religion.