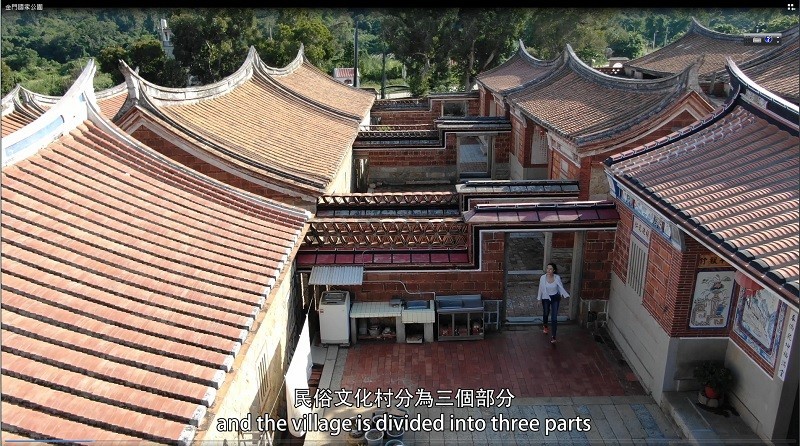 TAIPEI (Taiwan News) -- Shanhou in Taiwan's offshore island of Kinmen is made up of three small settlements—Shangbao, Zhongbao and Xiabao. Shangbao and Zhongbao are settlements of the Wang clan, and Xiabao is that of the Liang clan.

Zhongbao, where Shanhou Folk Culture Village is located, was built in the late Qing Dynasty by Wang Kuo-chen and his second generation family members after they became rich from running businesses in Japan.

The village is situated on the gentle slope of Wuhu Mountain, and all the houses face the sea, with the mountain guarding the back of the village.

The construction of these houses took 25 years to complete from the second year of the Qing Guangxu emperor (1876) to 26th year of the emperor's rule (1900). With deliberate work and delicate construction, the complex of these over-a-century old houses is Kinmen's most representative South Fujian style village.

Among the 18 buildings in the village, 16 are two-entrance residences, and the other two are made up of Hai Jhu Tang and the ancestral shrine of the Wang family. These buildings are collectively called the Shanhou 18.

Hai Jhu Tang was the private school founded by the Wang family. People of Kinmen have attached great importance to education, and therefore buildings such as Hai Jhu Tang can be seen in many settlements in Kinmen.

The ancestral shrine of the Wang family is located behind Hai Jhu Tang. The decorations of the shrine are exquisite and the carvings are delicate.

From the perspective of science, the Zhongbao settlement is blessed land that is going to last for a long time because it was built on a solid granite rock bed.

The Zhongbao settlement in Shanhou was built under a master plan, so all the buildings were laid out symmetrically.

With swallow-tailed eaves pointing to the sky above the numerous alleys that crisscross the settlement, Zhongbao is unique and magnificent.

Pay a visit to Zhongbao, and you will learn the structure of the typical traditional Kinmen architecture as well as the touching stories of Kinmen people going overseas and working hard to pursue their dreams.