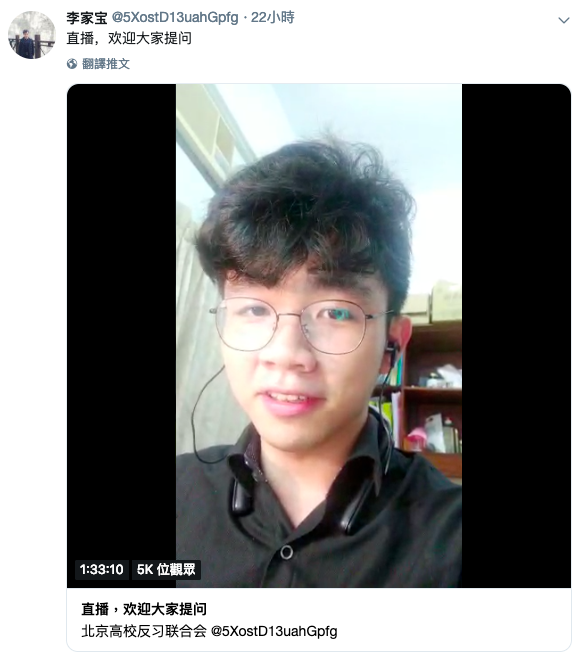 TAIPEI (Taiwan News) — Following in the footsteps of another student vlogger who hit headlines earlier this year for his criticism of the Communist Party, a Chinese exchange student in Taiwan has posted a video condemning his country’s political system.

Li said times in China now are darker than the period prior to the Xinhai Revolution (in which the old, imperialist system was overthrown). He expressed hope China can one day achieve freedom and democracy like Taiwan.

The student said he is completing a degree at a university in China’s Shandong Province, but is on an exchange at Chia Nan University of Pharmacy and Science in Tainan (台南).

Over a million Falun Gong practitioners have been persecuted by authorities, he said, not to mention the lawyers that have had their names sullied or been tortured by authorities to retrieve information in the 709 crackdown.

The crackdown involved the arrest and subsequent charge of over 200 rights activists and lawyers in 2015, accused of state subversion for their work defending human rights.

Even the martyrs sacrificed in the Tian’anmen Square massacre, they were all seeking freedom, continued Li.

The student also pointed out that Chinese citizens are relentlessly subject to danger and scandal at the hands of the state, mentioning the 2008 tainted milk powder incident which killed and hospitalized a number of children, the recent fake vaccine issue, and the one million plus “low end” citizens being purged out of Beijing into unemployment as part of “city clean-up” operations.

All Chinese citizens have at some point had to plead with authorities just to exist, said Li, and in China, freedom is a luxury to even the few dignitaries of society.

Although he admitted he is still in fear of the CPP’s political stability, Li said it “has reached its limit” and that he is ready to stand up.

Li said he hopes in the future, China is not simply a place “where one person lays down the law,” and that people can openly express their thoughts or criticisms of the government without then being disappeared.

Few Chinese nationals outside of the country air grievances with the Communist Party for fear of reprisal. Those who do are not only subject to punishment themselves, but often have family members persecuted as a result.

The mother of a Chinese vlogger living in the U.S. who made comments in support of Taiwan’s freedom and democracy was detained by local authorities in March.