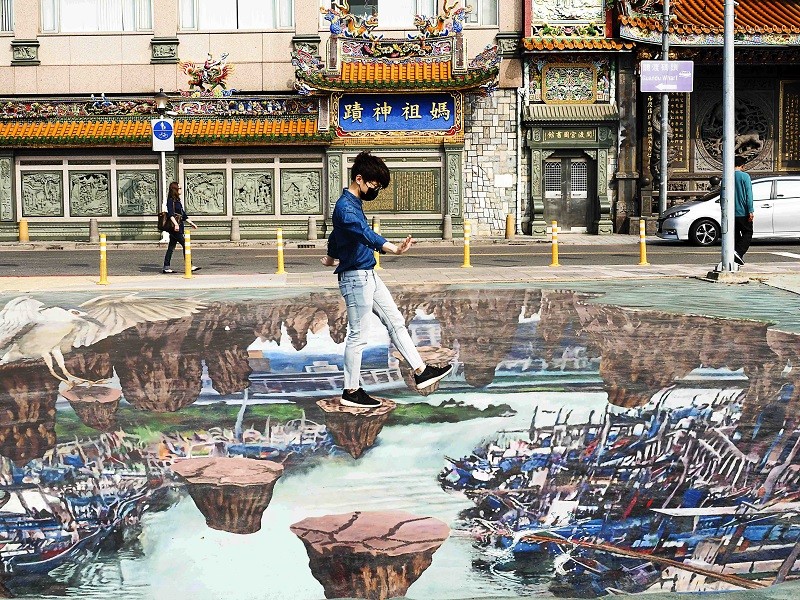 The HEO said that in the past there were steps on the edges of the square in front of Guandu Temple, and the difference in height had resulted in fall accidents when big events were held there, causing injuries. During a recent quality improvement project, the HEO leveled out the whole square and replaced its old, worn pavement with new one emphasizing aesthetics, including two 3D paintings, which the office said will become a photo hot spot in the area.

The HEO added that visitors can also go up to the scenic lookout in front of the Guanyin Bodhisattva hall to watch the dragon and phoenix painting in the square glimmering at dusk.

According to an old official document, Guandu Temple, built in 1712, is the oldest Mazu temple in northern Taiwan. Now the temple is not only a popular place for people to worship Mazu, but it also a popular place for cyclists, who like to start their riverside cycling trips from the temple or make a stopover here to take a break and enjoy the nice views.

The riverside park in front of the temple, located at the confluence of the Keelung River and Tamsui River, is an important resting place for migratory birds. The park is a nice place to take a walk.

The nearby Guandu Wharf is also a nice place to visit, especially when the sun is setting and the water of the Tamsui River is sparkling with golden rays of sunset. Here, visitors can also get a nice night view of the Guandu Bridge.

The address of the temple is: No. 360, Zhixing Road (知行路), Beitou District, Taipei City. Visitors coming by the Taipei MRT red line should get off at MRT Guandu Station, exit the station from Exit 1, then take a right, and walk along Lane 296 and then Lane 301 of Dadu Road (Section 3) to the temple. The walk takes about 10 minutes. The following photos are courtesy of the HEO.