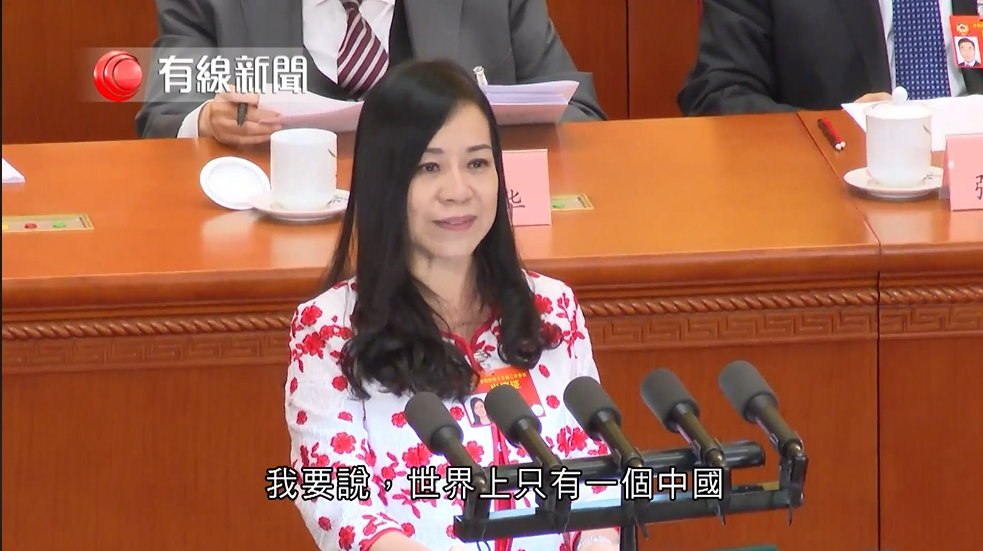 TAIPEI (Taiwan News) -- During a plenary meeting of the 2nd session of the 13th CPPCC National Committee, a Taiwanese-born Communist cadre gave a shrill speech calling for adherence to the "one China" principle and expressed her giddy excitement about the "reunification" of the two sides of the Taiwan Strait, leaving many Taiwanese netizens nauseous.

Video surfaced on Monday (March 11) showing Ling Yu-shih (凌友詩), member of the Chinese People's Political Consultative Conference and an honorary researcher at the Research Centre for Contemporary Chinese Culture of The Chinese University of Hong Kong, giving an excessively theatrical speech in which she praised the "one China" principle, the "one country, two systems" framework, and expressed her eagerness for Taiwan's "reunification" with China. Her speech won 13 rounds of applause from the puppet parliament, but Hong Kong and Taiwan netizens found her stilted voice grating and hard on the ears.

Ling was born in Kaohsiung, Taiwan, but moved to Hong Kong to study at the age of 17. She holds a doctorate in philosophy from the University of Hong Kong.

On Monday, the Facebook page Cable China Desk posted the video of the speech on its timeline. In the speech, Ling called for "adhering to the 'one-China' principle, enriching the practice of peaceful 'reunification,' and eagerly anticipating the 'reunification' of the two sides of the Taiwan Strait."

She described herself as an "ordinary Taiwanese person and an outside visitor from Hong Kong." Ling said that thanks to the continuous prosperity, progress, and compatibility of the country, the practice of "one country, two systems" and the grand event of "cross-strait reunification" can occur, if "Taiwan would only jump out of its narrow pattern."

"Today, I stand at the speaker's podium in the Great Hall of the People. I would like to say that there is only one China in the world, and the only legitimate representative government of China is the Government of the Peoples' Republic of China. I am proud to participate in the country's legal system as a dignified Chinese person!"

In addition, Ling stated, "I believe that in the near future, the central government will be able to make the legal status of Taiwanese residents as 'Chinese citizens' clearer, just as mothers recognize their own children, so that they can abandon their intolerance and be as honest as I am."

Ling thanked the Chinese Communist Party for helping the country stand up from devastation and become strong and rich. "I deeply believe that the Chinese nation is too tough and Chinese culture is too great. I firmly believe that the Chinese nation will revive and the motherland will be 'reunited.' I would like to devote all my efforts to the prosperity of the motherland and the arrival of the day of 'reunification' of the two sides."

"It is highly recommended that all Taiwanese come to see how they are 'represented' among the 1.3 billion people in China."

"Remember to turn on the accent!"

"Your accent will change too."

"Does she represent Hong Kong or Taiwan?"

"Where did the Republic of China go?"

The term "reunification" is a misnomer because Taiwan was never a part of the People's Republic of China.

Video of her speech can be seen below: