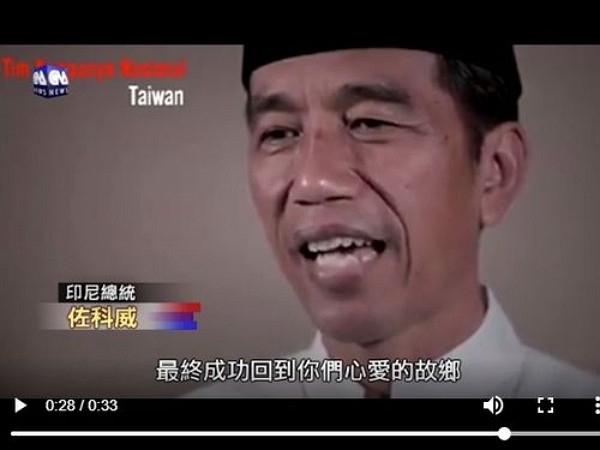 Indonesian President Joko "Jokowi" Widodo, who is seeking re-election in April, has recently unveiled a video that addresses his fellow countrymen working in Taiwan and wishes them well.

Usman Kansong, Widodo's campaign team director, told CNA Tuesday that the short video clip was recorded to extend Widodo's greetings to the hundreds of thousands of Indonesians currently living and working in Taiwan.

According to Taiwan's Ministry of Labor (MOL) statistics, there were 269,000 migrant workers from Indonesia as of the end of January 2019.

In the video, the Indonesian president also extended his encouragement to his fellow Indonesians in Taiwan, telling them to stay united and work hard.

A World Bank report in 2017 indicated that over 9 million Indonesians were working overseas in 2016, which represented almost 7 percent of the country's labor force.

While there is also another similar video addressing Indonesian expatriates in the United States, the Taiwan clip was the only one recorded by the president targeting Indonesian migrant workers overseas, Kansong said.

The Indonesian general election is scheduled to be held in April.