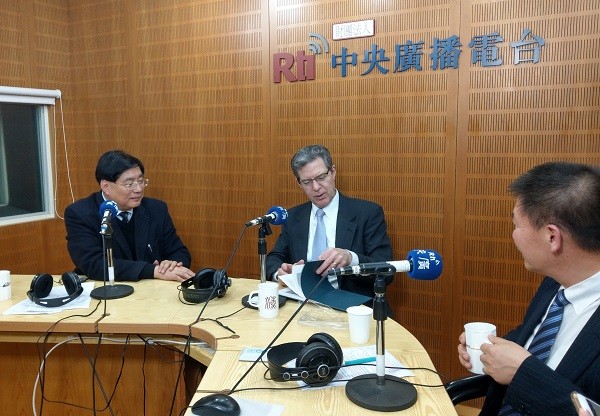 During the interview at RTI, Ambassador Brownback boldly expressed his hope that religious freedom will come to China soon, and also declared the support of the United States for those suffering from persecution under authoritarian regimes like the one in Beijing.

Brownback also met with President Tsai and held a press conference at the American Institute in Taiwan (AIT) on Monday, where he expressed his admiration for Taiwan as an exemplar of religious freedom in Asia.

In the RTI Interview, Brownback cited Taiwan's excellent track record when it comes to religious freedom and diversity. Taiwan's religious freedom really shows the “strength of a nation, when that much diversity (is present) and people care working together,” said Brownback.

“The arc of history trends towards freedom,” the Ambassador declared in the 30 minute interview at RTI. Sharing a message of hope and partnership with allies and oppressed peoples throughout the region, Brownback pledged that the U.S. will continue supporting oppressed peoples in their fight for religious freedom throughout the Indo-Pacific and the world.

When asked about what message he had for the Communist leaders in China, Brownback said that he would be eager to meet with CCP leaders in Beijing if he had the opportunity, and to deliver a message.

He said that he would tell that now is a "fork in the road" and the time has come for them to choose either the path of freedom, or a path of continued oppression. China ultimately can only benefit from increased liberty and acceptance of religious diversity, said the ambassador.

The full RTI interview can be see below.