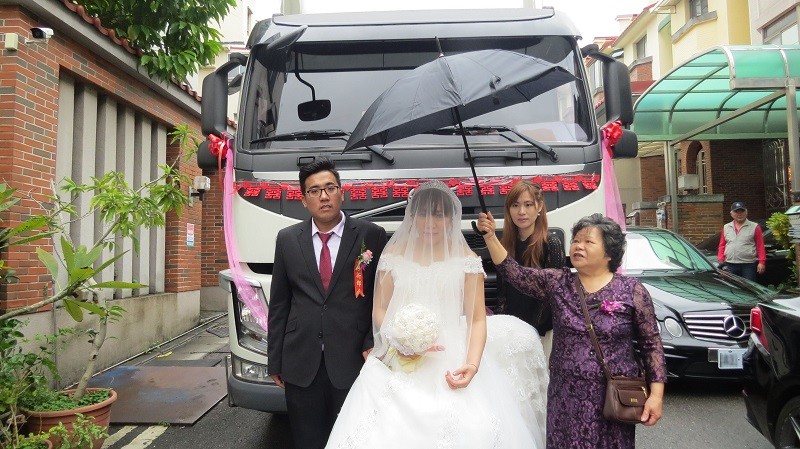 TAIPEI (Taiwan News) – A bridegroom arranged a special convoy of six truck tractors to escort his bride from her home to their wedding in a small town in Central Taiwan’s Miaoli County on Sunday, prompting the bride to say, “[I] will never forget this all my life,” Central News Agency (CNA) reported on the same day.

The six truck tractors were decorated with red festoons, heart-shaped wreaths, and pink ribbons. The convoy set out from Sanwan Township in Miaoli County to escort the bride from Miaoli City back for the wedding in Sanwan, attracting much attention from passersby along the way, CNA reported. Many of the bride’s family and friends were impressed by the sight and took photos with the special lineup.

The bridegroom, Lee Guan-ru (李冠儒), a truck driver, said he met his bride, Liang Yun-qing (梁韻晴), during an online shopping transaction several years ago, according to CNA. Lee was buying shoes from a seller over the Internet, and Liang, who was in the online shopping business, was delivering the shoes to Lee when they laid eyes on each other for the first time. For Lee, it was love at the first sight. However, Liang had no feeling for the customer, the news outlet reported.

Besides pursuing Liang, Lee also exhibited his respect for Liang’s father, who was a retired drillmaster of Feng Chia University, CNA reported. After dating his daughter for quite a while and when getting married with his daughter was an appropriate topic to discuss, the truck driver put a wreath in front of the community in which the Liang family lived, with words asking Drillmaster Liang to agree to let his daughter marry him as well as asking his girlfriend to marry him, according to the news outlet.

Lee said that as a truck driver, he drove his girlfriend in the truck a lot during work and to many places for fun.

The convoy to escort the bride to the wedding was sponsored by the bridegroom’s boss, who mobilized the six truck tractors for the mission, wishing to give the bride a "different" wedding experience, CNA reported. It’s said that each vehicle has a price tag of more than NT$ 4 million.

The bride said that she felt “very nervous, but very special” when she saw the escorting lineup, adding that she would never forget the moment.