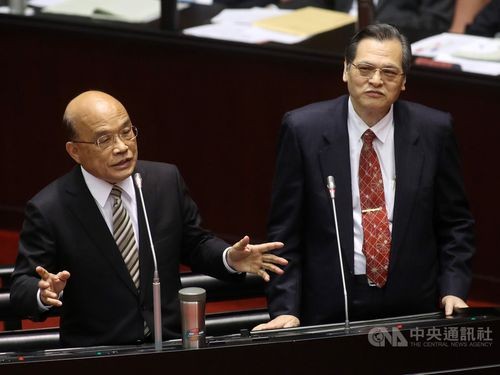 Premier Su Tseng-chang (蘇貞昌) said Tuesday that he is in favor of imposing tighter screening for officials from China who apply to visit Taiwan.

In addition, Chinese officials going beyond the stated reason for their visits, such as those caught engaging in pro-Beijing propaganda that infringes upon Taiwan's interests, "will not be allowed into the country again," Su said at a legislative hearing in Taipei.

Su made the remarks after New Power Party (NPP) Legislator Freddy Lim (林昶佐) criticized the government for not introducing policies that would tighten the screening of applications by Chinese officials to visit Taiwan, as it promised last year.

In response, Mainland Affairs Council (MAC) chief Chen Ming-tong (陳明通) said that since he took office, he has already rejected many applications by officials from Shanghai who wished to visit the country.

The only exception was last year, when he allowed Shanghai Municipal Taiwan Affairs Office Director Li Wenhui (李文輝) to come to Taipei last December to discuss the agenda for the Taipei-Shanghai twin-city forum with his Taipei counterparts, Chen said.

Li, however, was not allowed to visit cities other than Taipei, Chen noted.

Su said the government will look into imposing stricter policies and rules to show that Taiwan is capable of stopping Chinese officials from doing whatever they want during their visits.