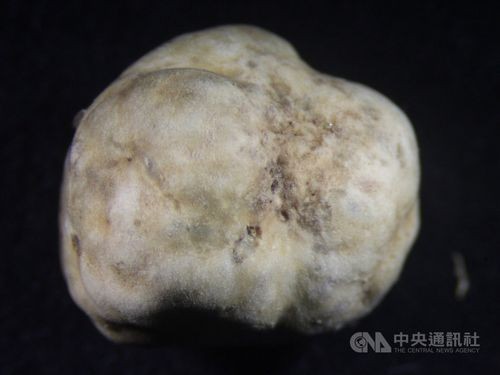 According to Fu Chun-hsu (傅春旭), an associate research fellow at the institute, it will take two years to complete the study on the artificial production techniques for the truffles.

The study will be conducted in both the laboratory and the field, Fu said, adding that hopefully, commercial production of the highly sought-after commodity can be launched in 10 years.

Commenting on how the new species was found, Fu said it began with a campaign by some enthusiastic students to discover Taiwan's native white truffles.

Tuber elevatireticulatum was found in Xitou in central Taiwan in 2017, the institute said.

According to Fu's students, they have found five new truffle species since 2014, including Hydnotrya formosanum and Tuber piceanum.

To gain publicity for the native species, the TFRI will also submit the discovery to Mycotaxon, a journal promoting publication of discoveries in fungal biodiversity, and to Mycoscience, an official English-language journal of the Mycological Society of Japan.