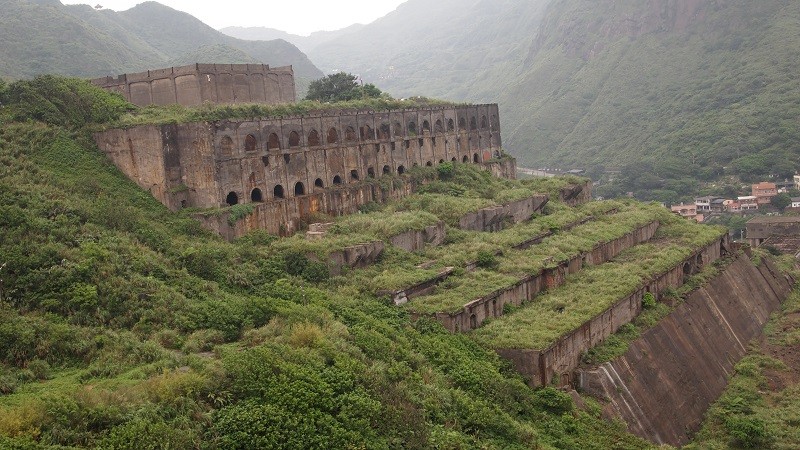 TAIPEI (Taiwan News) – New Taipei Mayor Hou You-yi (侯友宜) is mulling over the idea of projection mapping on the abandoned Remains of the Thirteen Levels (十三層遺址), which sits precariously on a mountain face that overlooks the ocean, on the northeastern coast of Taiwan, New Taipei Tourism and Travel Department said in a news release on Sunday.

Three long giant exhaust pipes can be seen meandering up the hill like three dragons to the back of the hill, where no people lived, to release toxic gases produced by the refinery in the old days.

Jinguashi and Jiufen were thriving mining towns during Japan’s rule of Taiwan. After Japan’s defeat in World War II, a Taiwanese state-run company took over the refinery. However, around 1973, the gold and copper minerals in the area eventually ran out, and the company went out of business.

The sea immediately below the archaic smelter is called the Yin Yang Sea (陰陽海), famous for its distinctly yellowish looking seawater all year round. It’s said that the color is a reflection of the mineral deposit at the bottom of the sea that accumulated from the sewage of local refineries during the mining era.

Hou was selling the idea of illuminating the potential World Heritage site at night to Transportation Minister Lin Chia-lung (林佳龍) when they were inspecting the site together on Sunday.

Hou said he was planning to use the spectacular landmark to give a boost to the local tourism industry without changing local landscapes. Projection mapping on the Remains of the Thirteen Levels at nighttime would create a new feel for the historic metal refinery and attract both domestic and foreign visitors, making them linger at the charming place at night, the mayor said.

The minister expressed his support of the mayor’s suggestion, and recommended an illumination expert for the design of the project. 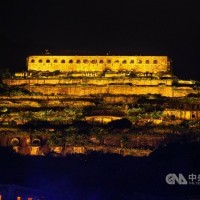