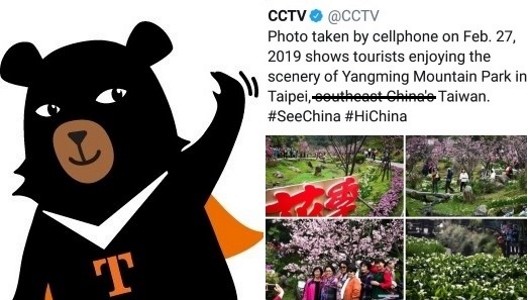 The next day, MOFA replied on Twitter by writing that "Taiwan's OhBear was dismayed by CCTV's factual error." It went on to explain that the Yangmingshan National Park is in "TAIWAN" in all caps, and is not "southeast China."

MOFA then asked that the mistake be corrected immediately.

MOFA added a comment below which stated that "Tweeting is fun" and that "people in China should be allowed to enjoy it too." MOFA also emphasized that there is "no need to fear wumao, as we don't have any in Taiwan."

The term "wumao" is used to describe China's legions of trolls recruited to spread disinformation on social media at the alleged price of five mao (0.5 Chinese yuan) per comment.