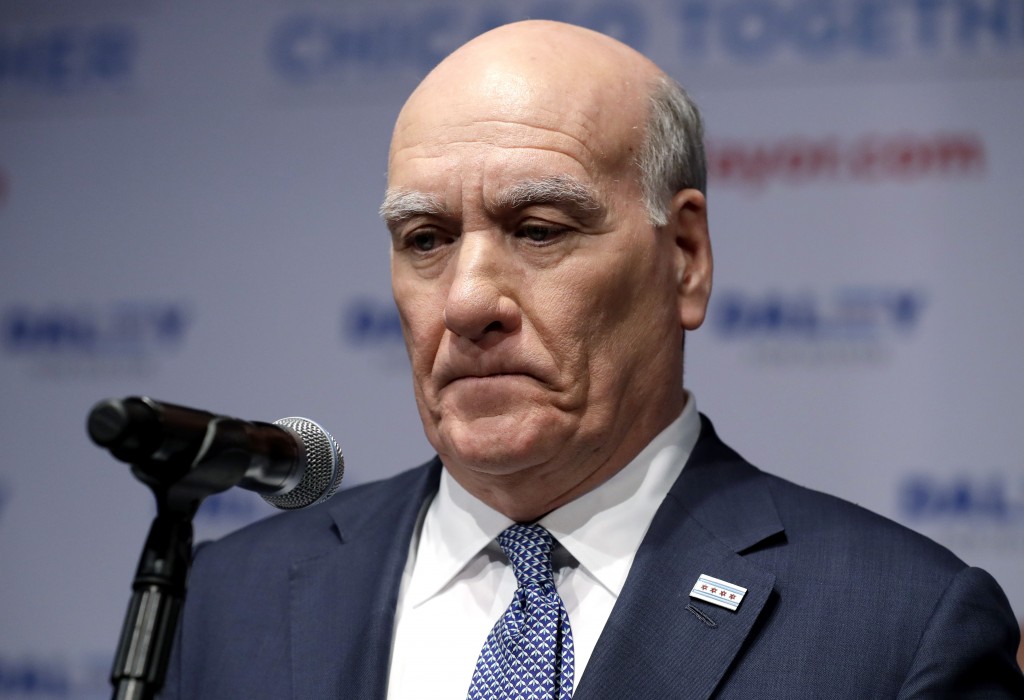 CHICAGO (AP) — A political outsider who campaigned on reforming Chicago's police department after a white officer's fatal shooting of a black teenager said Wednesday that voters likely had the high-profile case on their minds when they advanced her to an April runoff for mayor, assuring for the first time a black woman will lead the nation's third-largest city.

Former federal prosecutor Lori Lightfoot's first-place finish in Tuesday's opening round of voting was somewhat surprising considering the 14-candidate field featured prominent state and local leaders and a member of the Daley family that had dominated Chicago politics for more than half a century.

But former Commerce Secretary and White House chief of staff William Daley, whose father and brother both served two-decade stints as mayor, didn't even make it to the runoff to succeed Rahm Emanuel, who isn't seeking a third term.

Instead, Lightfoot's outsider candidacy will be matched up against the ultimate insider, Toni Preckwinkle — a longtime member of the City Council who now holds the top job in Cook County. They are both black women who campaigned as progressives, but that's largely where the similarities end.

Lightfoot rose to prominence after she was appointed to lead the Police Accountability Task Force in the wake of the death of Laquan McDonald. The black teenager was shot 16 times and killed by white police officer Jason Van Dyke, who was convicted and sentenced to about seven years in prison.

"To do honor to Laquan McDonald's short and tragic life we have to make significant changes in the way our police department, in particular, addresses communities of color," Lightfoot told The Associated Press.

Black women have had successful mayoral races in smaller cities, too. Karen Weaver was elected Flint, Michigan's mayor as the city reeled from a lead-tainted water crisis while under state control. The issue galvanized black voters behind a reform candidacy much in the same way the McDonald shooting helped promote Lightfoot's campaign.

"We lift each other up and share a common bond," Weaver said of fellow black female mayors.

But Marcus Pohlmann, a political science professor at Rhodes College in Memphis, Tennessee, says the fact two black women finished on top in a crowded race doesn't necessarily mean the racially divided city has suddenly undergone a "progressive breakthrough." Combined, the two candidates barely topped a third of the vote — 17.5 percent for Lightfoot and 16 percent for Preckwinkle. A third black candidate, Willie Wilson, finished fourth in the race with 10 percent.

"I call it a historic opportunity," Pohlmann said. "Once the city recognizes that a black woman can do the job it does break some ice, it does break that glass ceiling and opens the door for more women to seriously be considered."

Blacks make up about a third of Chicago's population. The city has only elected one black mayor, Harold Washington Jr., who was elected in 1983 and died months into his second term. Washington's predecessor, Jane Byrne, is the only woman to serve in the job.

"Organizers campaigned around issues of education, racial economic equity, police accountability, and really young black women have largely been at the forefront of those community organizing efforts," said Elizabeth Todd-Breland, assistant professor of history at the University of Illinois-Chicago.

The growing black sorority of city leadership is part of the momentum around black women as candidates and voters across the country, as a key constituency in the Democratic Party. Black women are again expected to impact the 2020 election, with a diverse field of candidates that includes California Democratic Sen. Kamala Harris, who could become the first woman female president and second African-American.

Preckwinkle now leads one of the largest counties in the country but started her career spending a decade as a high school history teacher. She then was elected a Chicago alderman and did economic development work during the 1980s when Washington served as mayor.

Preckwinkle fared well, in part, in predominantly black areas on the city's South Side. Lightfoot, who is openly gay, got much of her support from wealthier, predominantly white areas along the northern shores of Lake Michigan.

Todd-Breland said having two black women in the runoff to become mayor of a city known for its segregated neighborhoods is historically significant, "given both the city's history of racism and marginalization of African-Americans."

Both women are becoming role models for expanding other women's perspectives and opportunities, Pohlmann said.

"I look at it more as breaking down stereotypes than necessarily assume that a woman is going to do something differently," he said.