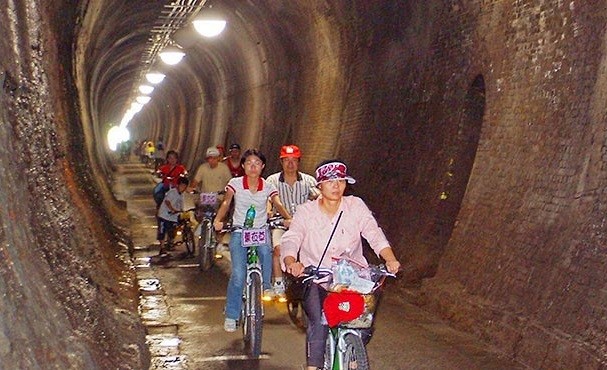 TAIPEI (Taiwan News) – Hou-Feng Bikeway (后豐鐵馬道) is listed by Taichung’s Tourism and Travel Bureau as one of the top three most widely favored bikeways in Taichung City, and it is easy to see why.

Hou-Feng Bikeway was open to the public in April 2005. The bikeway starts under the elevated bridge of National Highway 4 in Fengyuan District and ends at the Houli Horse Ranch.

The bikeway was built along a stretch of an old TRA mountain line railroad. The 4.5km bikeway offers views of the verdant countryside as well as the unique experience of riding over a truss bridge, the Hualiang Steel Bridge, and through a 1.2 km former railway tunnel, Tunnel No. 9.

The Hualiang Steel Bridge, an attraction near the southern end point of TRA’s former mountain line, spans 382 meters over the Dajia River. The bridge was completed in 1908 during the Japanese rule, featuring a patterned truss superstructure.

The highlight of the bikeway is the century-old Tunnel No. 9. The 1.2 km tunnel, also constructed in 1908, was the longest tunnel along the former mountain railway line. * Note: This video contains attractions of both Dongfeng Bicycle Green Way and Houg-Feng Bikeway (The video is taken from Taichung Travel Net, courtesy of Taichung’s Tourism and Travel Bureau))