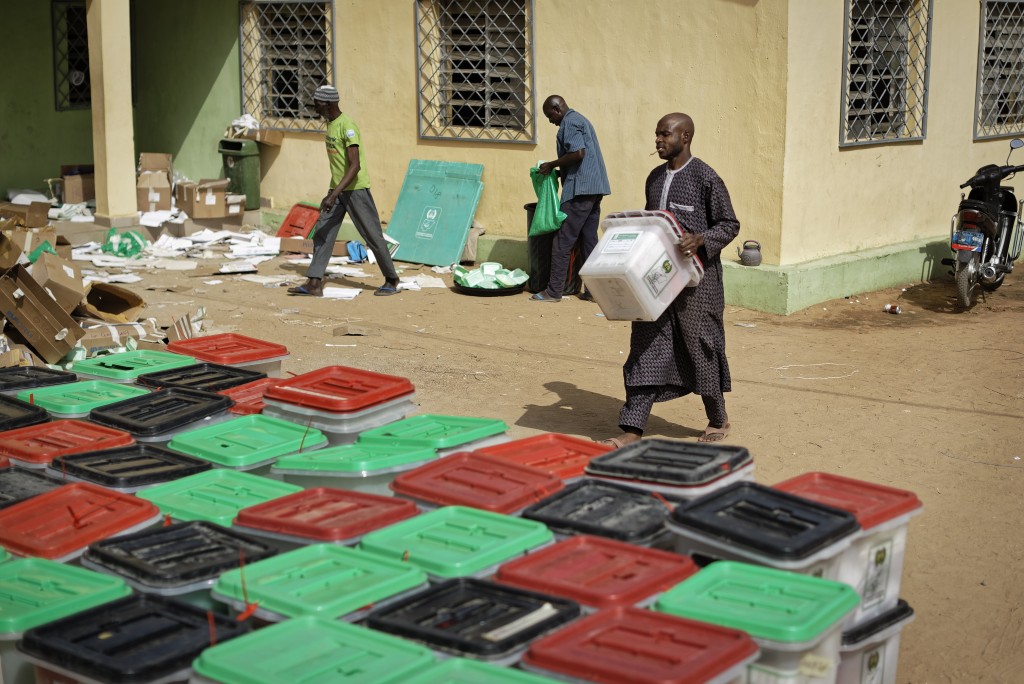 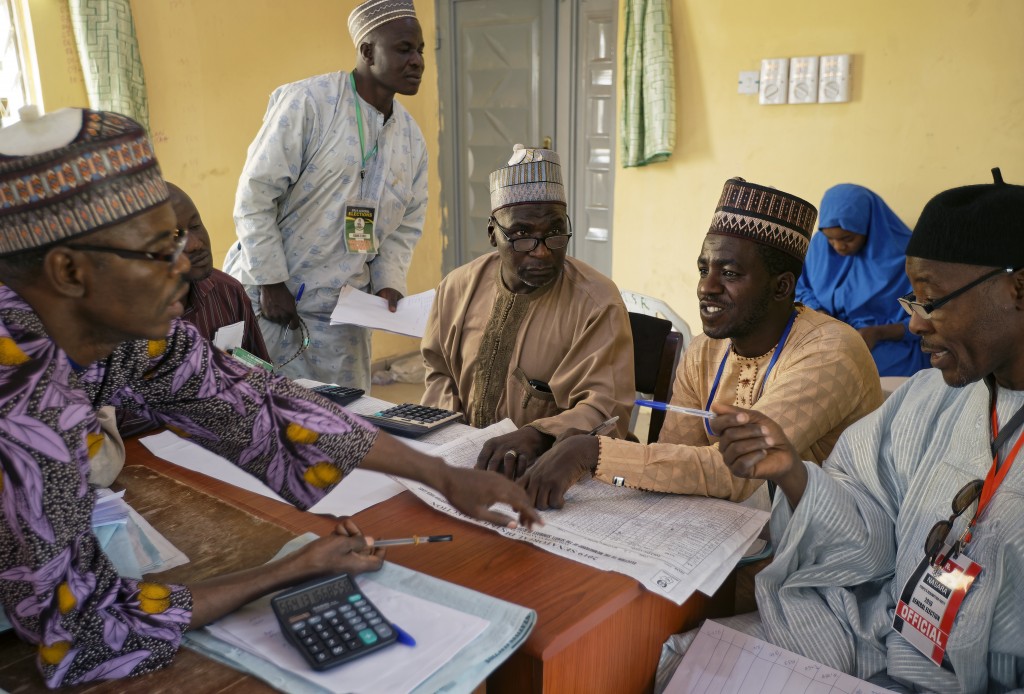 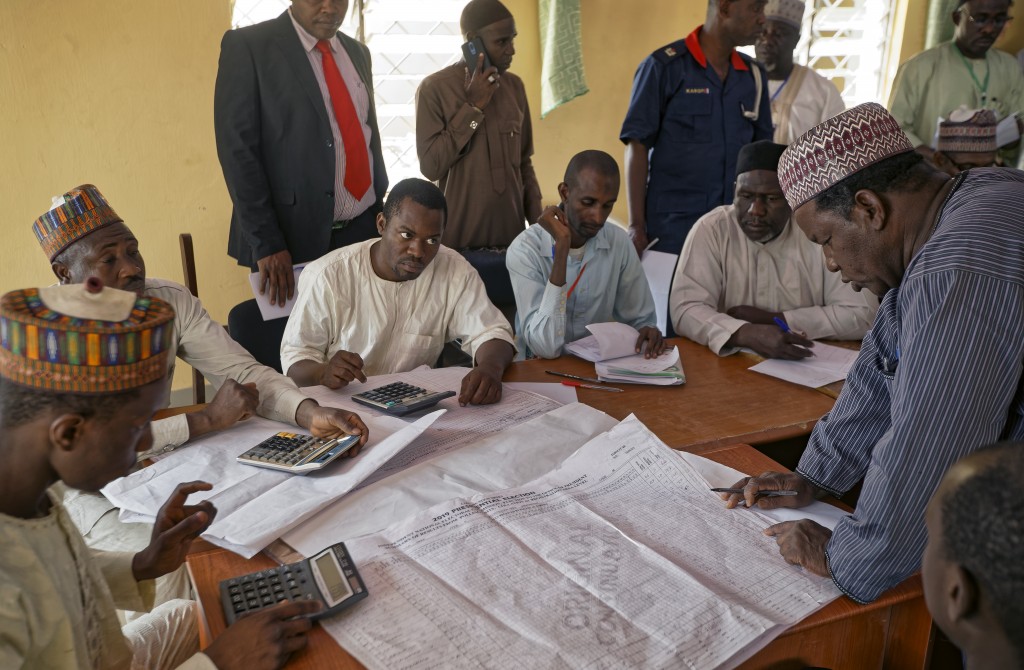 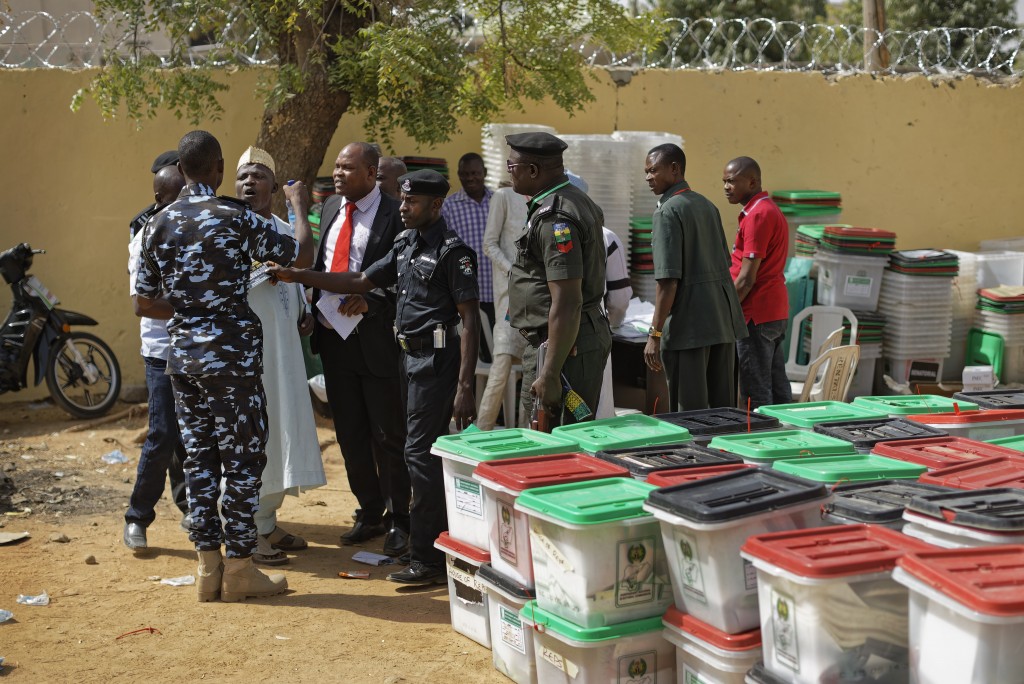 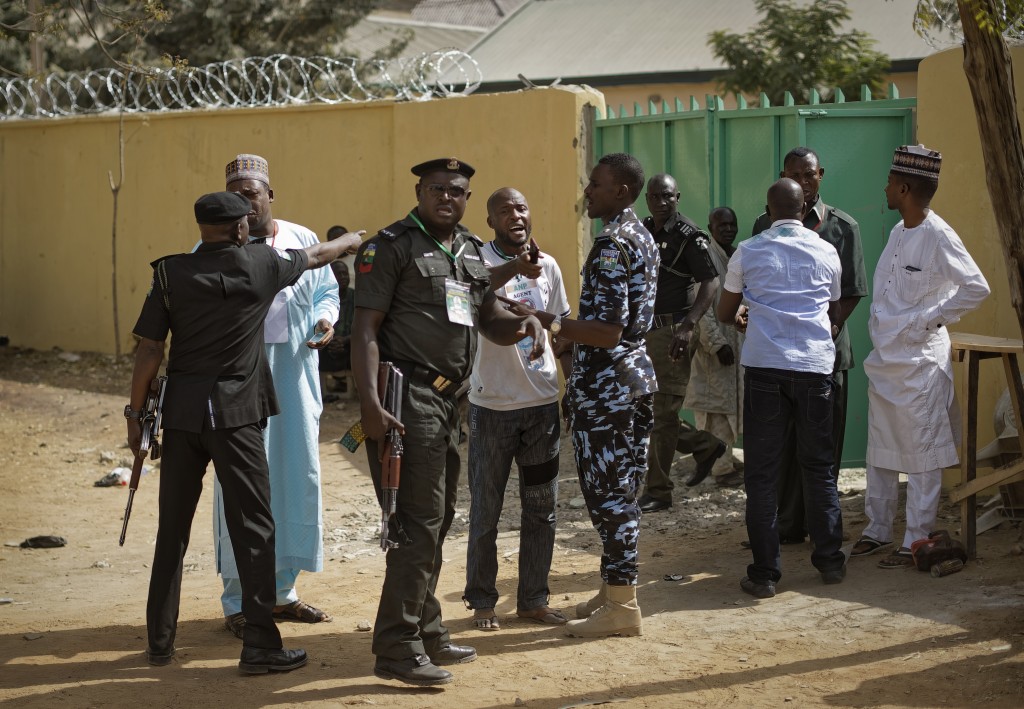 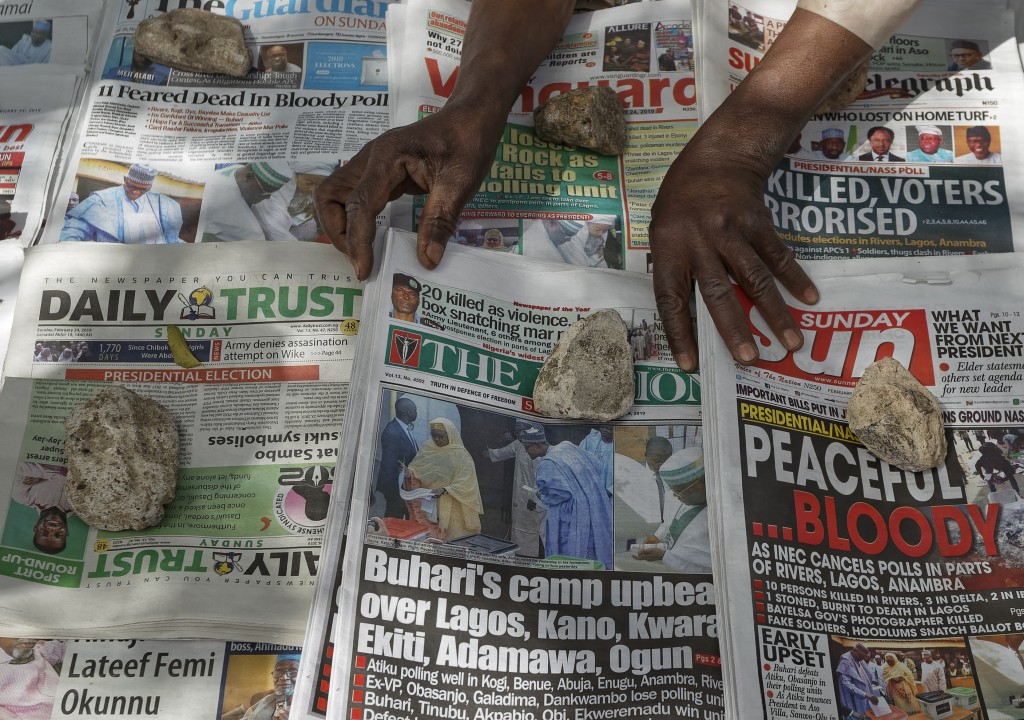 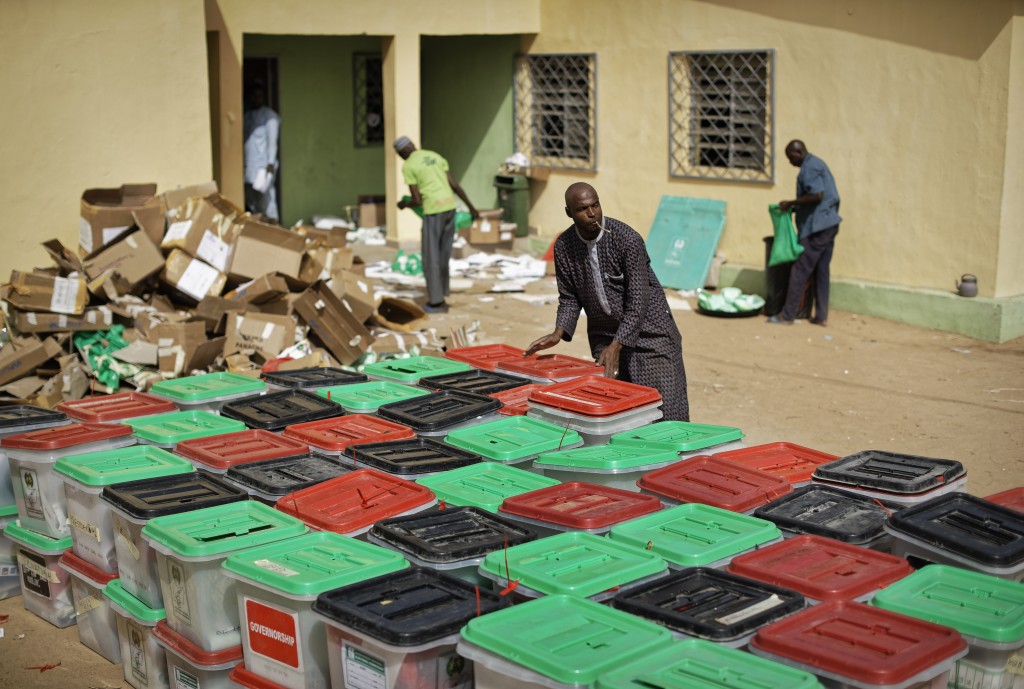 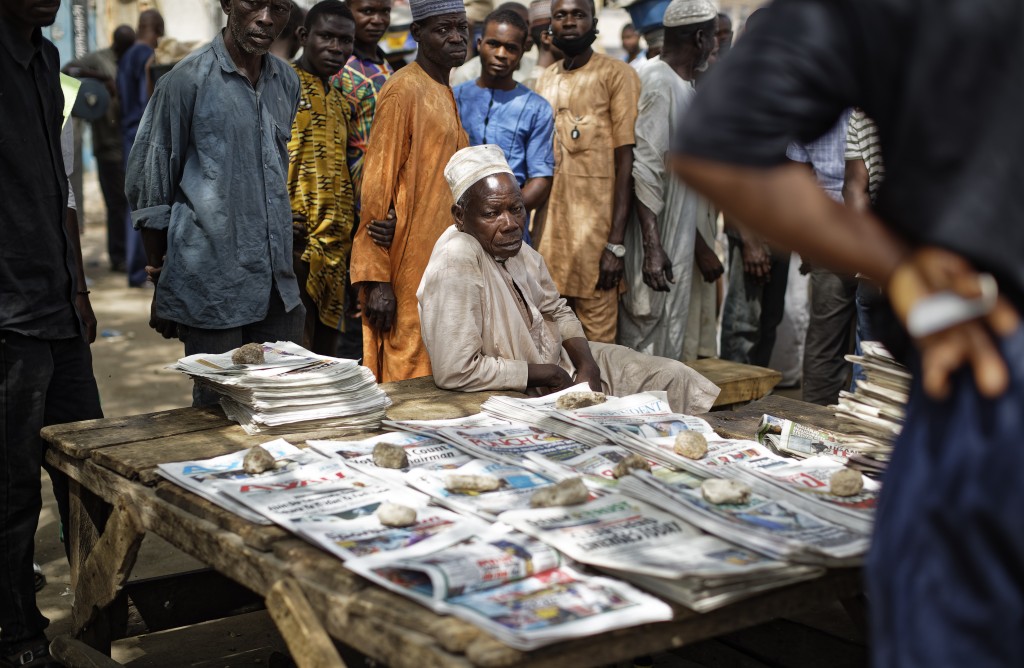 A spokesman for Nigeria's electoral commission says voting is still taking place Sunday "in several places" across the country.

Oluwole Osaze-Uzzi, the commission's director for publicity, gave no details about specific states where polls are still open. But some of the states affected by delays reportedly include Plateau, Nasarawa and Jigawa.

The head of the electoral commission is expected to address the nation later Sunday as Nigerians await the results of Saturday's presidential election.

The election has been marred by sporadic violence and delays at some polling stations that faced problems ranging from missing stamps to malfunctioning card readers.

More than 72 million people were eligible to vote.

Vote counting continued Sunday as Nigerians awaited the outcome of a presidential poll seen as a tight race between the president and a former vice president.

Although voting was peaceful in most areas of Nigeria Saturday, there were a few outbreaks of violence in the vast West African country and many reports of delays at polling stations.

Many polling stations remained open after dark to allow people waiting in line to vote. Turnout appeared light following the last-minute postponement of the election for a week. More than 72 million people were eligible to vote.

There were media reports Sunday of voting still taking place in some remote areas that experienced problems Saturday.

President Muhammadu Buhari, a former military ruler who won election in 2015, is seeking his second term against more than 70 candidates. His main rival is Atiku Abubakar, a former vice president and billionaire businessman.

Many Nigerians, appalled that their country recently became the world leader in the number of people living in extreme poverty, said the election will be decided by economic issues. Nigeria suffered a rare, months-long recession under Buhari when global oil prices crashed, with unemployment growing significantly to 23 percent and inflation in the double digits.

Abubakar's party is alleging "deliberate" voter suppression in areas where Buhari's party is known to be unpopular.

One of the largest domestic observer groups, Watching the Vote, told reporters on Sunday that Nigeria had missed its chance to improve on the 2015 election. Logistical problems caused 59 percent of the polling stations it monitored to open late, and misconduct at some stations hurt people's ability to vote. The issues, however, didn't necessarily undermine the election's credibility, spokesman Hussaini Abdu said.

In the northern city of Kano tempers flared at one collation center where unaccredited Abubakar supporters alleged that ballots from a couple of polling units hadn't been counted. Amid shouting, security personnel pushed them out of the courtyard's metal door.

A ruling party supervisor, Joy Bako, watched in exasperation before they engaged her in a heated argument.

"It was free and fair," she said. "Nobody was arguing. I'm surprised at all this noise."

Observers and workers at the collation center, and others who had visited multiple centers, reported a peaceful process in an area where voters were expected to largely support Buhari.

Even an opposition supporter, Abubakar Ali, paused from the ruckus to acknowledge that "everything was going clear." But a lot of people did not come out to vote as compared to the last time, he said.

Godwin Ugbala, who spent the election as an agent for one of the country's dozens of small political parties, reported a smooth voting day and added his voice to the frustration with Buhari.

"This one failed us in so many ways," Ugbala said. "No business. Everything is tired."

He voted for Buhari in 2015 but said the president had "betrayed" the people by not following up on his promises.

Nigeria's presidential election was held a week late, after the electoral commission said it needed more time to organize the logistics of holding a credible election

Observers said the postponement, blamed on logistical challenges, could favor Buhari, with some Nigerians saying they didn't have the resources to travel a second time to their place of registration.

It's unclear when a winner will be announced, but some observers say it could be Tuesday or Wednesday.