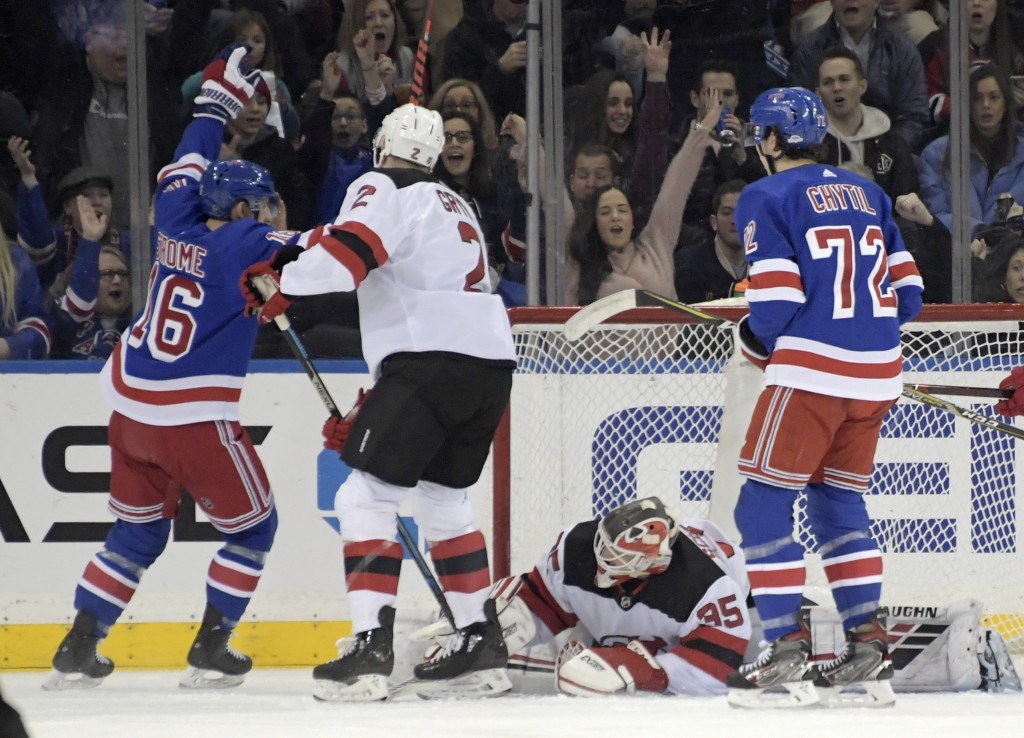 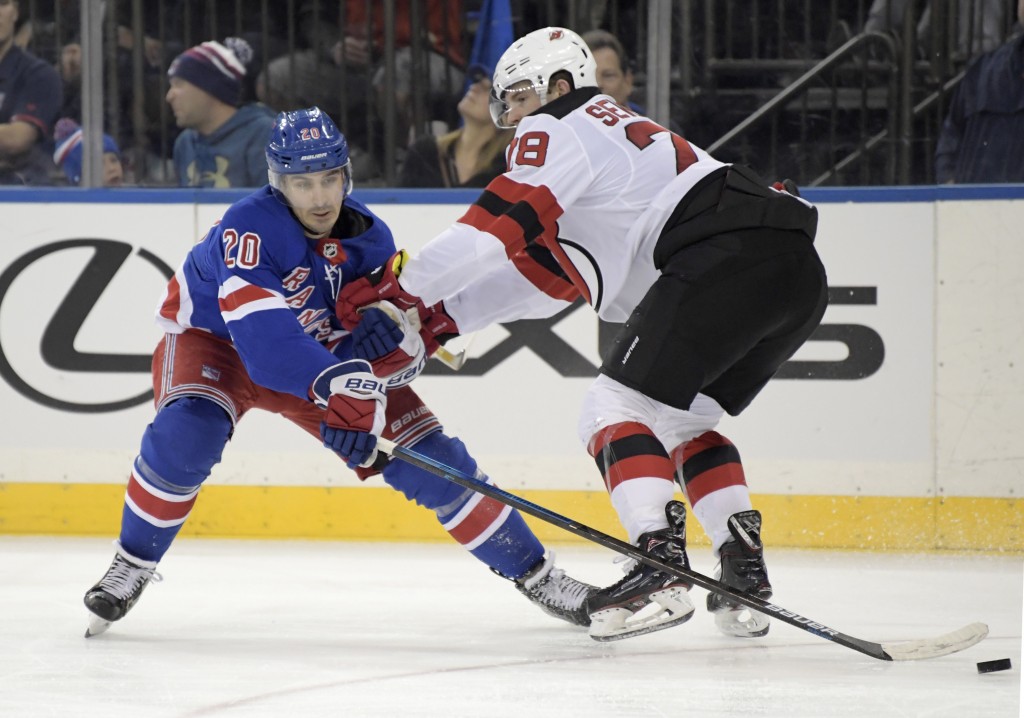 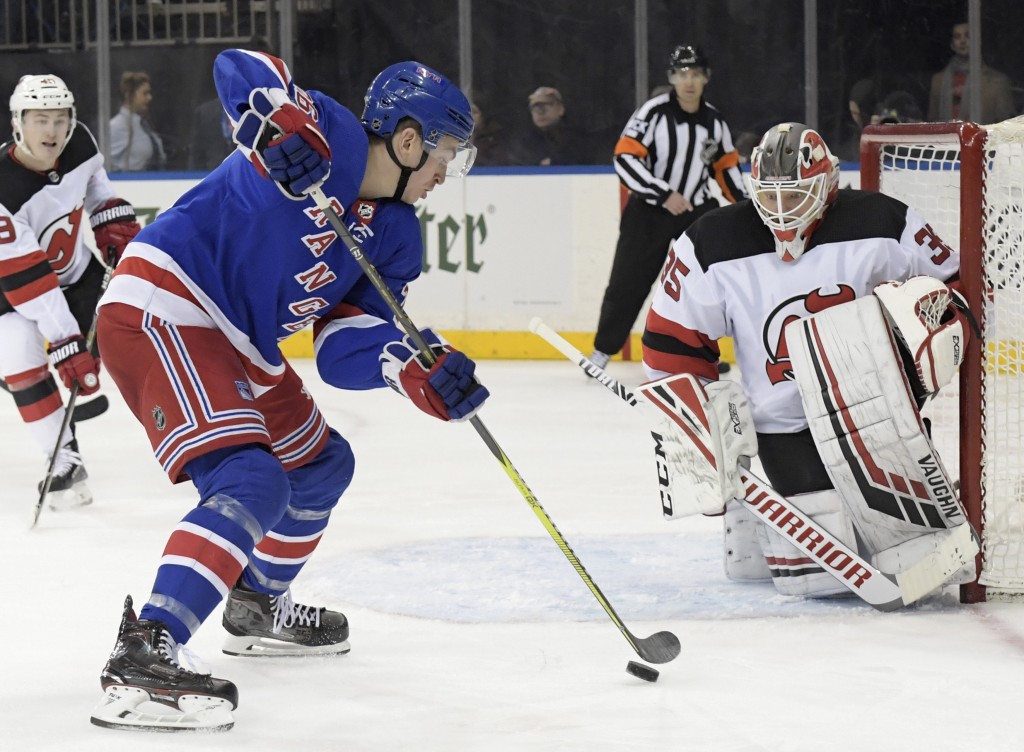 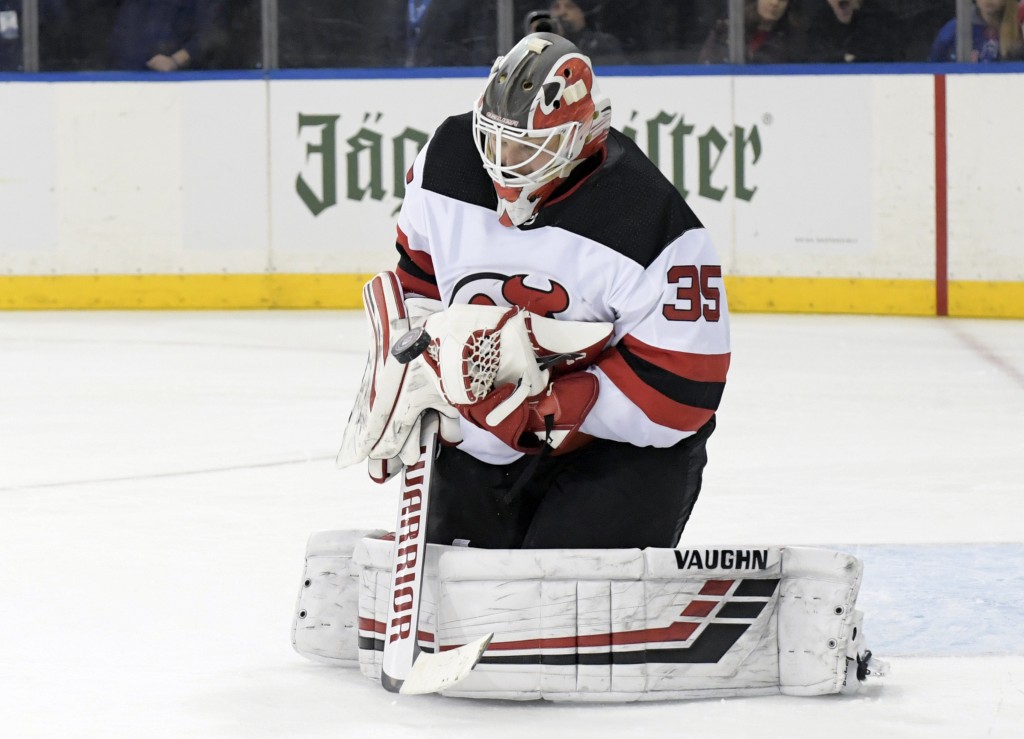 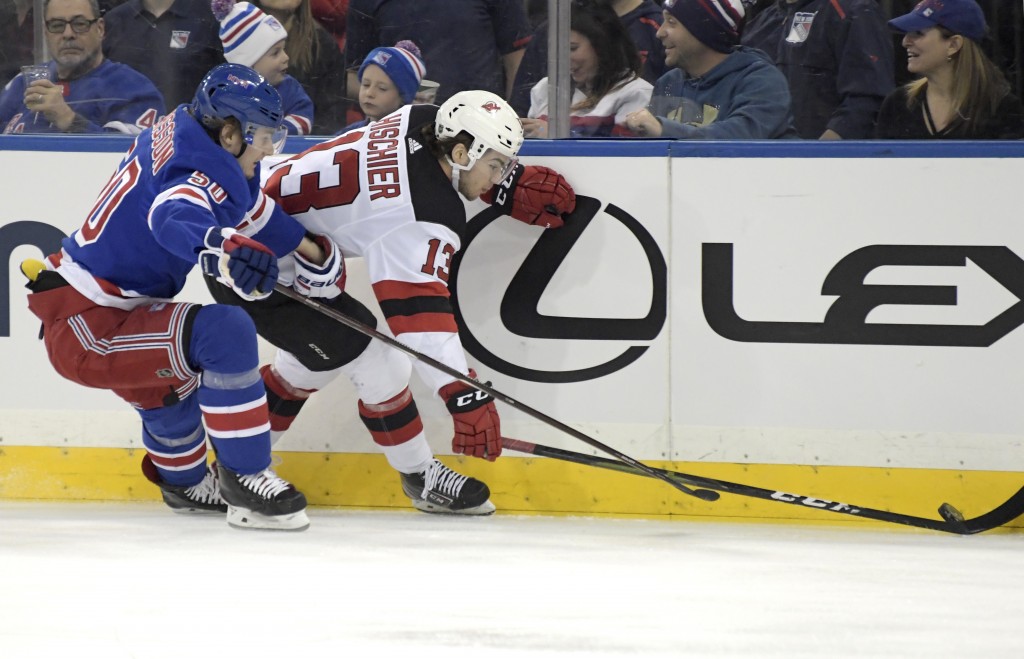 NEW YORK (AP) — Despite their trade deadline-depleted lineup, the Rangers got off to a fast start and dominated the Devils.

Ryan Strome had two goals, Chris Kreider and Jimmy Vesey each had a goal and an assist, and New York beat New Jersey 5-2 on Saturday.

Both teams sat key players with the league's trade deadline two days away.

"We all knew this day was a possibility," Rangers coach David Quinn said. "It doesn't make it less emotional."

"These guys have been here awhile. Obviously Adam has been here a little less, but he's made a big impact in that locker room," Quinn said.

"Zucc's been here for a long time and so has Hayesy, their personalities can really take over a locker room, so not only do we lose what they give us on the ice, you're also talking about a locker room presence and guys who are highly respected and highly liked, not only by the players, but the coaches. Tough day. Couldn't be prouder of our guys."

Zuccarelloo was later traded to Dallas for a conditional second-round draft pick this year, and a conditional third-round pick in 2020.

Brady Skjei also scored. Mika Zibanejad and Pavel Buchnevich each had two assists and Alexandar Georgiev made 19 saves for the Rangers.

"Obviously a ton of emotions on a day like this, tough time of year," Kreider said. "Proud how the guys battled. Didn't let it affect our start."

Andy Greene and Kenny Agostino scored and Cory Schneider had 29 saves for the Devils.

The Devils were in a similar situation to the Rangers. They traded defenseman Ben Lovejoy to Dallas for defenseman Connor Carrick and a third-round pick earlier in the day and also kept out forward Marcus Johansson.

"We have guys playing roles they're not used to playing," coach John Hynes said. "You get a guy like Lovejoy who's out. We've got continue with those guys. You've got guys learning on the job, playing different roles."

Trailing 3-0 in the third period, the Devils scored when Agostino got his third of the season at 2:20. He took advantage of a turnover in the Rangers' zone to score his first goal with the Devils.

The Rangers answered as defenseman Skjei sent a one-timer past Schneider for his fourth of the season. The score withstood a video review for goalie interference.

"To finally put one in, it felt really good. It was a good play by Mika and Kreids in front of the net and I just had to put it on net," Skjei said.

The Devils rallied again as Greene took a pass from Kyle Palmieri and wristed it past Georgiev for his fourth of the season at 12:59.

Strome added an empty-netter in the final minute for his second of the game to clinch the win.

Early on, the Rangers dominated the matchup between the area rivals and playoff also-rans in the Eastern Conference. They opened the scoring with two goals early in the first period.

Vesey scored his 14th of the season off a scramble in front of the net at 4:48 just as a Devils penalty expired. A few minutes later and with a Devils power play about to end, Vladislav Namestnikov drew a tripping penalty on Drew Stafford to give the Rangers another man advantage. And they took advantage.

With the power play nearly over, Kreider sent a no-look pass to Strome, who scored his ninth of the season. Buchnevich assisted on both of the goals.

The Rangers kept up the pressure and made it 3-0. Kreider scored on another scramble in front of the Devils' net for his 25th of the season. The Rangers outshot the Devils 15-4 in the period.

NOTES: Vesey's goal ended Schneider's shutout streak at more than 85 minutes. ... Saturday's trade gives the Devils nine picks in the 2019 draft, including five in the first three rounds. ... Kreider has scored at least 25 goals in a season for the second time in his NHL career. His career high is 28 in the 2016-17 season. ... Zibanejad has reached 60 points in a season for the first time in his NHL career. ... The Rangers tied a single-period season-high with three goals in the first period.

Devils: host the Canadiens on Monday.