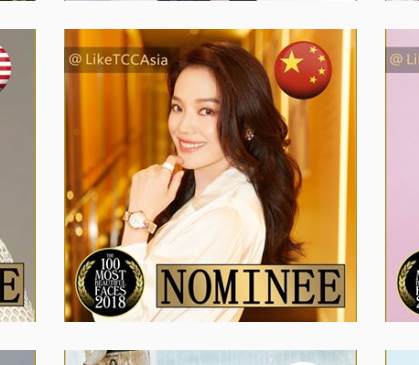 TAIPEI (Taiwan News) - The Ministry of Foreign Affairs (MOFA) has protested against the use of the red flag with five golden stars of the People’s Republic of China used to label Taiwanese artists in an online entertainment poll, reports said Saturday.

The movie-related website T.C. Candler put up dozens of pictures of male and female singers, actors and other entertainers from across the region in its first poll to find “The 100 Most Handsome Faces” and “The 100 Most Beautiful Faces” of Asia, the Apple Daily reported.

While several Taiwanese stars were nominated in either category, the Taiwanese flag was completely absent from the pictures of the candidates on Instagram.

MOFA said it would contact the organizers and ask them to correct the mistake. Most Hong Kong entertainers also had the Chinese flag pinned on their profiles instead of the local red flag with the white bauhinia flower.