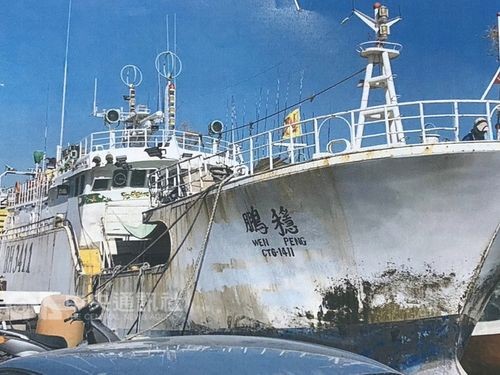 One Filipino crew member was killed and another seriously injured when one of their compatriots attacked them with a knife aboard a Pingtung-registered fishing vessel in the Indian Ocean Wednesday, the Fisheries Agency (FA) reported that day.

The agency received a distress message at 3 a.m. that the bloody incident happened aboard the longliner Wen Peng (穩鵬號) in the Indian Ocean approximately 1,540 nautical miles from the Mauritius capital of Port Louis.

FA Deputy Director Lin Kuo-ping (林國平) said in a telephone interview that the agency had received word from the vessel's Taiwanese captain, Chen Chen-mao (陳振茂), confirming that a fight occurred on the Wen Peng, which had a total of 24 crew members, including 10 Filipinos, 11 Indonesians and three Taiwanese nationals.

Initial investigation results show that some of the crew had difficulty getting along with each other and when the alleged Filipino fisherman killed his compatriot, he would not let anybody else get near him, Lin said.

According to the FA's monitoring center, the body of the dead fisherman was thrown into the sea, while many of the crew were forced to jump into the sea to escape.

Other Taiwanese and friendly fishing vessels in the area were notified to come to the ship's aid, while Taiwan's Ministry of Foreign Affairs and National Rescue Command Center contacted nearby countries to dispatch rescue ships, Lin said.

As of 4 p.m. Wednesday, the fishing boat Hung Fu 88 had arrived and rescued at least four people, with the rescue mission still underway, according to the agency.

Two of the three Taiwanese crew members on the Wen Peng, including the captain, were reported safe, but the condition of the third crew member was unknown as of press time, Taiwan's Ministry of Foreign Affairs said.