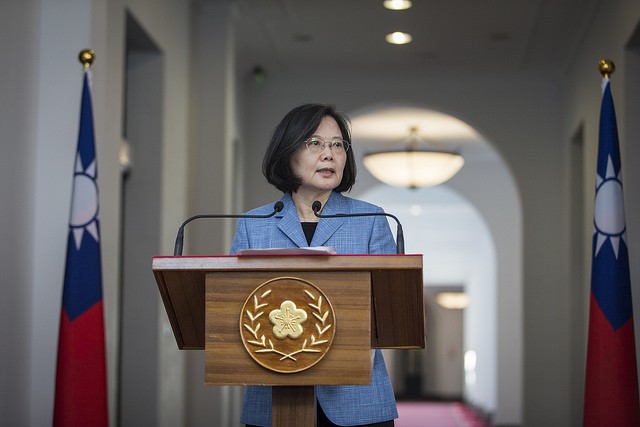 TAIPEI (Taiwan News) — President Tsai Ing-wen (蔡英文) rejected the possibility of signing a peace treaty with Beijing, noting that Taiwanese people will not agree upon any pacts crafted to undermine Taiwan as a sovereign country with a democratic government.

“I believe that Taiwanese society will never accept any political agreements that would destroy or harm national sovereignty and Taiwan’s democracy,” said President Tsai at the Presidential Office on Wednesday.

A cross-strait peace treaty was suggested by Wu Den-yih (吳敦義), chair of the opposition party Kuomintang (KMT) and a potential presidential candidate, during a radio interview last week. He said the KMT will seek a deal of that sort with Beijing, if the party wins the presidential election next year.

Opponents of a cross-strait peace treaty consider that such an agreement would likely to be based on the perception that Taiwan and China belong to the same country, since Beijing does not recognize Taiwan as a sovereign state.

In response to the KMT’s proposal, the Executive Yuan is planning to revise domestic regulations to set a higher bar for negotiating any political pacts with Beijing.

Any political negotiations and agreements concerning national sovereignty or identity would have to go through two public referendums - one consultative and one legally binding, and majority support for both referendums from the total electorate in Taiwan is necessary, according to the revised plan by the Mainland Affairs Council (MAC), Taiwan’s top government agency tackling cross-strait affairs.

In addition, a three-fourths majority vote in the legislature with at least 75 percent of legislators in attendance would also be required in between the two referendums.

There will be no equal negotiations nor genuine peace as long as Beijing does not give up military actions against Taiwan and continues attempting to impose a “one China, two systems” formula on Taiwan, the president said on Wednesday.

“Taiwan’s future should be determined by ourselves,” said President Tsai, pledging to run for re-election and fight for the country’s self-determination for future generations.

The possibility of a re-election for President Tsai was put in doubt after the landslide defeat of the ruling Democratic Progressive Party (DPP) in the local elections last November.

However, the president successfully regained some popularity after she publicly rejected the “one country, two systems” arrangement for Taiwan proposed by China’s leader Xi Jinping during a New Year’s talk.