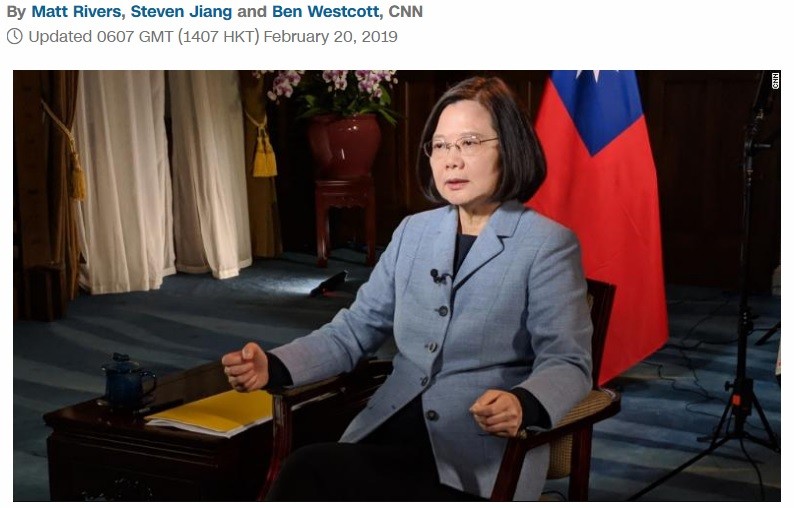 TAIPEI (Taiwan News) -- In an interview with CNN, Taiwan President Tsai Ing-wen (蔡英文) said that the country must be prepared for China's growing military threat, but the rest of the world should take notice because it is a sign of more to come from the communist regime if other nations sit idly by.

In an interview with CNN correspondent Matt Rivers, Tsai warned that the military threat posed by China is increasing "every day" and has reached a point in which Taiwan is already planning for the first wave of attacks. Tsai warns in the interview that if the rest of the world acquiesces to Chinese interference in Taiwan's democracy and military intervention, then it can expect a repeat of this pattern of behavior in other countries:

"If it's Taiwan today, people should ask who's next? Any country in the region -- if it no longer wants to submit to the will of China, they would face similar military threats."

She emphasized that China's increased hostility towards Taiwan reflects its aggressive new expansionist policy which increasingly relies on military might, and therefore many other countries in the region could soon find themselves the target of this policy.

When Tsai took office in 2016, she refused to recognize the "1992 Consensus," and only acknowledged that the 1992 Taiwan-China talks were a "historical fact." In response, China has been seeking to punish Taiwan by excluding it from international organizations, stealing away diplomatic allies, intimidating government bodies and corporations, holding live-fire drills in the Taiwan Strait, and circling bombers around Taiwan proper.

Tsai told the news agency that with China's increased strength and ambitions, the threats posed by the communist country to Taiwan are growing. Tsai said that Taiwan's very existence as a sovereign, democratic nation is now at stake:

"Our challenge is whether our independent existence, security, prosperity and democracy can be maintained. This is the biggest issue for Taiwan."

When asked if President Trump would support Taiwan in the event of a military attack by China, Tsai instead focused on the importance for Taiwan to build up its own defenses. Tsai said that given the growing imbalance between China's military and Taiwan's forces, "We have to be prepared at all times."

Tsai said that because China is rapidly modernizing its armed forces, and as Chinese President Xi Jinping has emphasized he would not rule out force to annex Taiwan, she said that the country is "on alert 24/7" for any signs of a Chinese attack. In fact, Tsai indicated to Rivers that Taiwan is already planning for China's first wave of attacks and the subsequent international response:

"What we are expecting is, after withstanding the first wave of Chinese attacks ourselves, the rest of the world would stand up to exert strong pressure on China."

However, Tsai said that these endless threats by Beijing are only serving to strengthen resolve in Taiwan against being influenced by the communist state. Tsai told the news agency that "every such move has only further upset and alienated Taiwanese people. China's behavior has only backfired in Taiwan."

Regarding Trump's "America First" policy and apparent withdrawal of the U.S. from the world stage, Tsai justified it from the point of view of a president, saying "Any President has to take multiple factors into consideration when making decisions, especially domestic decisions."

Lastly, when asked if she would accept an potential invitation to speak before the U.S. congress, Tsai told Rivers that she would need to carefully weigh "whether such a move benefits Taiwan, our relations with the US and regional stability." 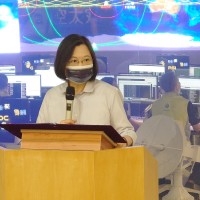