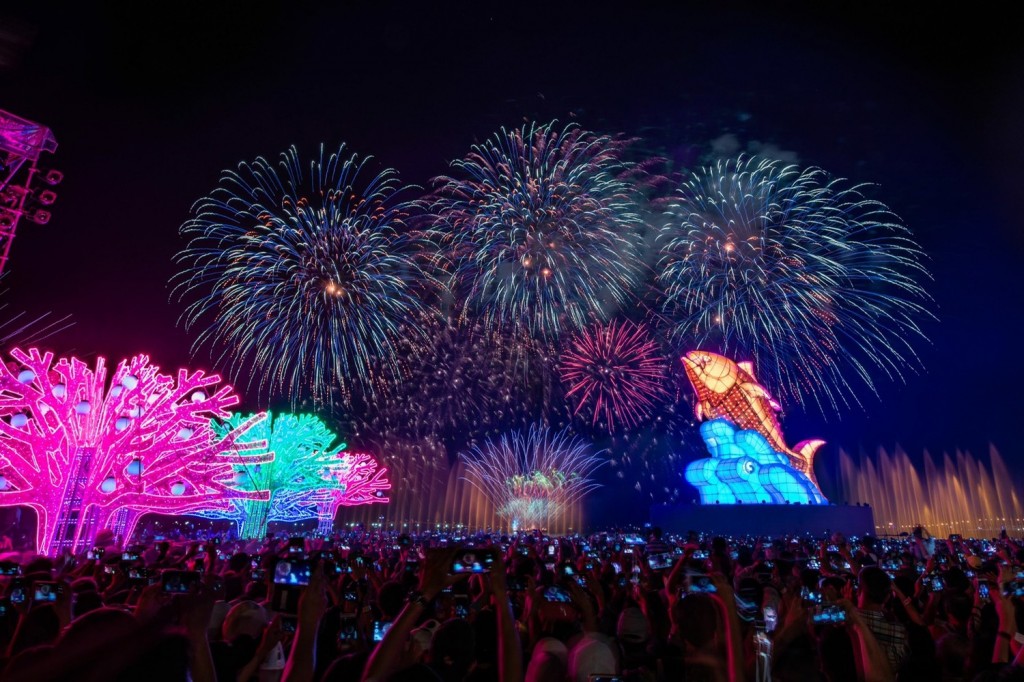 At 7 p.m. last night, Taiwan President Tsai Ing-wen (蔡英文) and Premier Su Tseng-chang (蘇貞昌) presided over the opening ceremonies of the festival, which included spectacular light performances on land, sea, and air. According to statistics from the Pingtung County Government, over 600,000 visitors attended the opening night of the festival.

Last night's opening ceremony was timed to coincide with the traditional date of the Lantern Festival, which is the fifteenth day of the first month in the lunisolar calendar. This year's festival, which is in its 30th year, is taking place in three zones in Pingtung County, including Dapeng Bay, Pingtung, and Donggang. An air show comprised of 300 lit UAVs dazzled spectators with synchronized light displays in the night sky. Formations by the UAVs included the Chinese characters for "Pingtung" (屏東), the English letters for "Taiwan," and the Eluanbi Lighthouse. Throughout the festival, which runs from Feb. 19 to March 3, the main stage at Dapeng Bay will feature "a main theme and a main show," including performances from Voalá of Spain that combine aerial acrobatics and dances, a Korean drumming troupe, and Taiwan’s U-Theatre drumming troupe.

The Chinese characters used in the theme of the festival, "Pingan Penglai. Light-up 30," carry many meanings, including peace (ping an), the host venue of Pingtung, the arrival of a mythical bird (peng), and a fabled abode of the immortals. For the first time in the history of the festival, a main venue is a national scenic area -- Dapeng Bay --- which covers a land area of 42 hectares and a water zone of 200 hectares. The Dapeng Bay venue, located entirely along a coastal lagoon, has broken away from the traditional practice of basing the main lantern the Chinese zodiac, and instead features Donggang's bluefin tuna, which will become a permanent landmark after the show concludes.

In an effort to manage the large crowds, shuttles will stop carrying visitors into the park at 8 p.m. and the last shuttle taking tourists out of the park departs at 11 p.m., according to the Pingtung Department of Transportation and Tourism. Based on the first few trial days of the festival, crowds are peaking between 7 p.m. and 8 p.m. The department has three pieces of advice for would-be visitors to best enjoy their experience at the glowing gala:

1. Take the train to Pingtung before transferring to shuttles.

3. Plan in advance and either prioritize one's favorite lanterns to see or visit different sections on different days. In addition, the Pingtung County Government and Kao Chi Travel Co., Ltd. are working together on offering a cruise to enjoy the lanterns by sea. Starting on Feb. 19, a ship will depart at 3:30 p.m. from Terminal 2 at Banana Pier (香蕉碼頭) in Kaohsiung, enabling 120 visitors to take part in the first lantern cruise in the history of the Taiwan Lantern Festival.

One ship per day will be available for cruises from Fridays through Sundays for the duration of the festival, with a limit of 120 passengers per trip. For more information on the cruises, please call Kao Chi Travel Co., Ltd at 07-7192888. Video of all the performances seen at last night's opening ceremonies:

Video and photos taken by Tsai of the event:

For more information about the Taiwan Lantern Festival, please visit its official website.