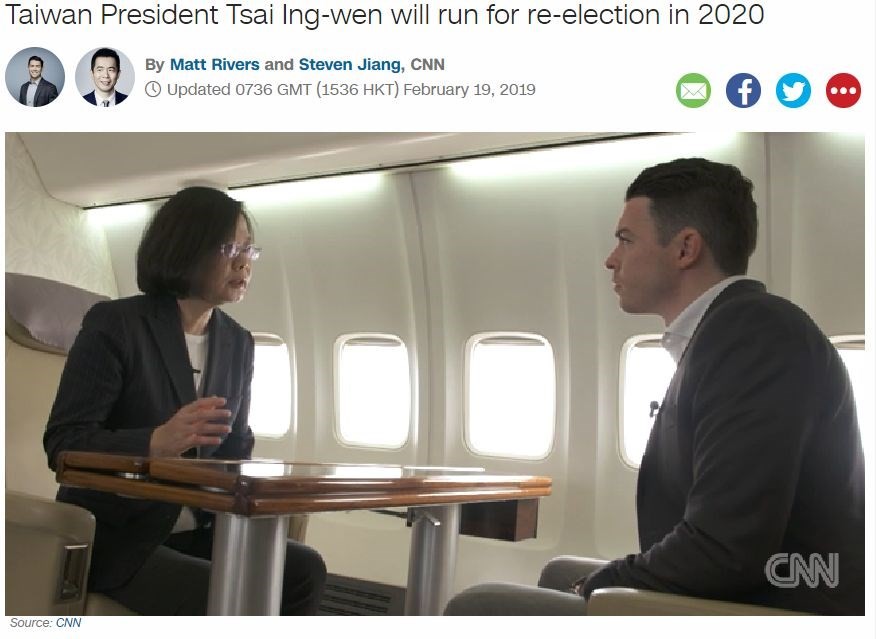 TAIPEI (Taiwan News) -- In an interview with CNN today (Feb. 19), Taiwan President Tsai Ing-wen confirmed that she will run for re-election, despite a call by some senior voices to step aside and mounting pressure from Beijing.

In an interview with CNN correspondent Matt Rivers onboard her presidential jet, Tsai announced her desire to "complete" her vision for Taiwan. Tsai indicated that she still felt she could contribute to Taiwan and complete the goals she had set out for her tenure: "It's natural that any sitting president wants to do more for the country and wants to finish things on his or her agenda."

Tsai, who was the first female to be elected president of the nation in 2016, had a strong mandate for change when her Democratic Progressive Party (DPP) swept the 2016 elections. However, in 2018, her party suffered many losses to the opposition Kuomintang (KMT) in the "nine-in-one" local elections, which included disappointing defeats on a number of referendums.

In response to fears that she may face an uphill climb and a call by senior party voices to step aside in the next election cycle, Tsai told CNN that she is still "confident" that she can win again:

On Jan. 2, Xi gave a speech commemorating the 40th anniversary of a policy message from the Chinese communist Party (CCP) entitled “Message to Compatriots in Taiwan,” made on Jan. 1, 1979. During the speech, Xi insisted that Taiwan "must and will be" united with China based on the "1992 consensus" under the "one China principle."

As for the stinging defeats of DPP candidates and the failure of a number of progressive referendums, Tsai indicated that the backlash was the result of many not yet realizing the benefits of reforms which are still in their infancy. "You get attacks, you get criticism, the people don't feel the result of the reform so much when you've just started," Tsai said to CNN.

When asked by Rivers if she had any regrets about her term in office thus far, she lamented that she might have been so focused on implementing both her domestic and foreign policies that she may have seemed too detached from the public:

"I spent too much time in managing the government affairs and I spent a lot of time making foreign visits to our diplomatic allies. Many people thought I was a bit detached from them."