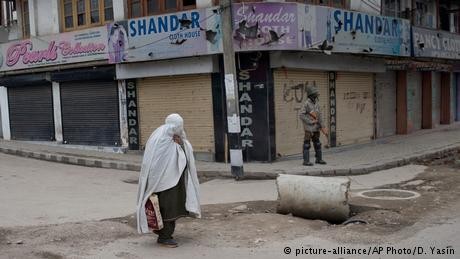 Residents of India-administered Kashmir observed a shutdown of thousands of businesses on Sunday after a deadly suicide bombing reignited tensions in the disputed region.

The summer capital of Jammu and Kashmir state, Srinagar, saw most public transport stay off the roads, while shops and other establishments remained shut across the valley.

Internet services also remained off as part of a curfew imposed by the local government in the wake of Thursday's car bombing — the worst attack on the country's security forces in 30 years.

Attacks against Kashmiri people — who are mostly Muslim in Hindu-majority India — have been reported in several parts of the country following the bomb attack, which killed 41 soldiers.

"We are giving 48 hours ultimatum to the government to control the situation. It is the duty of the government to ensure the safety of the people regardless of the community or region they represent," the head of a local traders' association, Mohammad Yaseen Khan, told the paper.

A senior Home Ministry official confirmed to the NDTV news channel that in other Indian states, students and other people from Jammu and Kashmir had been reportedly "experiencing threats and intimidation" from Hindu crowds. The ministry said it had ordered increased safety measures to be rolled out.

Thursday's suicide bomb attack was carried out by a local Kashmiri youth who investigators say was indoctrinated by the Pakistan-based Islamist militant group Jaish-e-Mohammed (JeM).

The school dropout rammed a car laden with explosives into a convoy carrying 2,500 Indian paramilitary troopers on a highway between Jammu and Srinagar.

Read more: Why Kashmir attack could spark a military confrontation in South Asia

The killing of scores of soldiers fueled huge public anger and prompted Indian Prime Minister Narendra Modi — who will seek a second term in national elections scheduled for April-May — to give security forces "full freedom" to decide an appropriate response.

Within hours of the attack, New Delhi withdrew trade privileges for Pakistan and imposed a 200 percent customs duty on all imports from its neighbor.

Hundreds of security forces were deployed to hunt for JeM's local commander, Mohammed Umair, who is believed to have masterminded the bombing.

Security forces suspect he is in hiding in southern Kashmir, the Reuters news agency reported, having entered Indian Kashmir from Pakistan in September.

Late on Sunday, 23 men were detained in Kashmir for their alleged links to JeM and were questioned by representatives from India's National Investigating Agency.

India has demanded that Pakistan close down JeM and other Islamist militant groups that operate from its soil.

Islamabad has rejected the suggestion it was linked to the attack and warned New Delhi against a "knee-jerk reaction without investigating the incident."

Kashmir, a Muslim-majority region at the heart of decades of hostility since both countries achieved their independence from Britain, is claimed in entirety by India and Pakistan but ruled in part by both the South Asian countries.

The region is the world's most militarized zone, with some 500,000 Indian troops deployed to fight a rebellion that broke out in 1989. Scores of armed groups are now involved.

Tens of thousands of people, mainly civilians, have died in the conflict. Last year was the deadliest in a decade, with almost 600 people killed.