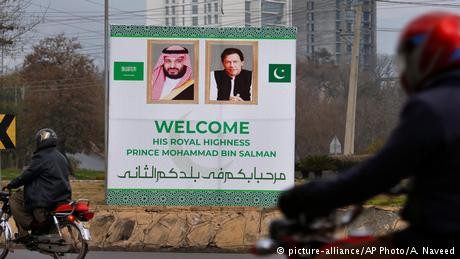 Saudi Crown Prince Mohammed bin Salman arrived in Pakistan on Sunday, kicking off a 6-day Asia trip that will also take him to India and China.

The crown prince was greeted with a 21-gun salute and warm embraces from Prime Minister Imran Khan and army chief General Qamar Javed Bajwa, just months after he was linked to the murder of dissident journalist Jamal Khashoggi.

Imran Khan drove the crown prince to the prime minister's house for discussions.

Monday has been declared a public holiday and schools and offices will be closed in honor of the Saudi visitor and his delegation of businessmen and Cabinet ministers.

The visit to Islamabad comes amidst deep divisions between Pakistan and its two neighbors, India and Saudi foe Iran, both of which accuse Pakistan of harboring militants who have recently carried out suicide attacks in their territories.

Several hours before Crown Prince Mohammed's arrival, the Pakistani government called New Delhi's accusations "well-rehearsed tactics from [the] Indian playbook after such incidents in the past."

A signal to the West

During his two-day visit, the crown prince is expected to sign deals worth billions. Reuters cited Saudi-owned Arabiya TV on Sunday as saying agreements worth $20 billion (€17.7 billion) had been signed.

Economic cooperation between the two countries "is going to grow every month, every year," the crown prince said at a joint press conference with Khan on Sunday. "We believe Pakistan is going to be a very important country in the coming future and we want to be sure we are a part of that."

The deals are expected to include a $10 billion injection of funds for an oil refinery complex in the nation's southwest, a much-needed lifeline as Pakistan faces a struggling economy and an expanding deficit.

Analysts noted that the high-profile Asia trip was also meant to send a message to Crown Prince Mohammed's Western allies, many of whom have turned their backs on him over Khashoggi's killing in Istanbul, that he still has plenty of Asian friends willing to do business.

The crown prince also said he intends to make Saudi Arabia a tourism destination: "We are going to target 100 million tourists … We cannot commit to 2030 but we will reach that [figure] one day," he said.

The crown prince travels on to India on Tuesday and then to China later in the week.