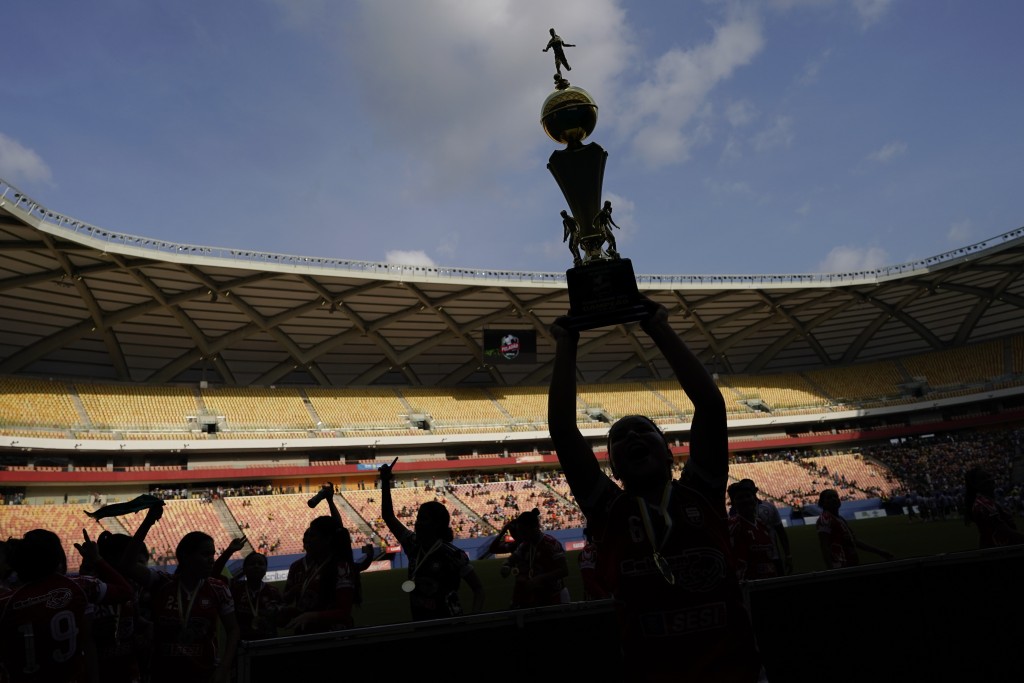 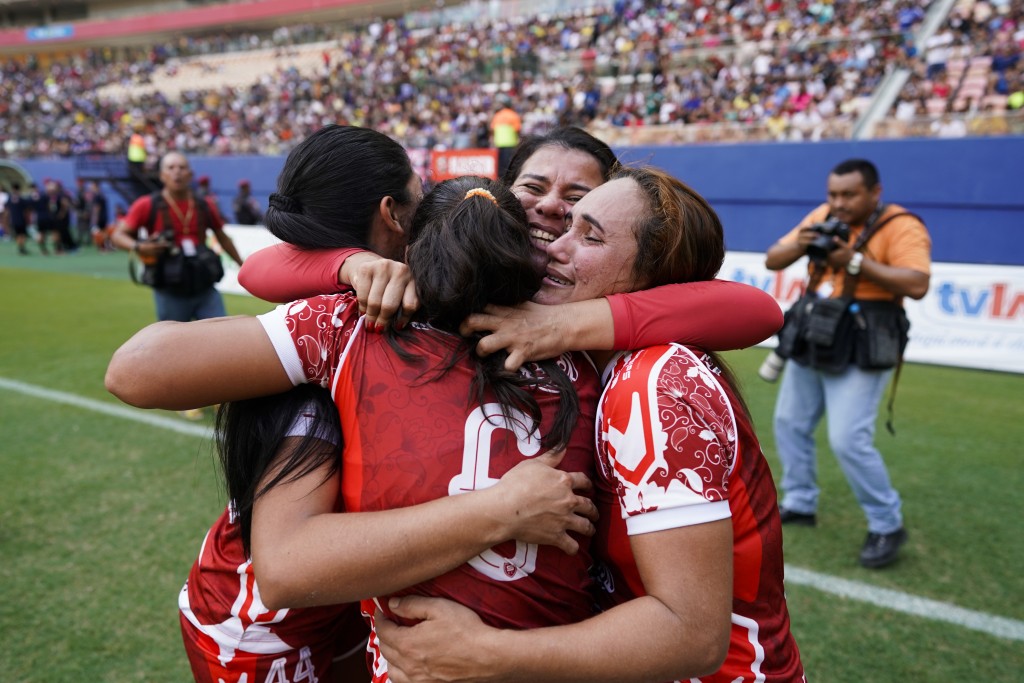 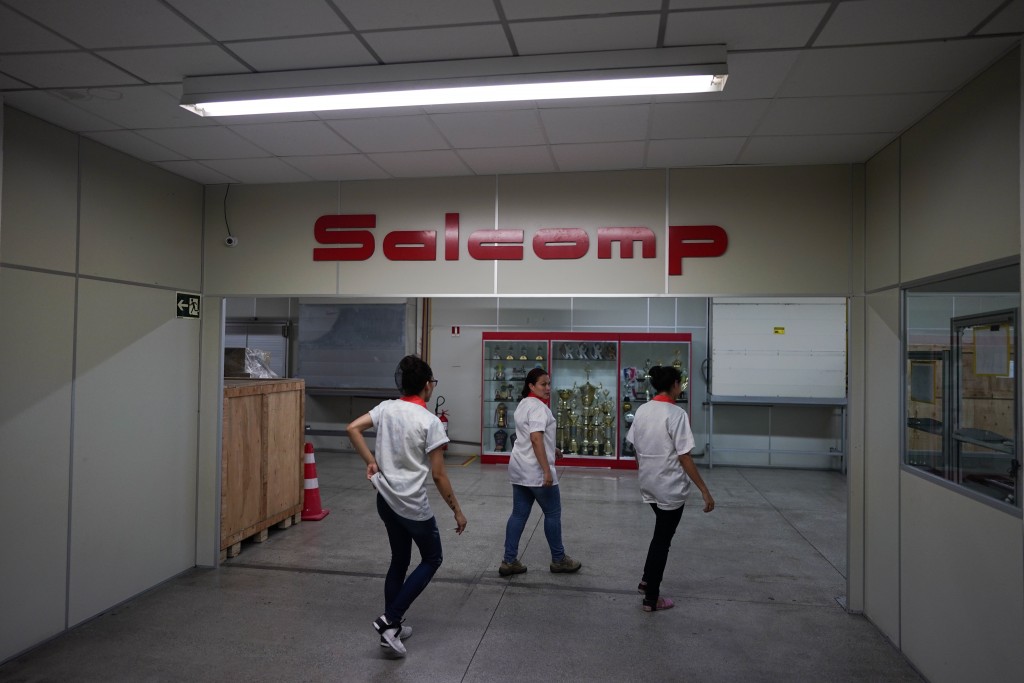 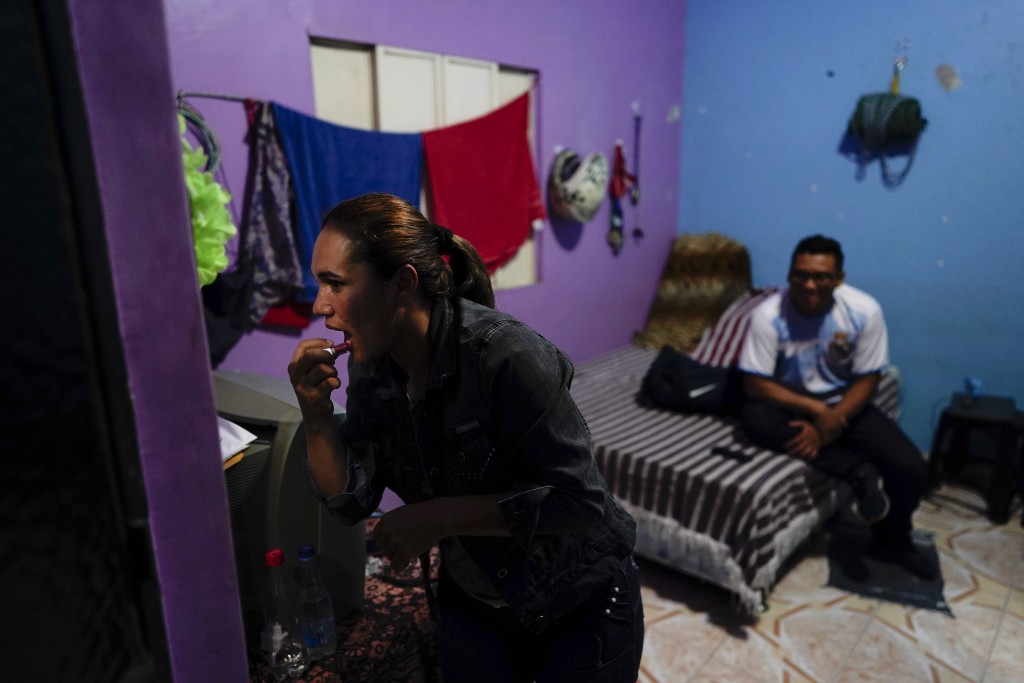 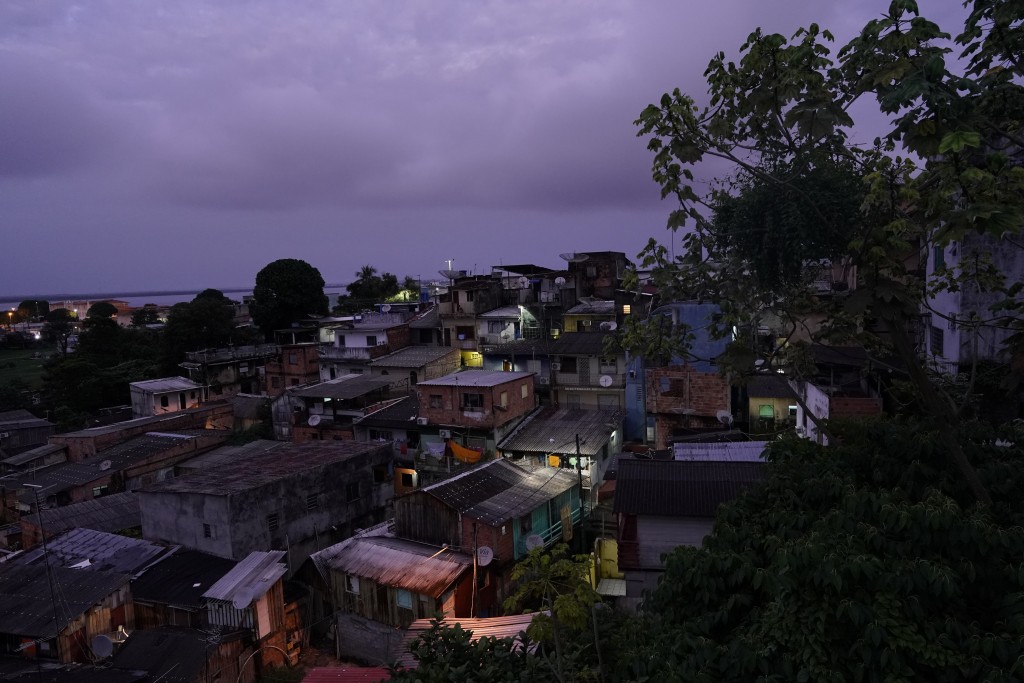 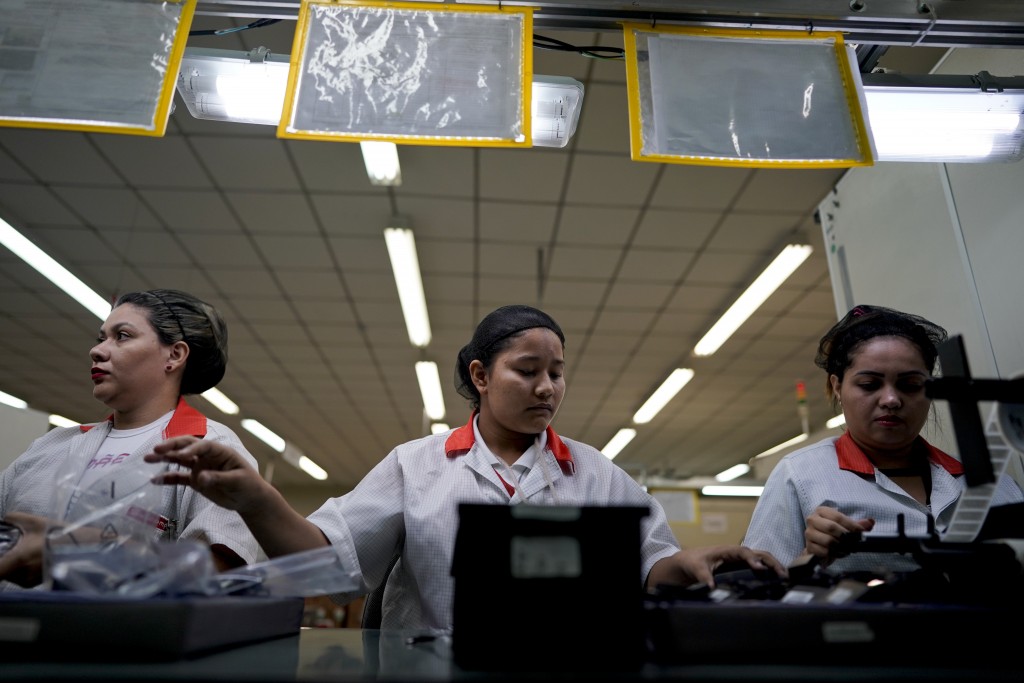 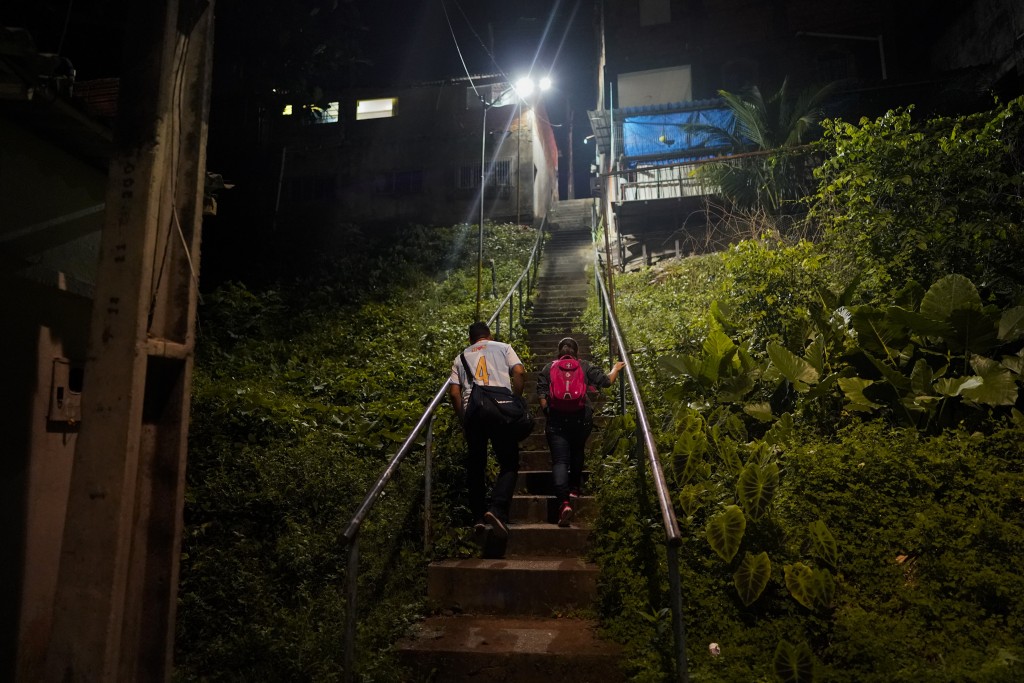 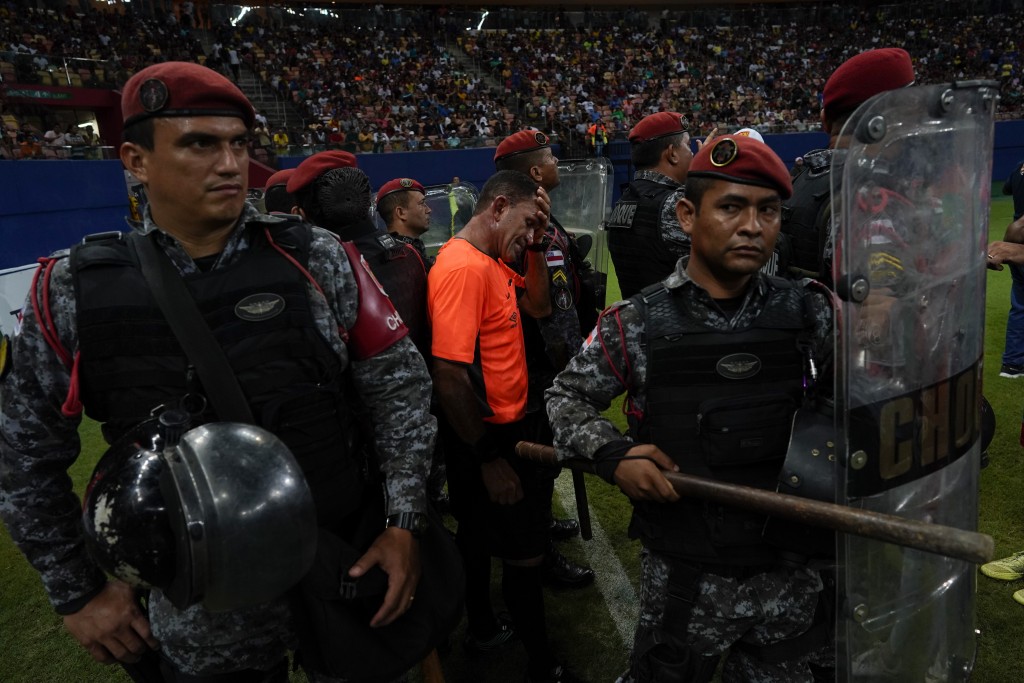 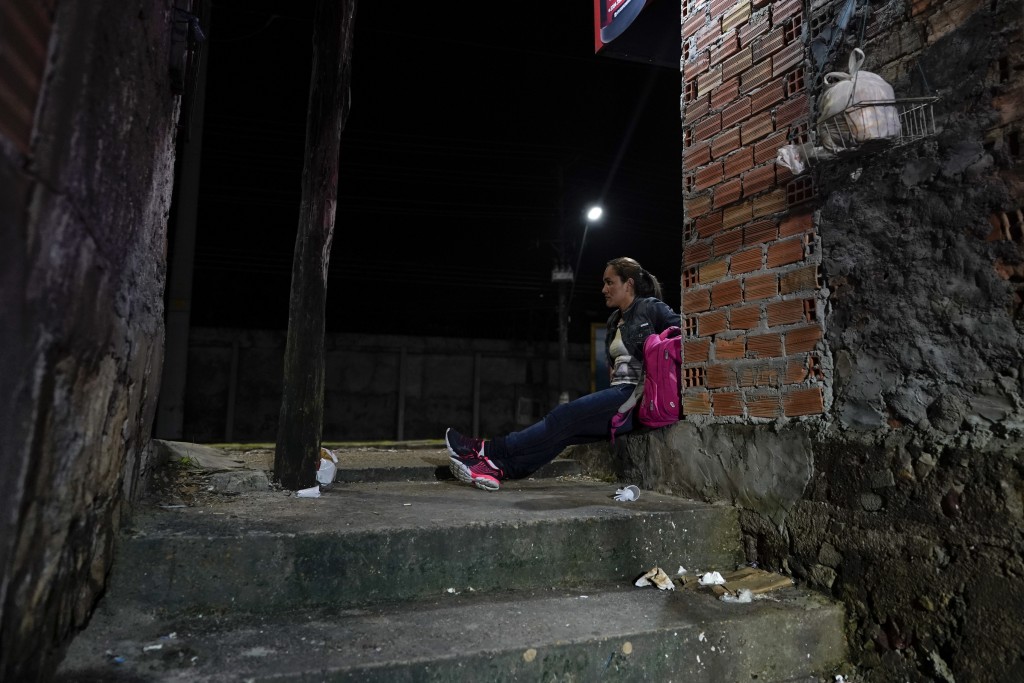 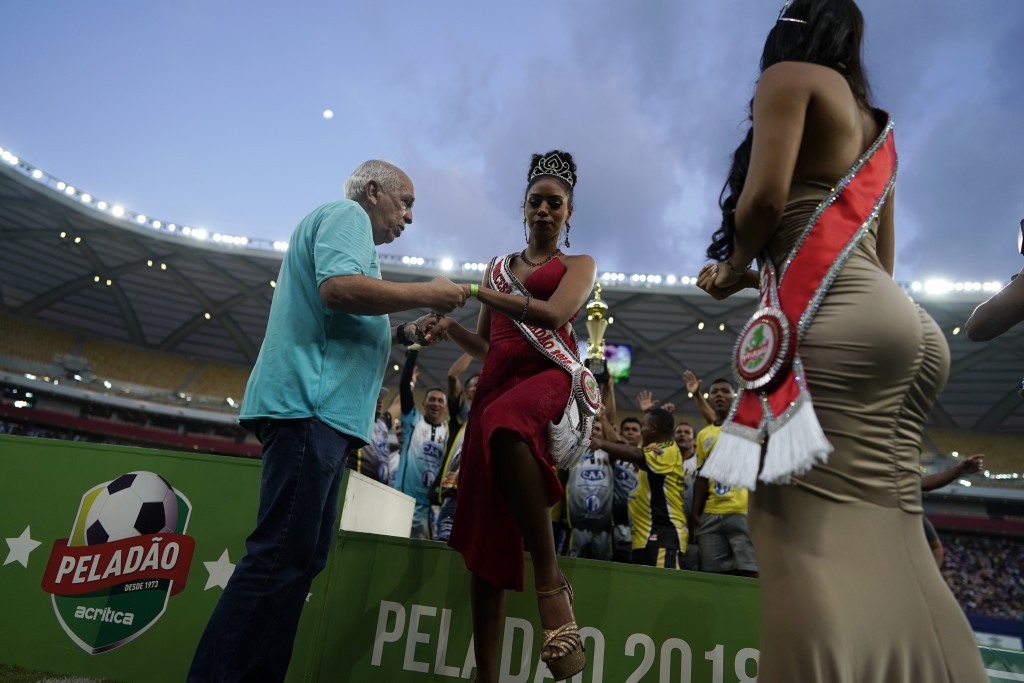 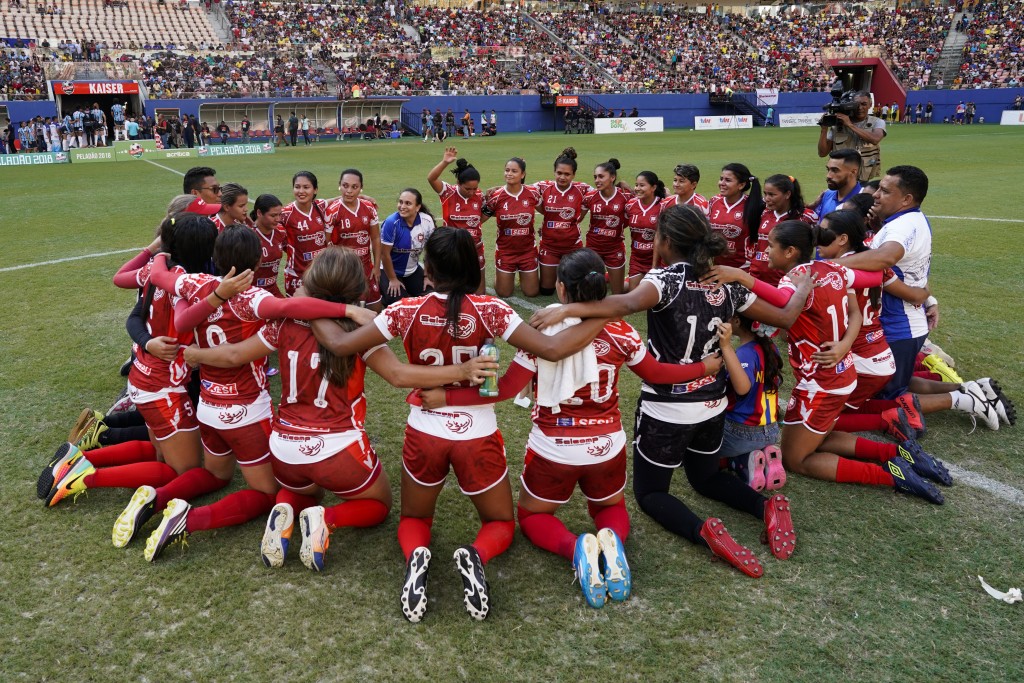 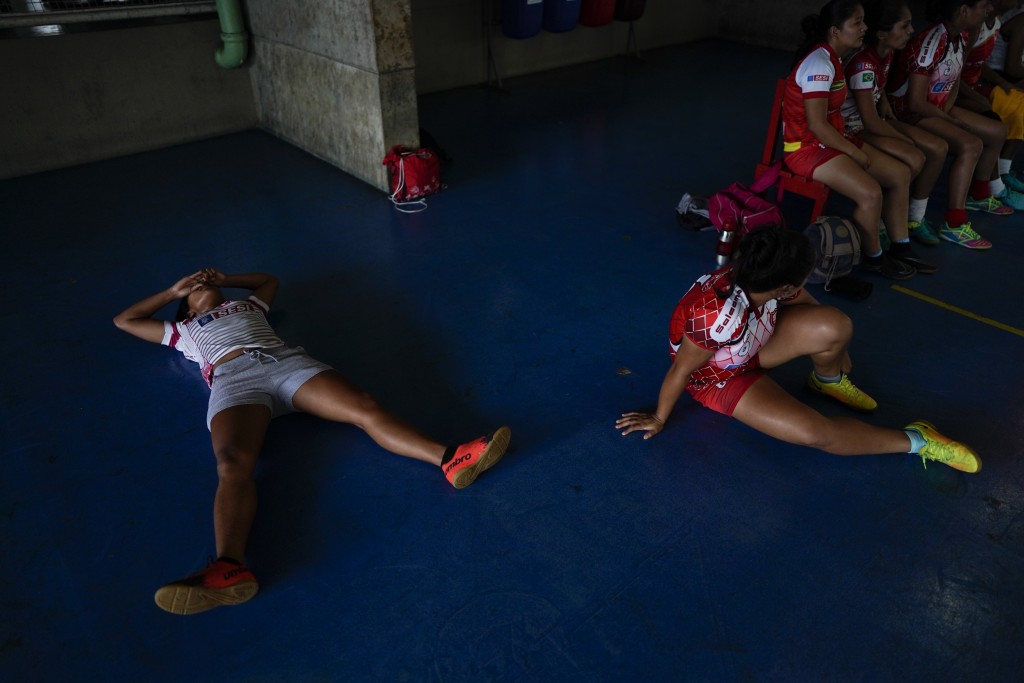 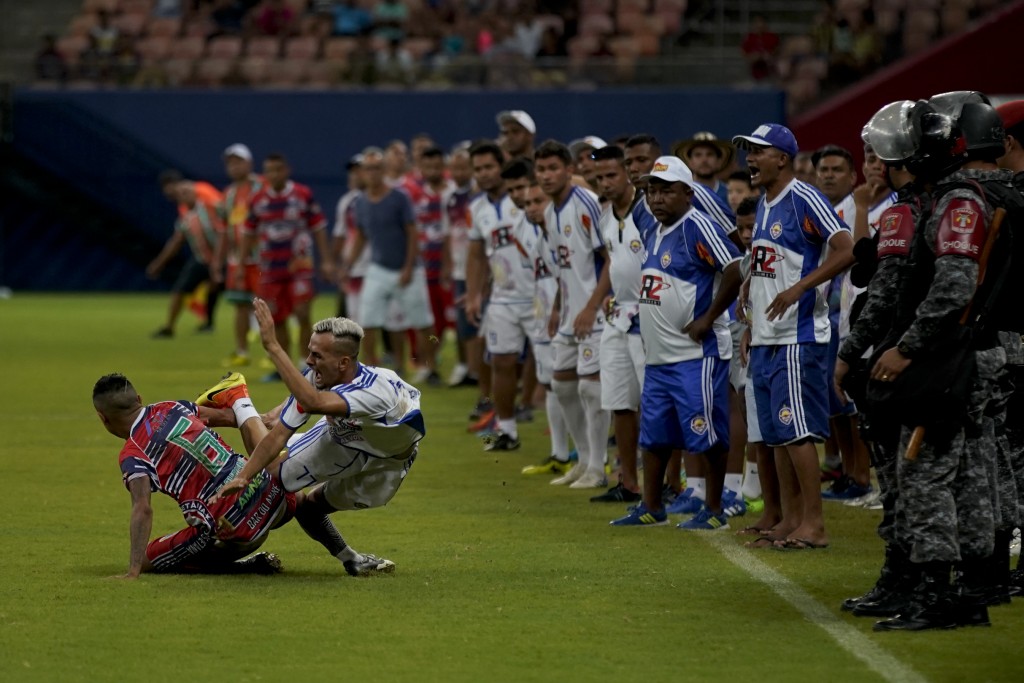 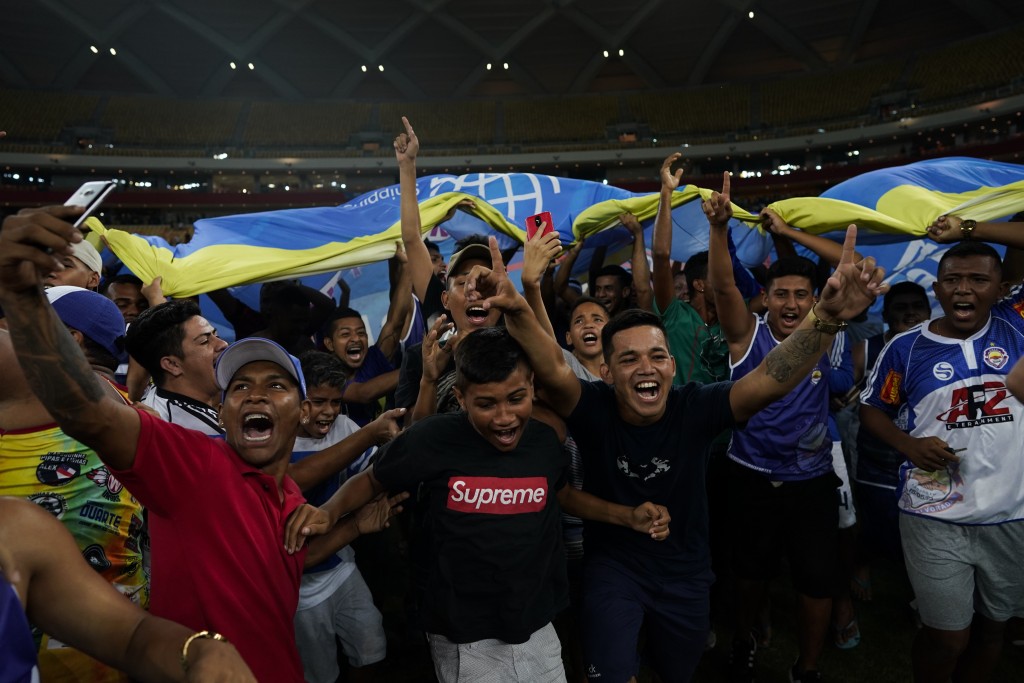 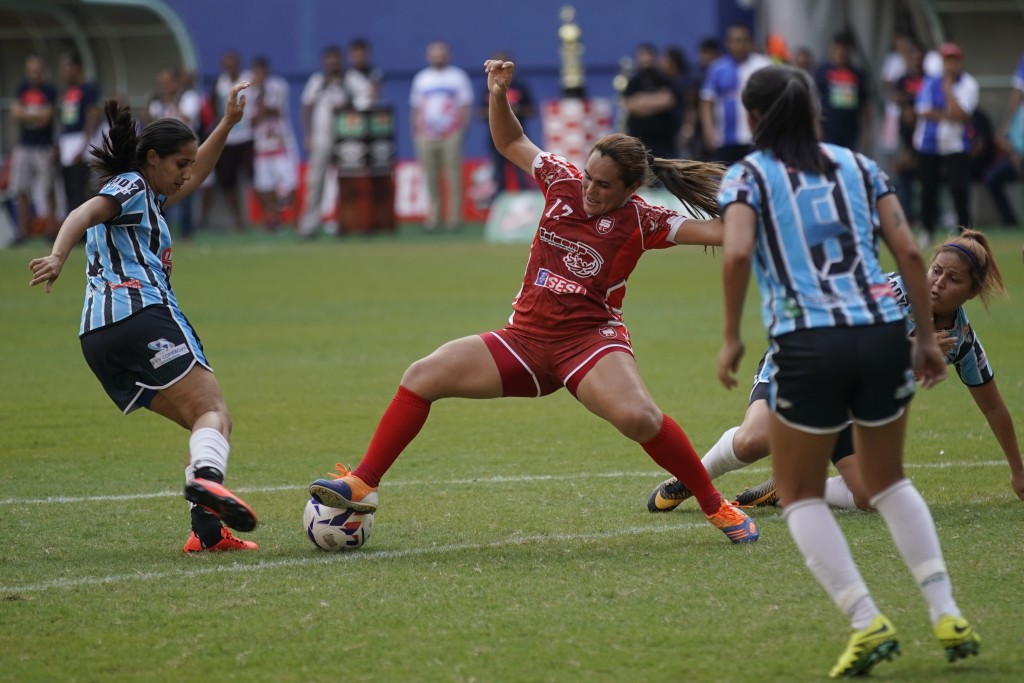 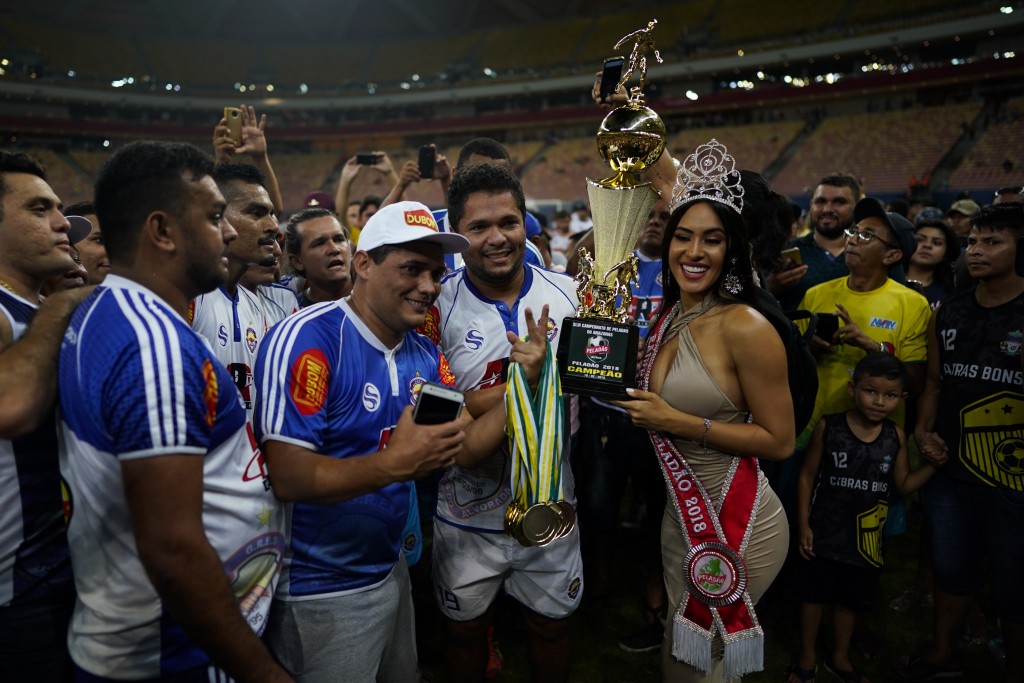 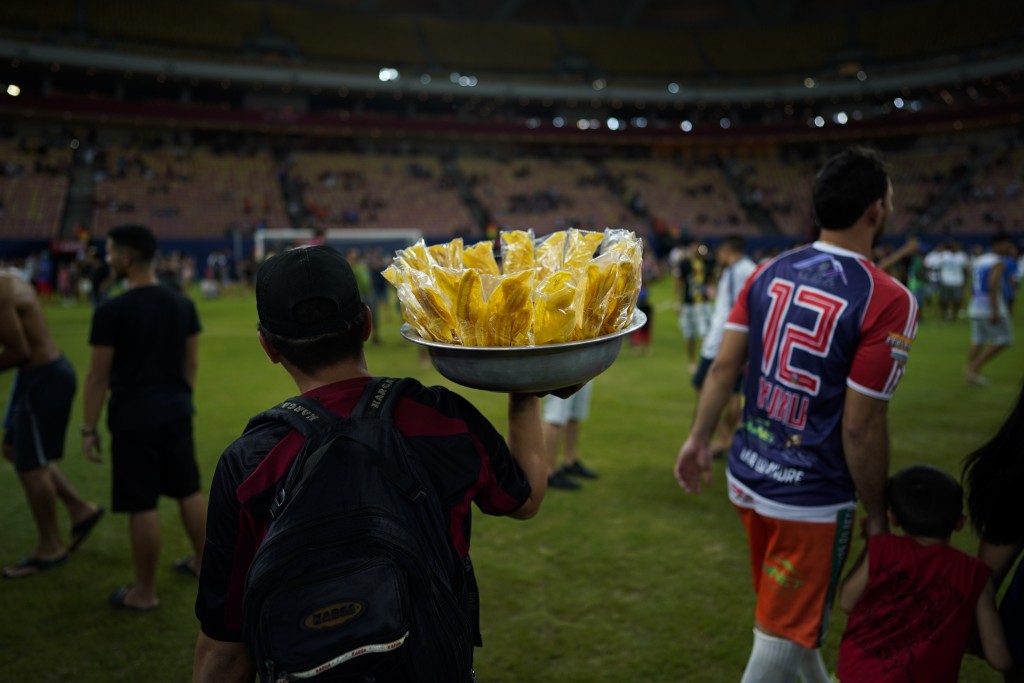 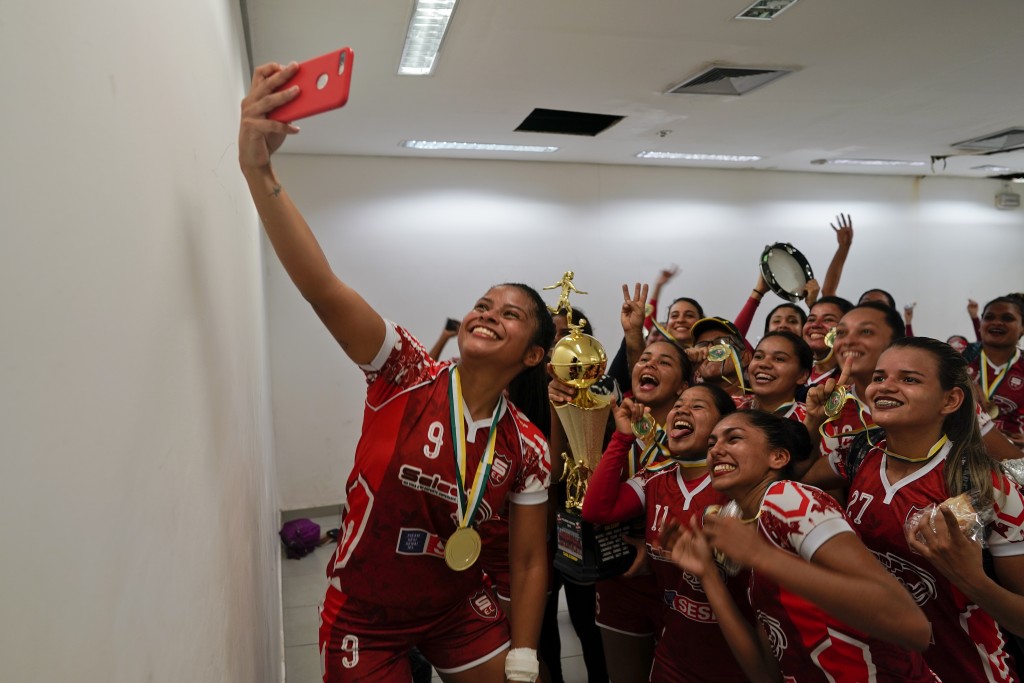 MANAUS, Brazil (AP) — It's 4:10 a.m. in the largest city in Brazil's Amazon region, and striker Suzy Carvalho is busy preparing for the biggest game of her amateur career.

Dressed in jeans, a T-shirt and sneakers, the 34-year-old mother of two steps out of her boyfriend's rented bedroom and into the night, walking a tight favela road and climbing a steep stairway to catch a bus. While neighbors return home from a hard night of partying, Carvalho thinks about her strategy for the women's final of the Peladao, one of the biggest amateur soccer tournaments on the planet.

But before she steps on to the pitch for the Saturday afternoon game, she must first work a full shift at a local charger and adapter factory, where most of her teammates also work.

They will leave only 90 minutes before kickoff, excited for the chance to play a final in front of thousands of fans in Manaus' 2014 World Cup stadium, the Arena da Amazonia.

"This time I can't waste time flipping from one side of the pitch to the other," said Carvalho as she waited for the bus to get to work. "I have to be more goal-focused. Last year I didn't do that, and we lost the trophy in the dying seconds of the final. I cried so much. That can't happen again."

"Pelada," in Portuguese "naked" or "bare," is what Brazilians call amateur soccer, often played on improvised pitches on streets, fields, beaches and river banks. The annual gigantic Amazon Peladao, which began in 1973, exists because of the passion of between 700 and 800 teams.

This year's finals — three games for different men's age groups and the women's game that Carvalho played in — were attended by some 20,000 fans who came out for an event that mixed soccer, beauty, banana chips and partying.

Many players had eye-catching hairstyles, including a boy aged 13 with his hair dyed completely white, many trying to copy whatever style Neymar had throughout his career and others whose hair carries inscriptions like "I love Jesus." But during the games, they were hard on each other, diving in for the ball during the matches that feature two 25-minute halves.

Goals often featured Cristiano Ronaldo-style celebrations, with some overweight players jumping in front of spectators and opening their arms, proclaiming that they have arrived.

For players, coaches and organizers, mostly from this city of almost 2 million people with little connection to the rest of Brazil, the tournament is very serious business.

On Saturday, players in the men's final invaded the pitch each time they disagreed with the referee, coaches made gestures suggesting the linesman was a thief, homophobic insults came fast and furious, and riot police were on hand to protect referees from violence on three occasions.

After a 1-1 draw in regular time, Alvorada beat Betania on penalties in Saturday's main Peladao event for men aged between 16 and 38. The crowd again invaded the pitch but this time to celebrate with banana chips while spraying beer.

Carvalho had a much quieter time in her final. After a poor first half between her Salcomp team and rivals Gremio, she feared she would get a silver medal again.

The factory workers looked tired playing a Gremio team whose players had been able to rest before the match began.

Then, the momentum began to shift in Salcomp's favor.

"It was the God of soccer intervening for us," Carvalho said.

One of the Gremio players got a red card for pulling her shirt off before a substitution. That unexpected event gave Salcomp a big advantage. And in the final seconds of the match, Salcomp striker Carol headed home to make it 1-0. It was the team's second title, the first was in 2011.

"Every sacrifice we make is worth it. We won the Peladao and now I can sleep better," Carvalho said.

The majority of Peladao players do not dream of turning professional, although a few have managed to do that with small clubs in Brazil's northern states.

Saturday's finals at the Arena da Amazonia did have an air of professionalism considering that most of the competition is contested on muddy Manaus pitches that barely qualify as a playing surface.

Alvorada players will share a car as a prize. The brand and the model are still to be chosen this year but it is the only prize at stake. The only award for all the others is in their passion for soccer.

Fans pay nothing to watch. The jerseys of the top teams usually feature ads of local businesses, but all they do is to provide some kind of support for the squads to exist.

"These games are not beautiful to watch," said teacher Caique Franklin, 36. "But this is a lot of the soul of the Amazon. We love our communities and the Peladao is a great expression of the love for our communities. It is not about technique, it is about us."

The Peladao registered more than 30,000 players since June, said Arnaldo Santos, an 80-year-old passionate coordinator of the tournament for almost two decades.

Players of school age can only register if they have documents to prove they are attending classes. Those who get yellow or red cards during a match can only play in their team's next match if they give at least 30 plastic footballs to charity organizations.

A major rule for teams involved in the men's tournament has also made the Peladao famous nationwide in beauty-obsessed Brazil.

All men's teams must have a candidate for Queen of the Peladao but, if the woman they choose decides to abandon the bid, her team is removed from contention. This year that was the case for more than 40 teams.

This year's queen was chosen in December during a reality television show called "Peladao on board," with 12 finalists battling it out in a public vote as their yacht navigated Amazon rivers.

The winner, 25-year-old Isabelle Nogueira, was picked by 54 percent of viewers of the reality show, winning $8,000.

Rayssa Santos, a 21-year-old mixed-race university student, was picked as the runner-up or "princess." She believes the Peladao beauty pageant helps peoples of the Amazon basin feel proud.

"We are powerful, we are beautiful and we deserve to be seen. I want other girls to feel proud when they look at me, a girl coming from the slums, with black and indigenous blood, taking part in the contest to be Queen of the Peladao," she said. "I didn't get it this year, but I will keep trying."

With her winner's medal in hand, Carvalho celebrated in the Arena da Amazonia dressing room with a lot of singing while downing cheese and ham sandwiches and soda.

She decided not to spend the night at her boyfriend's to celebrate the Peladao title. Instead, she planned to ride on a bus for more than an hour to one of the most distant regions of the city, where she lives.

"The best of all is that tomorrow is Sunday," she said. "And I don't need to work on Sunday."