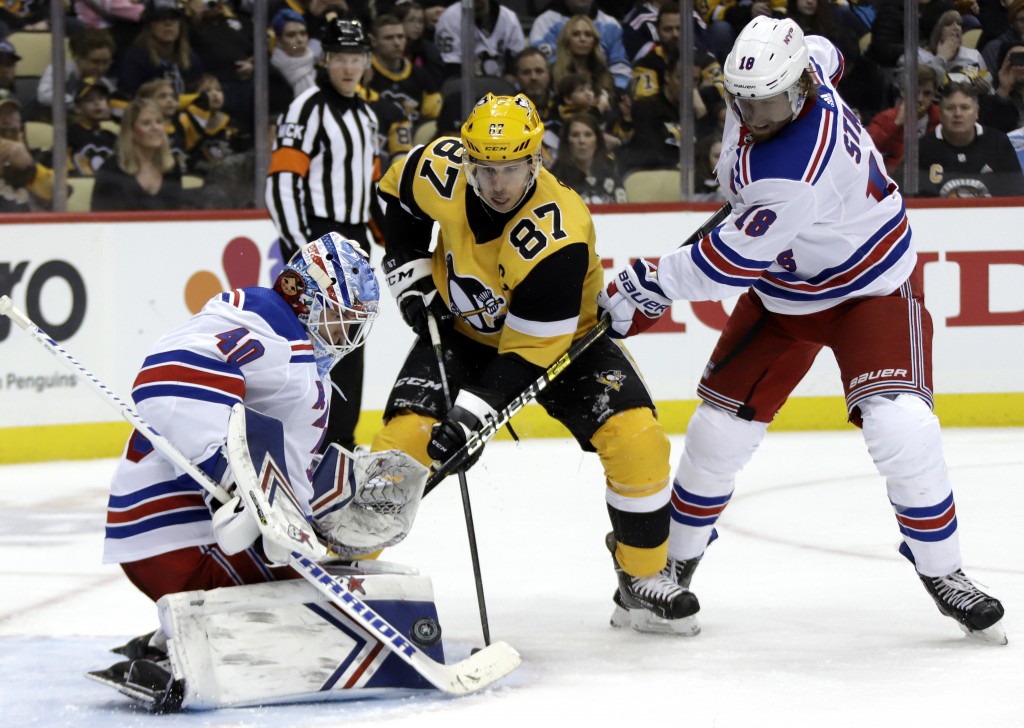 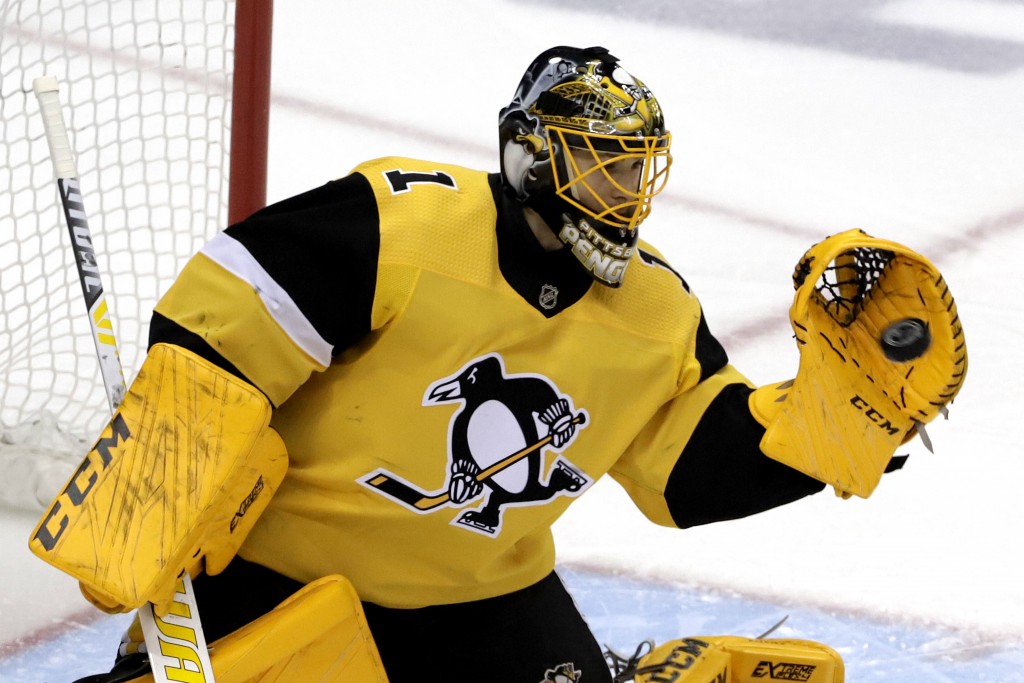 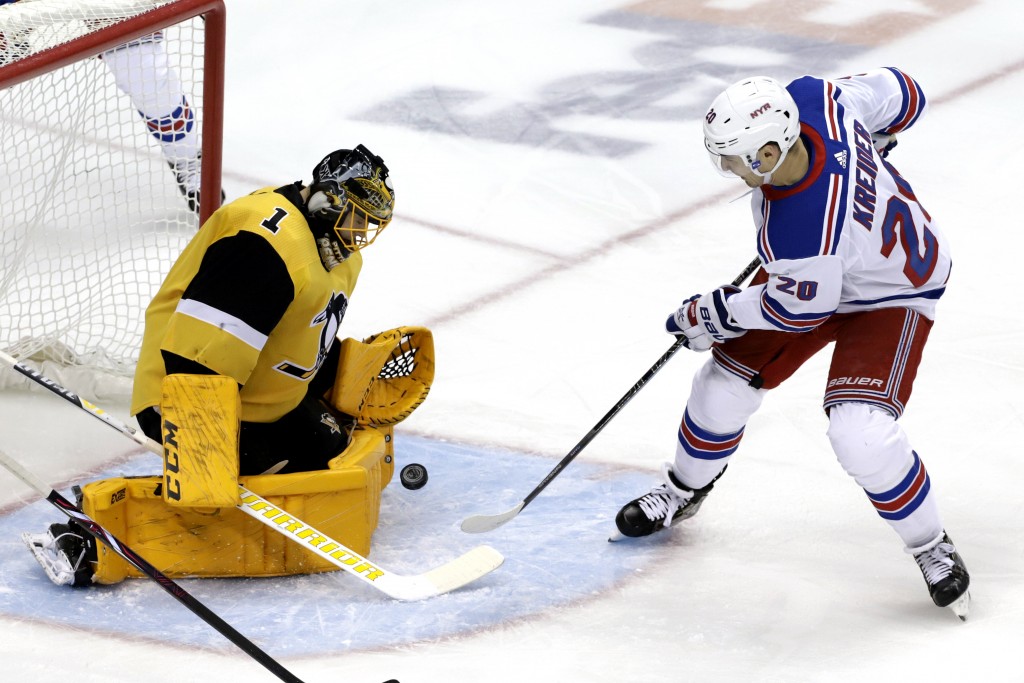 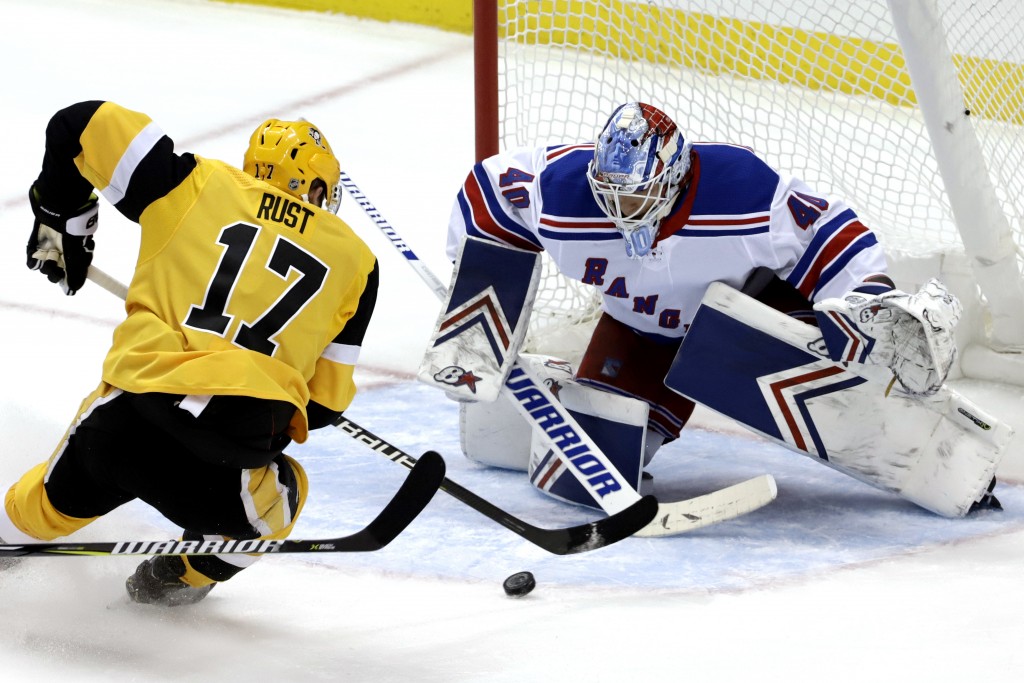 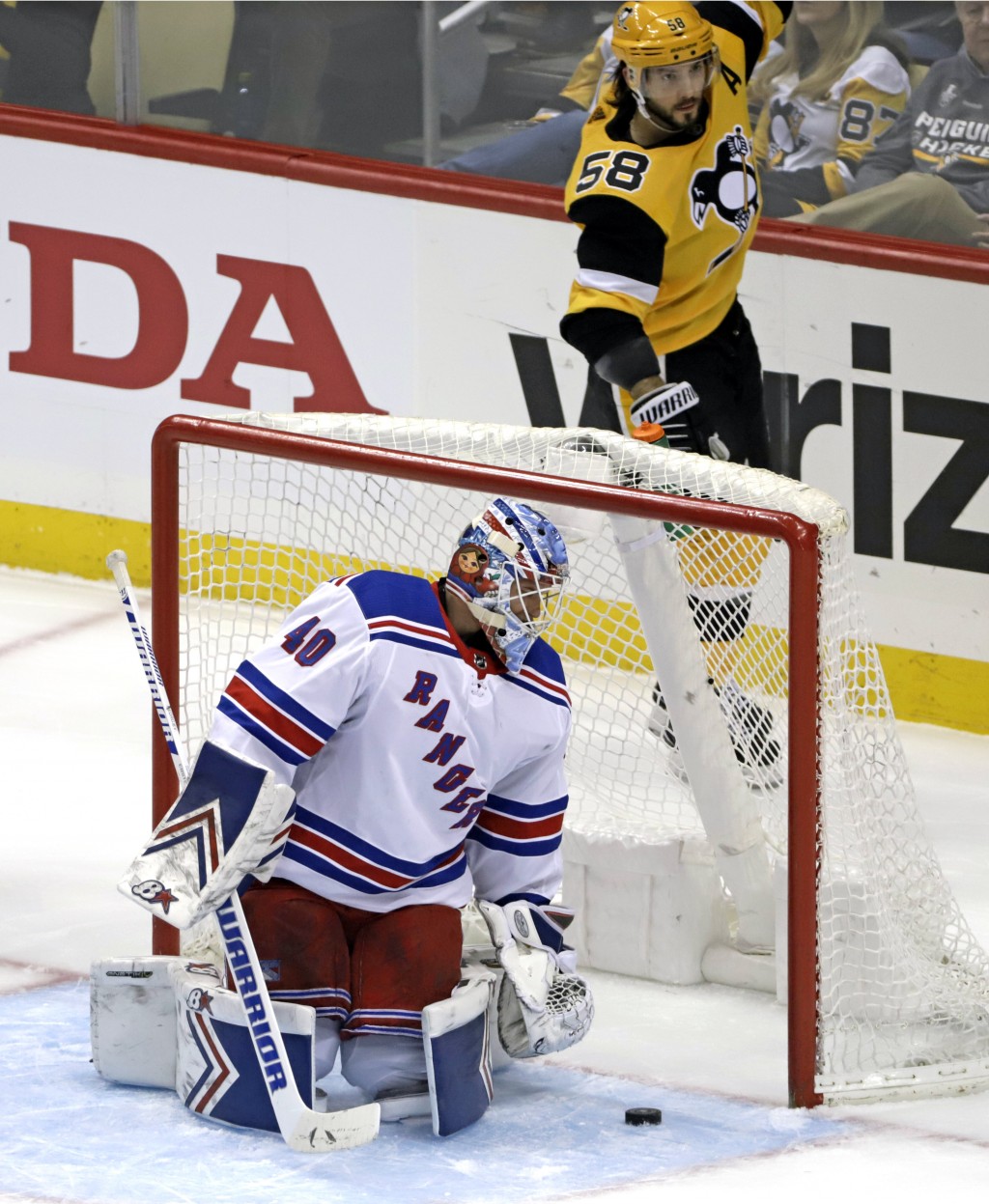 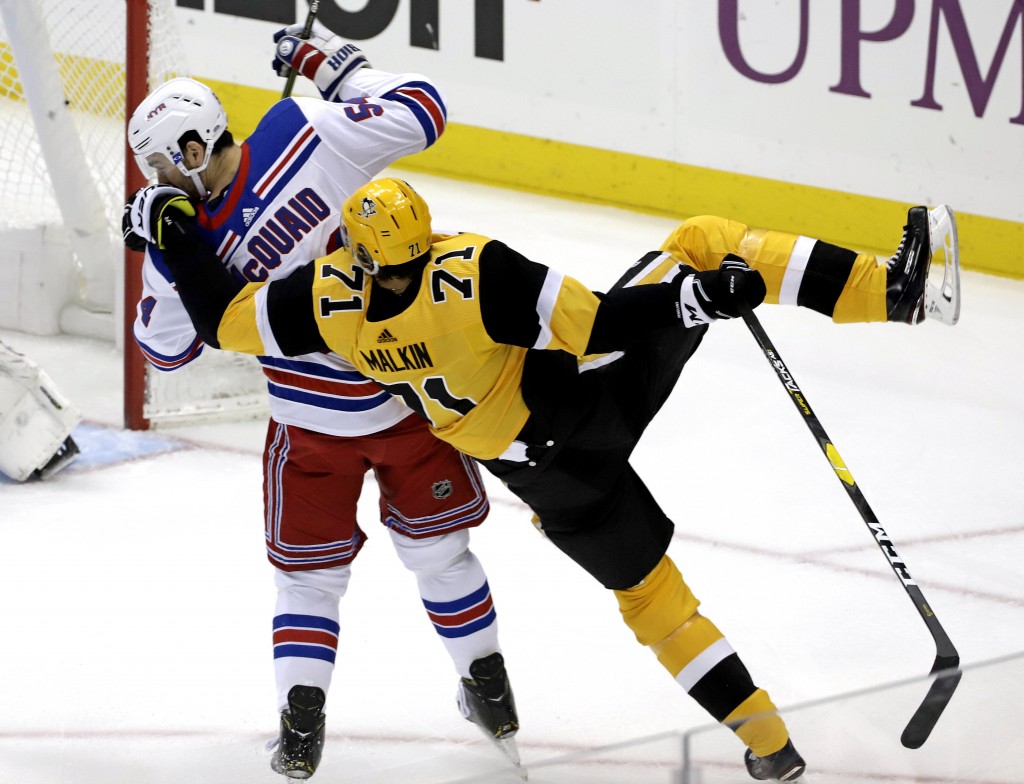 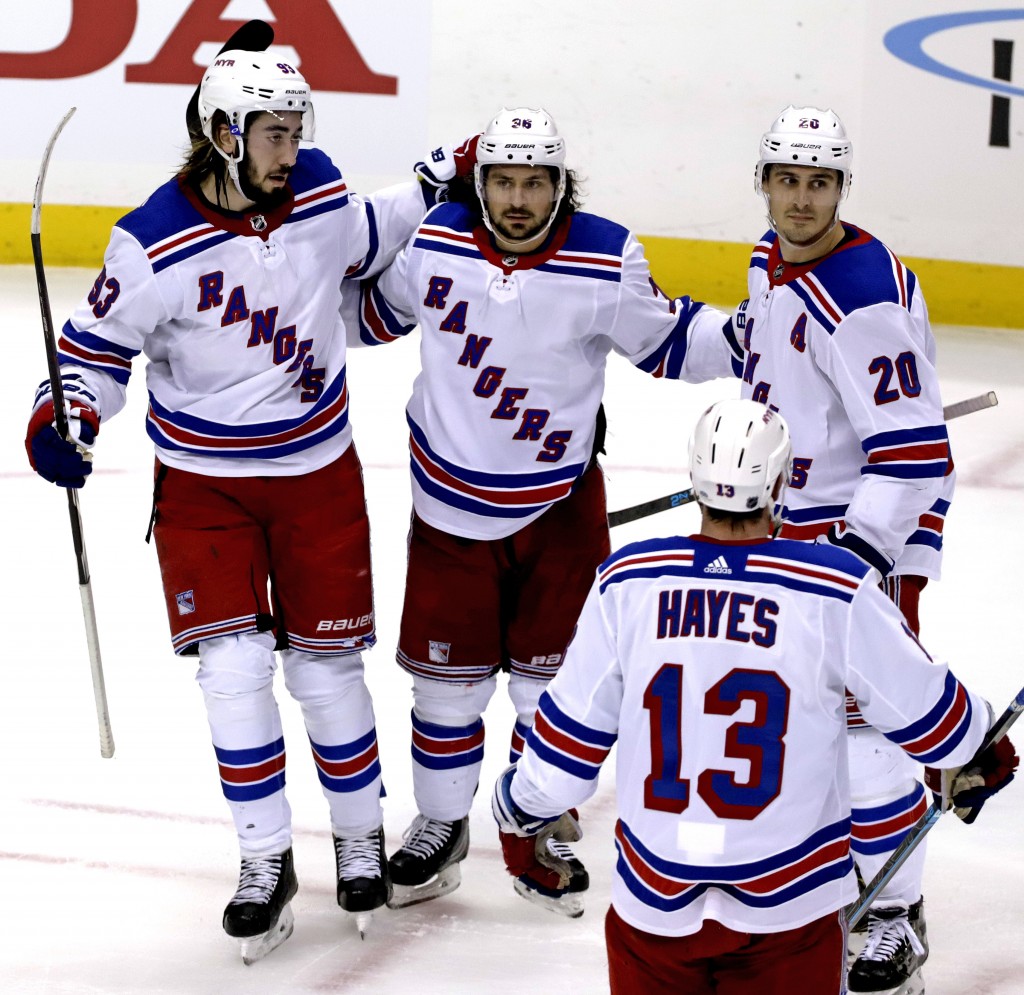 PITTSBURGH (AP) — Evgeni Malkin and Kris Letang each had two goals, and the Pittsburgh Penguins climbed back into playoff position with a 6-5 win over the New York Rangers on Sunday.

Defensemen Marcus Pettersson and Brian Dumoulin also scored for the Penguins (31-21-7), who leapfrogged the Carolina Hurricanes for the second Eastern Conference wild-card spot.

Mats Zuccarello had two goals, and Kevin Hayes and Mika Zibanejad scored over the game's final 5:46 for the Rangers, who couldn't complete a second rally after erasing a 3-1 deficit to tie it late in the second period.

The Rangers were not able to take the lead during a four-minute power play that spanned the second intermission. Forty-nine seconds after that penalty expired, Letang took a feed from Sidney Crosby and beat goalie Alexandar Georgiev.

Malkin then scored twice in a span of 2:31 to give him four goals in two games since serving a one-game suspension for a stick-swinging incident.

Crosby had three assists to give him 11 points in his past five games, helping to atone for the high-sticking double-minor that gave the Rangers a prime chance to take the lead.

The Penguins had won just seven of their previous 17 games to fall in danger of missing the postseason for the first time since 2005-06.

Malkin has had, by his standards, an off season. But he has points in seven consecutive games that he has played over the past month, interrupted by missing five games with an upper-body injury and the one game because of suspension.

It was the first time all season the Penguins got four goals from defensemen.

Zuccarello's goals were his 10th and 11th, each tying the game. Ryan Strome also scored for New York, which had won three of its previous five.

NOTES: The Rangers scratched D Brady Skjei (lower-body injury sustained during Friday's game), C Brett Howden (MCL sprain) and RW Jesper Fast. Fast scored during Friday's win but has reportedly been dealing with an undisclosed injury. ... Penguins D Chad Ruhwedel was in the lineup for the third consecutive game after having not played prior to that since Nov. 19. ... Penguins LW Tanner Pearson was a healthy scratch for the second consecutive day after he had been in the lineup for every game since his acquisition from the Los Angeles Kings in November.

Penguins: Continuing a stretch of four divisional matchups over a five-game span, the Penguins play at New Jersey on Tuesday.