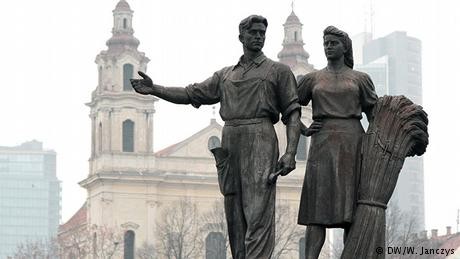 When Lithuanian police and counterintelligence agents came knocking at the door of a villa in an affluent neighborhood of the capital Vilnius they had an inkling they were dealing with one of the most unusual cases in the history of VSD, the Baltic country's domestic security service. The property worth more than one €1 million ($1.13 million) was one of the leads in an espionage hunt that involved former diplomat and MP Algirdas Paleckis, scion of one of the country's most famous — and controversial — political dynasties.

Paleckis' apparent mistake was that he fully paid back the mortgage on a house too quickly which attracted the attention of the Lithuanian authorities and led to his arrest. Paleckis claimed it was a gift from his relatives. However, his activities as leader of the Socialist People's Front, a fringe left-wing organization that opposes Lithuania's NATO membership and often mimics the Kremlin's propaganda line, only deepened the suspicions.

In a country of less than 3 million people, where everyone knows everyone, the Paleckis' family name is well-known and highly symbolic. Algirdas is the grandson of Justas Paleckis who, in 1940, signed a letter asking the Soviet leadership under Joseph Stalin to admit Lithuania into "the brotherly family of Soviet peoples." In 1990, Algirdas' father, Justas Vincas, turned his back on his own father's legacy. As a newly elected member of the Lithuanian parliament he became one of the signatories of the act which restored Lithuania's independence.

From pro-Western to pro-Russian

Born in 1971 in Bern, where Justas Vincas served at the Soviet embassy, Algirdas Paleckis led a comfortable life as a member of Lithuania's political elite after the country regained its independence in 1990. He became a diplomat and later a member of the national parliament, the Sejmas, for his father's Social Democratic Party. His public positions back then were firmly pro-Western.

But 10 years ago that changed. Paleckis fell out with his fellow Social Democrats and became a vociferous critic of Lithuania's domestic and foreign policy, eventually being expelled from the party. As leader of the Socialist People's Front, the party he created in 2008, he frequently appeared on Russian state TV blasting Lithuania's membership of NATO and the EU.

His perceived pro-Russian stance put him in the spotlight. "We in Lithuania consider ourselves a front-line state. It must cope with Russian espionage and massive propaganda onslaught every day. It's no surprise that Paleckis' activities and his support for [Russian President Vladimir] Putin came under intense scrutiny," Ramunas Bogdanas, Lithuania's leading political columnist, told DW.

"I think it was his wife's influence," a former university acquaintance of Paleckis told DW. Olga is Russian and her father is said to have been an officer with the Soviet KGB, and later with its Russian successor agency, the FSB. The person, who declined to be identified by name, said he was convinced that Paleckis fell victim of a long-term Russian recruitment operation. "The money to pay back the mortgage was probably Moscow's first step towards the entrapment," he said.

His brother Rimvydas, a well-known journalist, declined to discuss his brother's family connections with Russia, but told DW he was "shocked" by what had happened. "Algirdas writes to me from detention and claims he will clear himself during trial. I hope that's true because in Lithuania we have the rule of law." He said that he had never shared his brother's political views. "I told him: 'If you want to make Lithuania more prosperous, more just and democratic, you should work on it here, and not rush on Putin's TV to attack your own country.'"

A spokesperson for Lithuania's domestic security service declined to comment for DW, citing the ongoing investigation. Until the case is brought to court it's unlikely the public will learn exactly what kind of espionage Paleckis is accused of. Most espionage cases in Lithuania involve Russian agents trying to gather information on military infrastructure, energy supply grids or trying to bug officials. Given Paleckis' political position and his activities it's unlikely he would be let even close to military installations or sensitive information.

One version of events appears plausible. The Lithuanian news portal lrytas.lt reported that Paleckis has been involved in gathering information — including private details — on investigators and prosecutors who are working on the so-called January 13 case that is addressing the bloody events of 1991, when 14 civilians were killed by Soviet forces who were trying to crush the pro-independence movement. The trial, which started in 2016, aims to establish the culpability of the Soviet party leadership and their local collaborators. A verdict is expected in March.

Read more: The January bloodbath in Lithuania 25 years on

The authorities' silence on Paleckis has led the media and public to speculate on the outcome. "I am convinced this silence actually means they have a very good case — and it involves a ring of agents of Russian influence," Marius Laurinavicius, an expert with the Vilnius Institute of Policy Analysis, told DW.

"They have to build a waterproof case and do not want to spill the beans before it is time to go to court." Laurinavicius, who has written a book on Russia's influence abroad, says the January 13 trial was very likely Paleckis' target. "It is an important warning for the EU," he said. "It shows that Russian security services are targeting the elites in their recruitment efforts. That someone who led such a comfortable life like Algirdas would turn on his own country means that Russian persuasion methods are powerful."