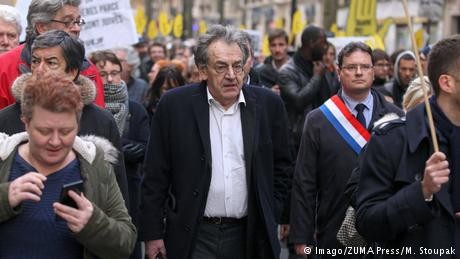 Paris prosecutors on Sunday announced an investigation over the anti-Jewish insults against Finkielkraut on the sidelines of a yellow vest demonstration in Paris.

A video aired on several French news channels showed the philosopher being accosted by a group of protests who hurled anti-Semitic abuse at him on Paris's Boulevard du Montparnasse.

Among the words heard were "dirty Zionist," "we are the people," and "France is ours."

"I sensed an absolute hatred and unfortunately this isn't the first time,” Finkielkraut told France's Journal du Dimanche newspaper. "I would have been afraid if the police hadn't been there. Fortunately they were.”

Finkielkraut, one of the most controversial figures in French public debate, told the Parisien newspaper he believed his "notoriety” and his professed attachment to Israel had given rise to the insults, as well as a general "strong feeling of hostility toward the Jews" in France.

Finkielkraut said he came across a group of protesters, and approached them out of curiosity. He said he heard some of the insults, including someone telling him to throw himself into the canal.

Once a supporter of the demonstrations, Finkielkraut has since withdrawn his support.

"I no longer support the demonstrations. It's becoming grotesque," Finkielkraut said on Sunday. "It's a movement that no longer knows how to stop."

The charge to be investigated was the "public insult on the grounds of origin, ethnicity, nationality, race or religion."

Finkielkraut is the son of a Polish Jewish maker of fine leather goods who survived the Auschwitz concentration camp.

The insults prompted a flurry of condemnation for the protesters, including from French President Emmanuel Macron.

"The anti-Semitic insults he has been subjected to are the absolute negation of who we are and what makes us a great nation. We will not tolerate them," Macron said on Twitter.

The increasingly divided "yellow vest" movement has held protests every Saturday since November 17, with some rallies on Sunday to celebrate the movement's three-month birthday.

The French government on Tuesday said that anti-Semitic acts in France rose 74 percent in 2018 compared with the previous year.

This month, swastikas were sprayed on portraits of the late French politician and Holocaust survivor Simone Veil.

Last week, the word "Juden" was spray painted on the window of a Parisian bagel bakery.