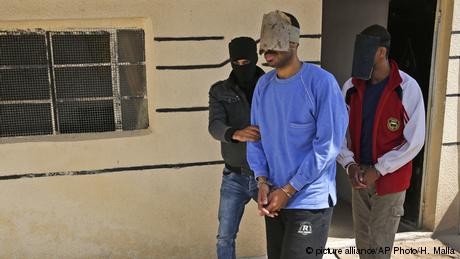 "The United States is asking Britain, France, Germany and other European allies to take back over 800 ISIS fighters that we captured in Syria and put them on trial. The Caliphate is ready to fall. The alternative is not a good one in that we will be forced to release them," he wrote on Twitter, using another acronym for the extremist group.

"The US does not want to watch as these ISIS fighters permeate Europe, which is where they are expected to go. We do so much, and spend so much - Time for others to step up and do the job that they are so capable of doing. We are pulling back after 100% Caliphate victory!" he continued.

The US-backed Syrian Democratic Forces (SDF) have captured around 800 fighters, 600 women and more than 1,200 children from dozens of countries in the Kurdish-led force's offensive against the nearly vanquished IS.

European governments have been wary of repatriating their citizens who went to fight for an IS "caliphate" in Syria and Iraq, fearing the political repercussions of bringing back extremists following a series of jihadi-inspired attacks in France, Germany and elsewhere in Europe.

However, an impending US military withdrawal has created rising uncertainty about the security situation in Syrian Kurdish-controlled areas and the threat that European IS fighters could return home to carry out terror attacks.

Syrian Kurdish authorities told DW earlier this month that several dozen German national IS fighters, women and their children are in their custody.

The German Foreign Ministry has said it is unable to provide consular assistance to German detainees in Syria due to the security situation and absence of diplomatic ties with Damascus.

France has recently hinted that it may repatriate and prosecute French IS fighters captured by Syrian Kurdish forces.