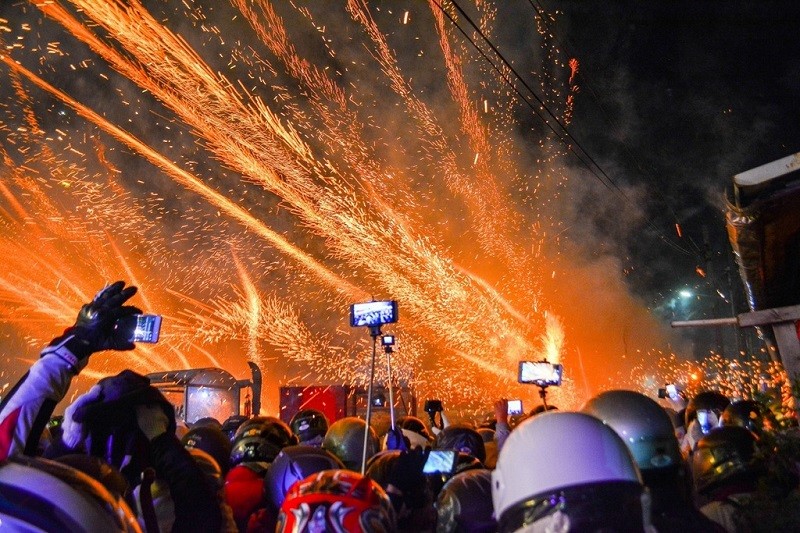 TAIPEI (Taiwan News) – Many places in Taiwan have been holding activities to celebrate the traditional Lantern Festival, which falls on Feb. 19 this year. Here is a list of popular activities that are currently taking place or will take place soon.

The 2019 Taiwan Lantern Festival will take place at the Dapeng Bay National Scenic Area from Feb. 19 to March 3. Performances on the main stage will feature "a main theme and a main show" at Dapeng Bay, every night during the festival, including performances from Voalá of Spain that combine aerial acrobatics and dances, a Korean drumming troupe, and Taiwan’s U-Theatre drumming troupe.

This year’s Yanshui Beehive Fireworks Festival will be held on Feb. 18 and 19. The festival is listed as one of the world's three major folk festivals.

CNN called the festival “undeniably one of the world's most dangerous celebrations” as thousands of soaring firecrackers are launched into the crowd. Therefore, festival-goers must wear protection gear to avoid getting hurt. The lantern artworks by art groups from 20 countries, including France, Japan, and Brazil, have turned the Yuejin Harbor Water Park in Yanshui District (鹽水區) of Tainan City into a dreamlike atmosphere. This year's festival will last through Mar. 3. The lanterns will be lit from 5:30 p.m. to 11 p.m. daily during the one-month long festival.

In addition, artistic lantern works created by college students will be added to the display in the Qiaonan Old Street (橋南老街) lantern area, presenting a new perspective for the annual visual feast. The 2019 Taipei Lantern Festival will take place from now through Feb. 24. The venue stretches from the plaza in front of the Ximen Red House (紅樓) along Sec. 1 of Zhonghua Rd. (中華路), Zhongxiao West Rd. (忠孝西路), and all the way to North Gate and Taipei Travel Plaza beside the Taipei Main Station.

During the entire festival period, street artists will be invited to give spectacular performances in the evenings at different lantern areas. The 2019 Taoyuan Lantern Festival from Feb. 12 to Feb. 24 is set along an 8-km stretch of the Nankan River (南崁溪), and the design of the four lantern areas are based on the theme of “fairy tales,” which include elements from famous stories for children, such as Aladdin and His Wonderful Lamp, The Wizard of Oz, The Nutcracker and The Mouse King, and Alice in Wonderland.

Hsinchu City’s artistic lantern festival officially kicked off on Jan. 25. The viral “Cosmos Pig” main lantern along with other artistic lantern works are on display along the ancient city moat and the East Gate traffic circle

Among the many scientific and interactive lantern artworks on display, the most attractive work of art is a giant sphere representing the Earth, which is hanging above a square. When it is lit at night, it looks exactly like the Earth seen by NASA astronauts from the moon 50 years ago, the agency noted. The 2019 Kaohsiung Lantern Festival, which will take place through Feb. 20, is set along the Love River with waterfront lantern displays. A number of show biz artists will also attend the festival and have fun with the public together.