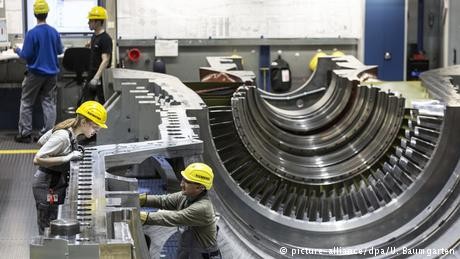 A scandal that saw several power plant turbines sold by German industrial giant Siemens to Russia in 2015 and 2016 but delivered to the Russian-annexed Crimean peninsula, violating EU sanctions, was an "individual" error, Siemens CEO Jo Käser told DW on Saturday.

Speaking on the sidelines of the Munich Security Conference, Käser said the firm's numerous Russian partners should not be tarred with the same brush.

"One should not interpret ... the failure of an individual in this turbine story as the collective guilt of the others," he said.

Siemens said that the turbines were ordered and delivered for a power plant project in Taman in southern Russia. But they were then transferred to Crimea by Siemens’ Russian customer OAO VO TechnoPromExport and installed in new gas-fired power plants in a breach of the sales contract.

Read more: Russia and Ukraine in 2019: More conflict ahead?

Describing the affair as "a very, very regrettable incident," Käser insisted that a high degree of trust remains between the Munich-based engineering and electrical giant and its Russian partners. After all, he said, Siemens has been present in Russia for almost 170 years.

He singled out Russian giants Gazprom, Novatek and Rosneft as close partners of Siemens, before adding that "we maintain a very trusting relationship" with almost all [Russian] companies.

The incident threatened to strain relations between Berlin and Moscow, at a time when German ministers were urging an easing of international sanctions against Russia.

Käser told DW that Siemens still planned to step up investments in Russia and sees further collaboration in the field of digitization — the firm has earmarked more than €100 million ($113 million) for the sector.

"We enjoy being in Russia. We will also promote localization in Russia, that's very important to us," Käser added.

Asked about a possible new wave of international sanctions against Moscow, Käser said he was "always very worried" whenever a possible escalation was mooted. "Usually, the economy suffers, and in the end, people suffer, so therefore these sort of escalations are unfortunate."

The United States and European Union have imposed several rounds of sanctions against Russia and its nationals since Moscow's military intervention in the Ukraine crisis.

The penalties contributed to the collapse of the Russian rouble on currency markets and a domestic financial crisis but also hurt the economies of several EU countries — including the profits of several large German companies.

The US Congress, this week, introduced a bill that seeks to step up punishment of Moscow for its "malign influence" in countries such as Ukraine and allegations of Russian interference in the 2016 US presidential election.

US lawmakers are keen to restrict the development of Russian gas pipelines among other activities.

Washington and Brussels are said to be coordinating efforts to step up sanctions against Moscow.