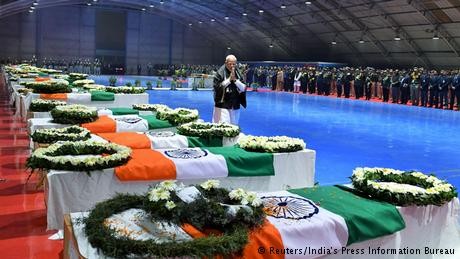 Thousands of mourners gathered for funerals of Indian paramilitary police officers across the country on Saturday, a day after the suicide bombing which claimed at least 41 lives in India-controlled Kashmir. TV footage showed coffins wrapped in Indian flags carried by crowds in the troops' home towns.

Read more: Why Kashmir attack could spark a military confrontation in South Asia?

The perpetrators of the attack will be found "no matter how much they try to hide," Indian Prime Minister Narendra Modi said at a public rally on Saturday, adding that India's security forces had been given "full freedom" to mount a response. "When, where, by whom - our soldiers will decide."

Angry crowds also attacked Kashmiri students and businessmen in the Indian town of Dehradun, according to media reports. Some TV channels have also called for India to go to war against Pakistan. The calls for retaliation come as Indian politicians are preparing for national elections in the spring.

Military experts have already speculated about attack options, ranging from airstrikes to ground attacks on Pakistani troops in Kashmir, according to the Times of India.

Under the command of General Hooda in 2016, Indian troops reportedly launched "surgical strikes" by deploying special forces against militants in the Pakistan-controlled area of Kashmir as a retaliation for an earlier attack. Pakistan denies the strike ever took place.

Talking to the AP news agency on Saturday, the retired general said he hoped all sides would do some "rethinking and reconciliation."

"I just hope this all leads to some introspection, some deep thinking and engagement to do everything afresh and rethink what we all should be doing to settle issues once for all," he said.

Pakistan has rejected India's accusations in the wake of the attack. Speaking at the sidelines of Munich Security Conference on Saturday, Pakistan's Foreign Minister Shah Mahmood Qureshi said he was disappointed by India's "knee-jerk reaction" without proper investigation.

"Share evidence with us, we will investigate it with integrity and see what the reality is," he was quoted by Pakistan's Geo News as saying.

Parallel to the tensions with India, Pakistan was also facing a crisis with its other neighbor Iran, after Tehran accused another group of Pakistan-based militants of conducting a strike which killed 27 members of Iran's Revolutionary Guard on Wednesday.

"If they do not punish them, our retaliatory measures will be carried out," Jafari said, accusing Pakistani security forces of harboring the militants.

India and Pakistan both administrate parts of Kashmir and both claim the volatile region in its entirety. The two countries have fought three wars since gaining independence from the UK in 1947. Some 500,000 Indian troops are currently stationed in Muslim-majority Kashmir, making the Himalayan region the most militarized zone in the world. Both India and Pakistan have nuclear weapons.

On Saturday, New Delhi said the US expressed full support for India's right to defend itself.

US National Security Adviser John Bolton and his Indian counterpart Ajit Doval "vowed to work together to ensure that Pakistan cease to be a safe haven for JeM and terrorist groups that target India, the US and others in the region," according to the readout of the call provided by India's foreign ministry.