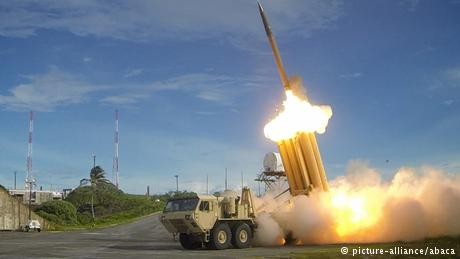 Behind closed doors, down a long, winding hallway at the Bayerische Hof hotel — home to the Munich Security Conference (MSC) — conversations are taking place that are too complex for the public stage. Or perhaps too delicate. One such conversation is "the future of nuclear deterrence in Europe."

Read more: Munich Security Conference 2019 — who can save the liberal world order?

Those present for the talks said they focused on the demise of the Intermediate-Range Nuclear Forces (INF) Treaty and Russia's announced intention to restart the development of medium-range rockets. "Things could get worse than they already are," one participant in the closed-door meeting told DW, referring to the New START treaty between the US and Russia which covers strategic nuclear weapons and is set to expire in 2021.

Threat to the world order

On the main stage, German Chancellor Angela Merkel reminded attendees that the New START treaty had its beginnings at the MSC in 2009. The world has changed quite a bit since then. "With our elementary interests, we will try everything to take steps towards disarmament," she said. "Because the answer cannot now be to blindly [build more arms]." Merkel's view that a new nuclear arms race between the United States, Russia and China must be stopped is shared by many Europeans.

It's within this geopolitical context that talks about France's nuclear arsenal are taking place — behind closed doors, of course. The chairman of the MSC, former German Ambassador to the US Wolfgang Ischinger, called for France's nuclear deployment capabilities to "cover not just its own territory, but the terrority of its EU partners as well." In addition, the six European NATO members that have the capable aircraft could join together to form a "European nuclear force," wrote Klaus Naumann, a retired four-star general in Germany's military, the Bundeswehr, in an article for the Security Times. However, Naumann himself acknowledged that France would "never share" its nuclear weapons with the European Union.

The simplest option would be for France to offer its EU partners a kind of security guarantee. Article 42 of the Lisbon Treaty, which forms the constitutional basis of the EU, refers to the obligation of mutual assistance. France could invoke this article as the legal basis for extending its nuclear protection to the entire bloc. However, the rest of the EU would have no say in its deployment. France also would have to bear the costs of maintaining its nuclear arsenal all on its own, something which is estimated to amount to roughly €3 billion ($3.4 billion) every year.

Read more: What is the INF nuclear treaty?

Back in 2007, then-French President Nicolas Sarkozy offered Germany limited participation in its nuclear arsenal, with the caveat that it also takes on some of the costs. Chancellor Merkel and her then-foreign minister, Frank-Walter Steinmeier, rejected the proposal. France's nuclear arsenal is largely based on submarines, along with cruise missiles that can be fitted to aircraft. The French government has traditionally been very secretive about its nuclear weapons program. Experts estimate the country has around 300 nuclear warheads, which would make it the third-largest nuclear arsenal in the world. However, it still lags far behind the US and Russia, both of which are believed to have more than 6,000 warheads.

According to Roderich Kiesewetter, the security policy expert for Chancellor Merkel's conservative Christian Democrats (CDU), the ongoing discussion surrounding France's nuclear arsenal is premature. He would prefer to negotiate the current international arms treaties, particularly with Russia. The aim now is "not to play into the hands of those in the US who want to disconnect from Europe," Kiesewetter told DW in Munich.

There are also skeptical voices coming out of Paris. Having sovereignty over its nuclear arsenal is essential for France's strategic self-image. To this day, France has not joined NATO's Nuclear Planning Group. "It's not enough to say: The French will provide the nuclear deterrence and the Germans will provide the money," Francois Heisbourg of the Foundation for Strategic Research think tank in Paris told DW. There needs to be a strategic debate, he said, over doctrine, participation and how the weapons would be deployed. When asked whether that kind of debate could take place in Germany, Hiesbourg simply laughed. Later, he asked Merkel whether she had any regrets during her long time in office. "We often need a very, very long time to decide on something," she said.