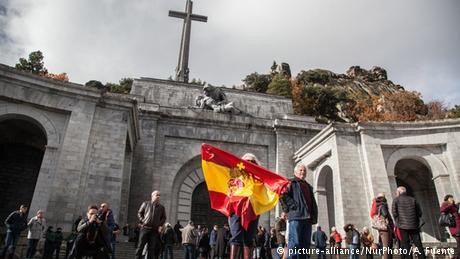 Luis Alfonso de Borbon, great-grandson of Francisco Franco, is leading opposition to the Spanish government's attempt to move the remains of the Spanish dictator to a "discreet" place.

On Friday, the Spanish government told Franco's family it has 15 days to remove his remains from the opulent mausoleum in the Valley of the Fallen.

But Borbon, a pretender to the defunct French throne, has refused to move the late Spanish dictator's remains, leading a media campaign called "Don't touch the valley."

"When you attack Franco, you attack my family, over half of Spain, the monarch and the Church, which protected him," said de Borbon in an October interview with daily Spanish newspaper La Razon.

Borbon, who was raised by Franco's only child Carmen, is seen as sympathetic to rightwing politics. He frequently shares social media content from the leader of far-right Spanish party Vox, Santiago Abascal.

After Carmen Franco died in 2017, Borbon took over the Francisco Franco Foundation, which aims to defend the dictator's legacy. He serves as vice president of Venezuelan bank Banco Occidental de Descuento His father-in-law Victor Vargas, commonly referred to as "Hugo Chavez's banker," owns the Venezuelan bank.

Franco's rule, from 1938 to 1975, was characterized by authoritarian rule and brutal political repression. Thousands of political prisoners and disappeared people still remain missing, even four decades after his rule ended with his death.