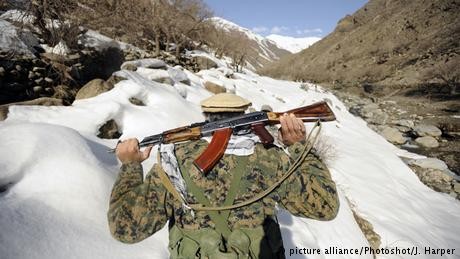 The Afghan delegation has unexpectedly kept a low profile during this year's Munich Security Conference. Although Afghan President Ashraf Ghani is present at the gathering, which has also seen the participation of German Chancellor Angela Merkel, US Vice President Mike Pence and other world leaders, Ghani's interaction with the media has been quite negligible.

Surprisingly, the conference organizers have also not put the Afghan conflict high on their agenda. This leaves one wondering why such an important global issue receives so scant attention at the conference?

The Munich conference could've been a great platform for President Ghani and his delegation to explain their position on the ongoing US talks with the Taliban. Kabul feels increasingly cornered as the talks do not really involve the Afghan government.

Taliban insurgents have made it clear that they would not talk to Afghan authorities. Instead, they have chosen to interact with the Afghan opposition and other regional and global players.

This year's Munich Security Conference could have been a big opportunity for Afghan officials to lobby influential foreign policy and security policymakers from other countries and make sure that Kabul remains a key player in Afghan peace talks.

But President Ghani's Spokesman Haroon Chakhansuri dismissed claims that Kabul was being sidelined by the US in peace talks.

"The Afghan government is involved in every way. Nobody can isolate it from the peace process. Without direct talks between Kabul and the Taliban, there won't be any permanent peace in Afghanistan," Chakhansuri told DW at the Munich Security Conference 2019.

"I also want to make clear to the Taliban that they can't win militarily. Our neighboring countries need to support direct talks between Kabul and the Taliban," he added.

But recent rounds of the peace talks in Qatar and Russia have excluded the Afghan government. Pakistan, which is trying to broker a deal between Washington and Islamist insurgents, is expected to hold another round of talks in Islamabad on Monday. The upcoming talks also reportedly exclude the Afghan government.

Some analysts are of the view that the US, in spite of its reservations about Islamabad's alleged support to Islamists in the region, is giving Pakistan an upper hand in Afghan politics. Many have likened the post-US withdrawal scenario to the one in the late 1980s when the departure of Soviet forces from Afghanistan plunged the country into a violent civil war.

One of the key Taliban demands for talks is that the US completely withdraws its troops from the war-torn country. US President Donald Trump has also hinted at taking his country's troops out of Afghanistan. But Jaap de Hoop Scheffer, a former secretary general of NATO, warned against it.

"I am concerned that the withdrawal plans are being hurried up. If the US goes ahead with it, it will be a new tragedy for Afghans. The people of Afghanistan deserve long-term support," Scheffer told DW.

"But let me be clear that nobody is interested in a permanent military presence in Afghanistan, so it will happen some day. Afghans must understand this," he added.

Chakhansuri said that the Taliban's demand for the withdrawal of US troops from Afghanistan should be part of talks but shouldn't be a condition.

But William Cohen, former US secretary of defense under President Bill Clinton, believes it won't be easy for Trump to pull troops out of the country.

"We have a president who says one thing today and tomorrow another. He is unpredictable. Even if Trump goes ahead with the withdrawal plan, he needs approval from US Congress. So everything is unclear at the moment," Cohen told DW.

Afghan President Ghani is increasingly cutting an isolated figure, something that observers could also glean from this year's conference in Munich.

In an interview with the privately owned ToloNews TV earlier this month, Ghani expressed his anger over Moscow talks involving Afghan opposition politicians, arguing the attendees did not have the executive power to translate decisions into action.

"They could hold a hundred such meetings, but until the Afghan government, the Afghan parliament and legal institutions of Afghanistan approve it, it is just agreements on papers," he said.

Ghani reportedly plans to call a Loya Jirga (the grand assembly of Afghan elders) in March to discuss the future of the country. But experts say it is a risky plan as a decision against Ghani could diminish his role as president.

But Chakhansuri, the presidential spokesman, said that the Loya Jirga would only be part of President Ghani's consultative initiatives in order to involve all Afghans in the peace process, adding that it could guide the government on how to proceed with the talks with the Taliban.

This year's Munich Security Conference may be regarded as a platform for international consultations. Back-channel talks and lobbying must have taken place, but the voice of Afghanistan's elected government could not be heard clearly.