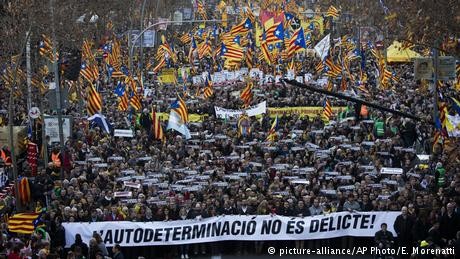 Spanish authorities on Saturday said around 200,000 protesters marched through Barcelona against the trial of 12 Catalan separatist leaders, calling for them to be released immediately.

The march was led by a line of protesters holding a long banner that read "Self-determination is not a crime." Other banners described the Catalan leaders on trial as "political prisoners."

"It's a political trial, full of manipulations to sentence them for something that isn't a crime," said one protester, who leads a group of "castellers," or human towers. "They just want to lock them up and as they know that voting isn't a crime, they're inventing violence that never happened."

Earlier this week, Spain's Supreme Court opened the trial, with nine of the defendants having been held in detention without bail since late 2017.

The defendants are on trial for their involvement in a botched independence bid. The charges include misuse of public funds, sedition and rebellion, the latter being the most controversial, given it is legally defined as "rising up in a violent and public manner."

But they have denied using violence. "If you read, listen and observe our actions, no one could have the least doubt that we reject violence," Junqueras said at his hearing earlier this week.

Read more: Spain asks: Is monarchy right for us?

Despite Saturday's protest, many in Spain back the trial. Earlier this month, Madrid was rocked by mass right-wing protests against Prime Minister Pedro Sanchez of the Socialist Party over his negotiations with Catalan separatists.

Sanchez called for early elections after Catalan parties he needed support from to pass a budget withdrew their support. The regional parties had demanded that Sanchez give them a way forward for a legally-binding independence referendum.

"Spain needs to keep advancing, progressing with tolerance, respect, moderation and common sense," Sanchez said. "I have proposed to dissolve parliament and call elections for April 28."

Read more: Spain: Will a snap election spell the end for Pedro Sanchez?