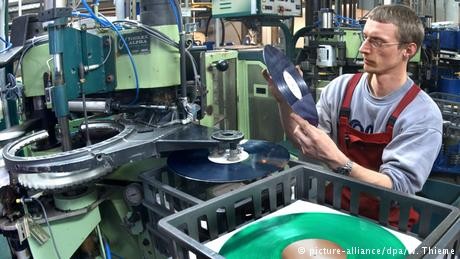 "I see you've sent my letters back,

And my LP records and they're all scratched."

So sang The Police on their track "Can't stand losing you" — or should that be EU? In the context of Brexit and a possible no deal, it may be more than a surface scratch for vinyl in terms of sales and exports from the UK to the EU and vice versa.

A decade ago, vinyl was essentially on its deathbed. The industry and consumers had embraced the CD as their format of choice. In 2007, a paltry 205,000 units were shifted, picked up mostly by analogue-craving aficionados who were in a, er, spin about music going digital.

Fast forward to today and vinyl sales in the UK have increased twentyfold, even outperforming downloads (4.2 million vinyl albums were sold in the UK last year) and are projected to keep on rising, thanks in part to acclaimed artists like the Arctic Monkeys or Jack White flying the flag for vinyl.

However that comeback could be short-lived in a no-deal Brexit scenario. Currently there are only a couple of plants still producing vinyl in the UK. The majority of records are pressed in mainland Europe. If the UK leaves the customs union, tariffs would be levied on all imports from Europe. That would have a damaging impact on sales and margin, especially for smaller, independent labels.

"Almost all the production of vinyl sold in the UK is done in EU territories whether that be the Czech Republic or Germany. All the pressing plants will remain in EU and the vinyl will have to be imported to the UK. Any delays and any additional costs go on to the cost of production and that obviously reduces profit," Ian Moss, director of public affairs at the British Phonographic Industry (BPI), told DW.

Some overseas pressing plants have said they would look into relocating parts of their operation to the UK, however given that many of the materials used in the manufacturing process also originate abroad, relocation may not be as easy as it sounds.

"Although the pressing happens externally, a lot of the movement happens from within warehouses in the UK. So it's effectively being shipped here and then shipped out around the world. So that I think is going to be one significant change as to whether self releases and small music businesses will look to handle warehousing outside of the UK," said Gee Davy, head of Legal & Business Affairs with the Association of Independent Music (AIM) in London.

For small, independent labels that additional burden and the costs could put them out of business. "The first thing is to make sure there is enough time for production to get everything across the Channel in a process which might be very difficult because of queues and delays at the border. Any increase in costs dents profits. And it's going to hit small producers, small bands. [Vinyl] is a really popular product, a premium product and it's a really important part of the mix of how labels get enough money to keep going and two thirds of our members are tiny businesses," said Moss.

Assuming that Brexit raises production costs for record labels, consumers will bear the brunt, at least partially. The average LP is not cheap as it is, retailing at €20. Asking music fans to shell out even more could put them off vinyl.

Beyond that, Brexit in a no-deal scenario will undoubtedly put a strain on the wider UK economy, forcing consumers to think twice about what they spend their money on.

Currently if you order a record at, say, Roughtrade records in London, chances are it'll be with you the next day per express delivery. However, in a no-deal post-Brexit world that smooth supply chain would hit choppy waters. Custom tariffs, border controls and increased red tape could force many smaller, independent labels/stores and emerging artists to rethink their approach to vinyl once the costs outweigh the benefits.

Then there's the issue of freedom of movement. Were that to end it would prevent emerging artists, who rely increasingly on touring to make a living, from building an international audience in mainland Europe and being able to sell their merchandise, which increasingly includes vinyl, at the venues.

Even though it's not clear yet what type of Brexit the UK is heading for, the pound is already experiencing volatility. As the majority of records sold in the UK are imported from mainland Europe, the weakness of the pound means unfavorable exchange rates and increased costs for importers which result in higher vinyl prices.

So will vinyl's revival continue given all the uncertainties and unknowns surrounding Brexit? "Vinyl's a really popular product among fans. It's a small but significant part of the market. And it's a really good product. People like the artwork and inlay and the packaging. And all of that is unique and special to vinyl and that's why it's so popular," said Moss.

That popularity, said AIM's Davy, has provided an economic spark for many small and specialist stores. "We've had reports from independent music stores within the UK that some of them have been able to expand their shops purely as a result of the vinyl revival."

Both Moss and Davy stress that the uncertainties surrounding Brexit coupled with a lack of guidance from the government make it almost impossible to predict the full impact on the industry.

Read more: How a 'hard' Brexit might affect the arts and culture

However Davy firmly points the finger at the government for ignoring the importance of the arts and culture industry overall for too long.

"You know the soft power of music is phenomenal. I think a lot of Britain's trading strength has to do with its cultural strength and I think it's an absolute tragedy the way Brexit's unfolded for the music industry. And I think it's going to be hugely damaging for many years because the government hasn't focused enough on the cultural sector."