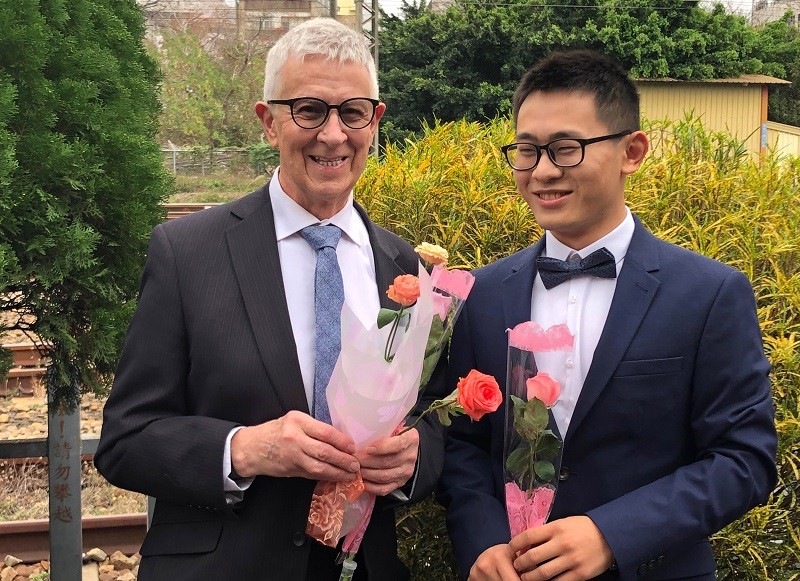 A Taiwanese and British gay couple, who are 51 years apart in age, exchanged wedding vows Saturday in a ceremony in Miaoli County that welcomed the blessing of more than 500 Taiwanese guests, despite questions raised by the age disparity between the two men.

It means a lot to see the two families get together for the ceremony, 24-year old Taiwanese Chao Shou-chuan (趙守泉) said, cheered by the blessings he received from loved ones and strangers who traveled from as far away as Taipei, Taichung and even Tainan just to present the couple with flowers.

Andrew Goodier, the 75-year-old British man, said he was surprised at the number of people who turned up at the event to show their support, mainly because Miaoli is a relatively conservative county.

The ceremony took place at the Miaoli Railway Museum near the train station in Miaoli.

The grooms, dressed in formal suits, were applauded by well-wishers, many of whom asked to take photos with the couple.

Chao credited his father, whom he said helped plan the wedding despite being subjected to much negative feedback from relatives and friends.

On Friday, the young man said his father's support was especially meaningful, because he told him: "You're the ones living your lives. Don't worry about what others think."

"I have three sons, so you don't have to shoulder the burden of bearing children to continue the family line," his father added.

Chao met Goodier three years ago when the Taiwanese was traveling in the United Kingdom while a sophomore in college.

After dating for about two and a half years, the two decided to get married.

Goodier, from Leicester, was an engineer before retiring.

Yang Tzu-ling (楊紫鈴), who used to be Chao's cram school teacher at junior high and who attended the ceremony on Saturday, said everyone is entitled to marry the person they love, adding that she hopes to see her former student stand up to the naysayers.

"What's important is how the two see each other. They do not have to care what others think," Yang said, adding that she hopes to see more people support Chao's decision.

The ceremony on Saturday was purely ceremonial because gay marriage has yet to be formally legalized in Taiwan.

Taiwan's Constitutional Court ruled in 2017 that the Civil Code's lack of provisions authorizing same-sex marriage was unconstitutional and ordered the situation to be remedied by May 2019.

The process was complicated, however, by referendums in November 2018, in which voters in Taiwan rejected overwhelmingly overturning the Civil Code's definition of marriage as a union between a man and a woman and changing the code to allow same-sex marriage.

The couple plans to get around the debate by registering their marriage in England, where they plan to live in the future.

Chao hopes to register the union before October, when he begins graduate school. Chao Shou-chuan and Andrew Goodier wed at a public ceremony near a train station in Miaoli on Feb. 16. (Photo by CNA) Nearly 500 people from around Taiwan attend the wedding on Feb. 16 to give their blessing (photo by CNA)